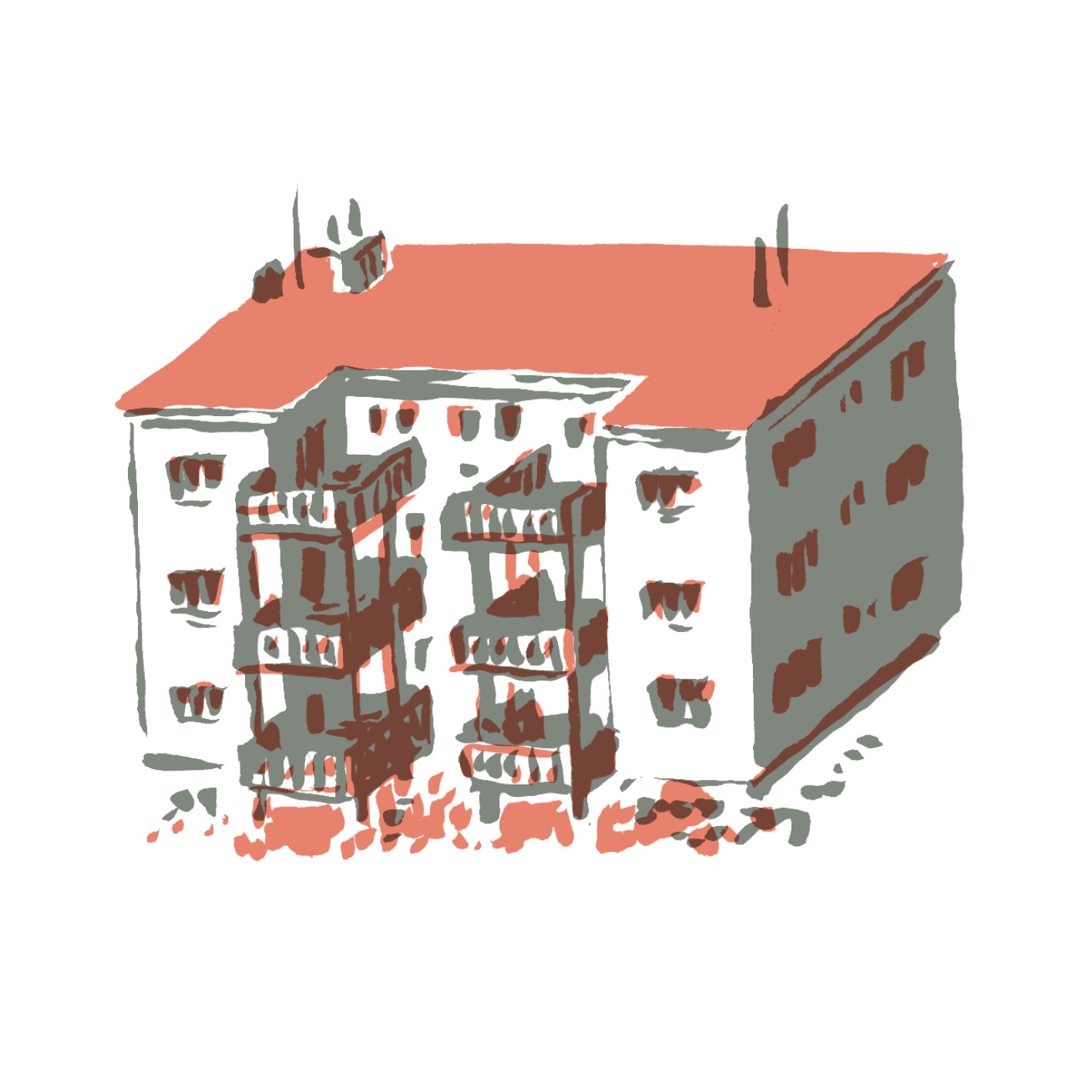 After experiments with family houses assembled from panel parts in 1946–1947 in Lesní čtvrť in Zlín, the architect Hynek Adamec and the builder Bohumír Kula reached the next level of their research at the end of the 1940s and the beginning of the 1950s. They used the technology of prefabricated reinforced concrete panels for multi-storey rental housing. In the field of development of the possibilities of residential construction, both were already active within the Baťa Construction Department, especially during the war. With the change in the political and economic situation in the city and the state after the February coup in 1948, the construction and architecture were significantly reorganised. Kula and Adamec continued their previous work in the research department of the nationalised company, which came under the administration of the Gottwaldov branch of the Československé stavební závody - ČSSZ (Czechoslovak Construction Works). The ČSSZ Research Institute was the main designer of a longitudinal three-storey residential building situated on the south-western edge of the Baťa workers' district of Podvesná. The builders of the house constructed in 1949–1951 was the Zlín National Committee. The building clearly documents the period design experiments, on which Adamec and Kula capitalised only a few years later with the G40, the first structural panel house in the country, followed by a series of types from G55 to G59.

A technological novelty of the building is the assembly structure, which tightens the individual reinforced concrete panels horizontally and vertically using metal screws. The house was made of concrete blocks with a height of one floor but only 90 or 108 cm wide. The construction of the house shows on the façade as the structure is acknowledged and creates a geometric effect of alternating vertical and horizontal lines created by the connecting parts of the panels. The building has a flat roof with a total of 18 apartments divided into 3 identical parts with separate entrances.

The simple eastern façade is rhythmically divided by the two-part and three-part windows of the bedrooms and the strips of staircase windows above the main entrances. It consists of longitudinal framed windows, between which two solid areas with decorative circles are inserted. The west side of the house builds on the contrast of the projecting self-bearing concrete balconies and the recessed parts of the façades into which the balconies are immersed. This solution of balconies resulted from the construction of the house, which should not be undesirably overloaded. The artistically treated balcony railings offer the interplay of free and full areas of concrete panels set apart from the pillars.

Each of the 3 sections of houses offers 6 identical three-room apartments with a generous layout and a floor area of approximately 70 m2. The children's and parents' bedrooms are orientated to the east, the kitchen with a pantry and the living room with access to a 6.5 m2 balcony to the west. The spacious hall and hallway connect the individual rooms with wooden herringbone floors with the toilet and bathroom equipped with bathtub and bidet. Each apartment had its own cellar in the basement and at the same time a shared laundry room, carriage house, storage space for bicycles and motorcycles, other storage space, and a room comprising a central garbage dump. Further repetition of the three-storey prefabricated house type was abandoned due to high costs. 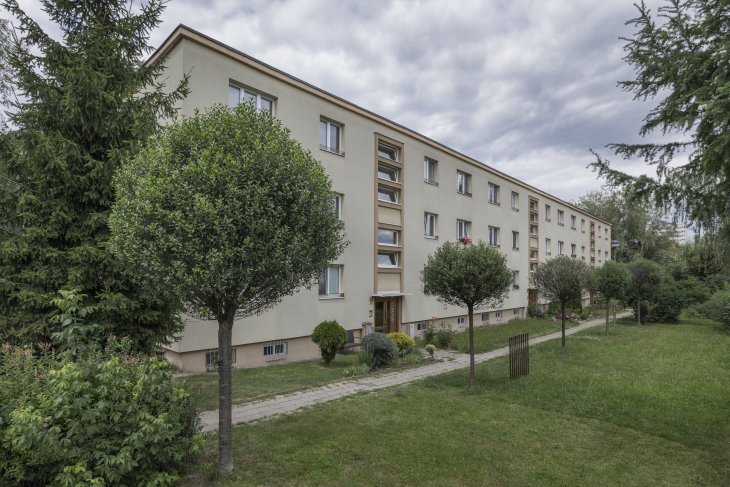 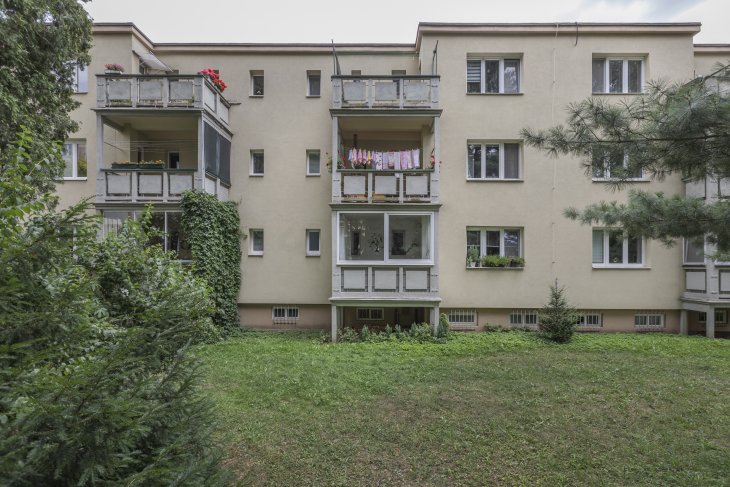 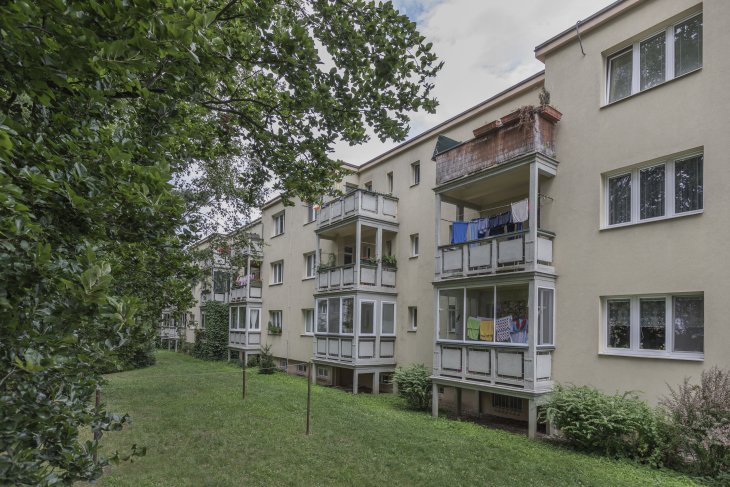 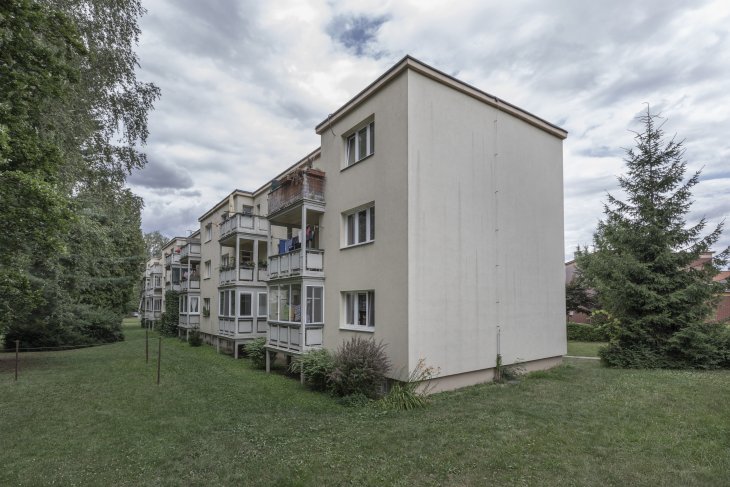