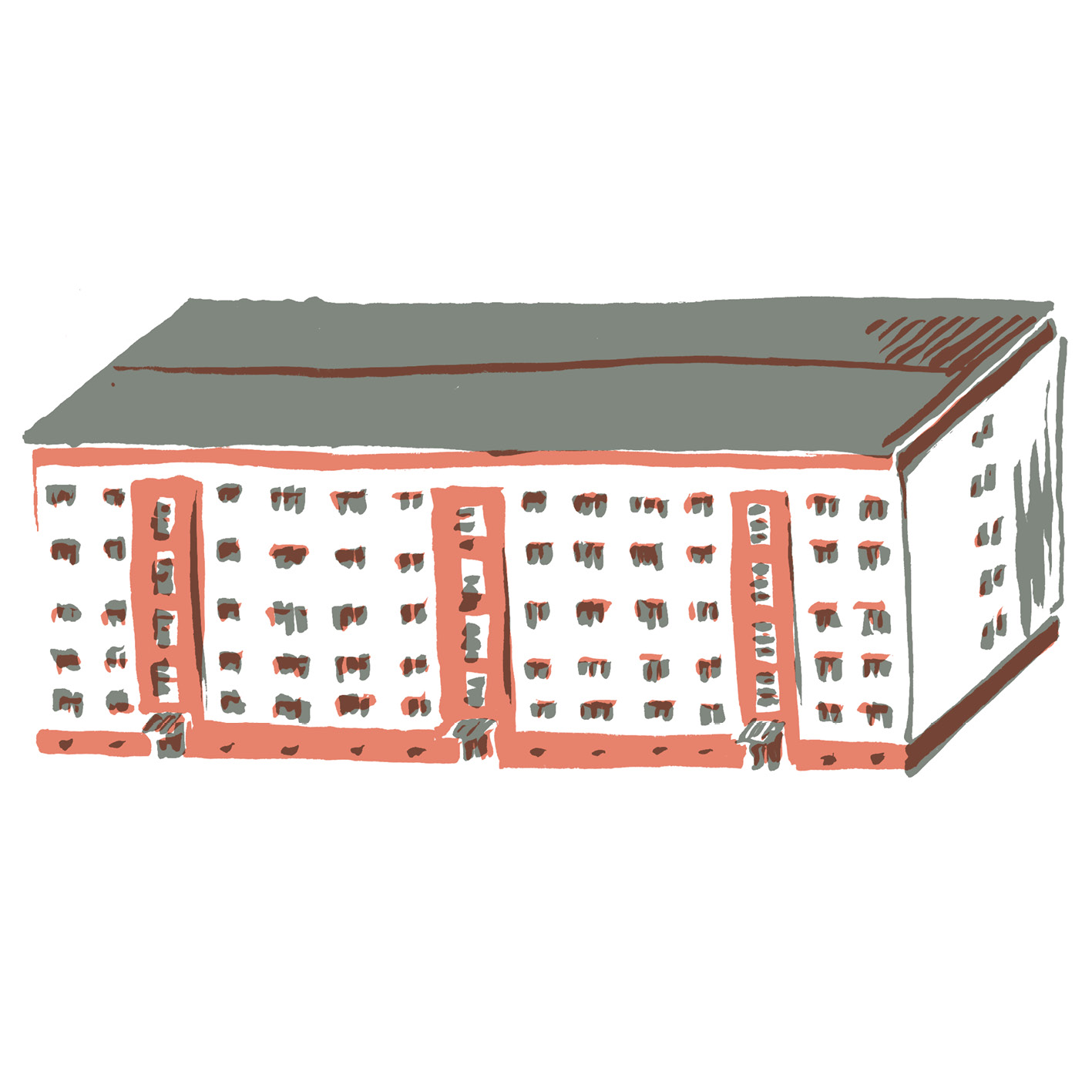 In the mid-1950s, the then Gottwaldov became a centre for the design of structural prefabricated residential buildings. At that time, the only Czechoslovak system of this kind bore the designation "G series". The first panel plant in Malenovice produced elements for the G40 prototype from the turn of 1953 into 1954, and for the G32 variant reduced by a floor and the G55 type with a corner section. These types of houses were verified in the Prague series, with panels provided for it by a panel plant in nearby Toušeň. As there were only two panel plants in the whole country, demand could not be met, and therefore G type houses were not in a position to be a nationwide phenomenon in the mid-1950s. The panel plant built in Hrušovany near Brno provided prefabricated parts for another series of prototypes, sometimes referred to as the G56 and built during 1956 in Brno. It was a modified version of the G40 type with a different technological composition of the panels.

The G57 house became the first nationwide model and it happens to be the type of panel house that is most often found in the Czech Republic to this day. Not only applied innovations contributed to its expansion, but also the mass construction of panel plants throughout the country and the political pressure for the rapid construction of cheap flats, which was promised to the inhabitants of the country by the Resolution of the Central Committee of the Communist Party of Czechoslovakia in 1958.

The Research Institute of Building Production in Gottwaldov developed six variations of the G57 type, all based on the same technology, and measurements: 3.6 m span between load-bearing panels, floor to ceiling panel distance of 2.85 m and depth of the building 11.28 m. Height ranged between three and five floors, and floor plans differed slightly - all types combined only a few basic layouts of two- and three-room apartments. Type VI worked as the only one with a distinctive end section with access to the stairs from the side of the building. An important step seems to be the possibility of arranging stair sections next to each other and thus, unlike the G40 and G55 types, creating houses of different "lengths". Another novelty was the inclusion of loggias, one of the main hallmarks of the G57 type which makes it recognisable today. All types, ie I – VI, could be built with a flat or sloping roof and could be placed more freely with respect to the cardinal directions than was the case with the G40 house which had a clearly defined orientation.

For the first time in the history of the G series prototypes were not tested in Zlín or its surroundings, but in Opava, Havířov, and then in Slovak cities. Zlín soon underwent a relatively massive development, however - since 1958, the entire residential complex, composed of G57 houses and delimited approximately by Dukelská and M. Knesla streets, has grown up in the Bartošova čtvrť. The estate represents a simple urbanism consisting of a rectangular, axially composed grid, where the uniformity is disturbed by the different height of the houses from three to five floors, and also by the prototype of the G59 house, located in the middle. Four other G57 buildings can be found east of M. Knesla Street, outside the basic axially symmetrical grid. After 1960, the housing estate expanded with other panel buildings to the east.

The G57 objects replaced the decoration in the style of socialist realism with a simple geometric grid, which strives to overcome dullness by arranging loggias in vertical strips. From each landing it is possible to enter two or three apartments, usually with two or three rooms. Only one of the six variations offered four-room and one-room flats, but these are not found in Bartošova čtvrť.

The contemporary tables testify to the rapid success of the G57 - in 1960, designers reached for the G57 house in 22.5% of cases, ie almost every fourth designed apartment building in Czechoslovakia was of the G57 type.

Bartošova čtvrť shows one of the first realisations, a very modest version of the G57 type, which, unlike its G predecessors, can take many forms. The housing estate has recently been "revitalised", the facades are now insulated and no longer maintain a uniform colour scheme. Although the chosen colours maintain a relatively sober tone, the original harmony of the whole has disappeared - especially the warm colours of the facades. The loss of the grid composition of the panels, covered by the thermal insulation, does not benefit the G models. 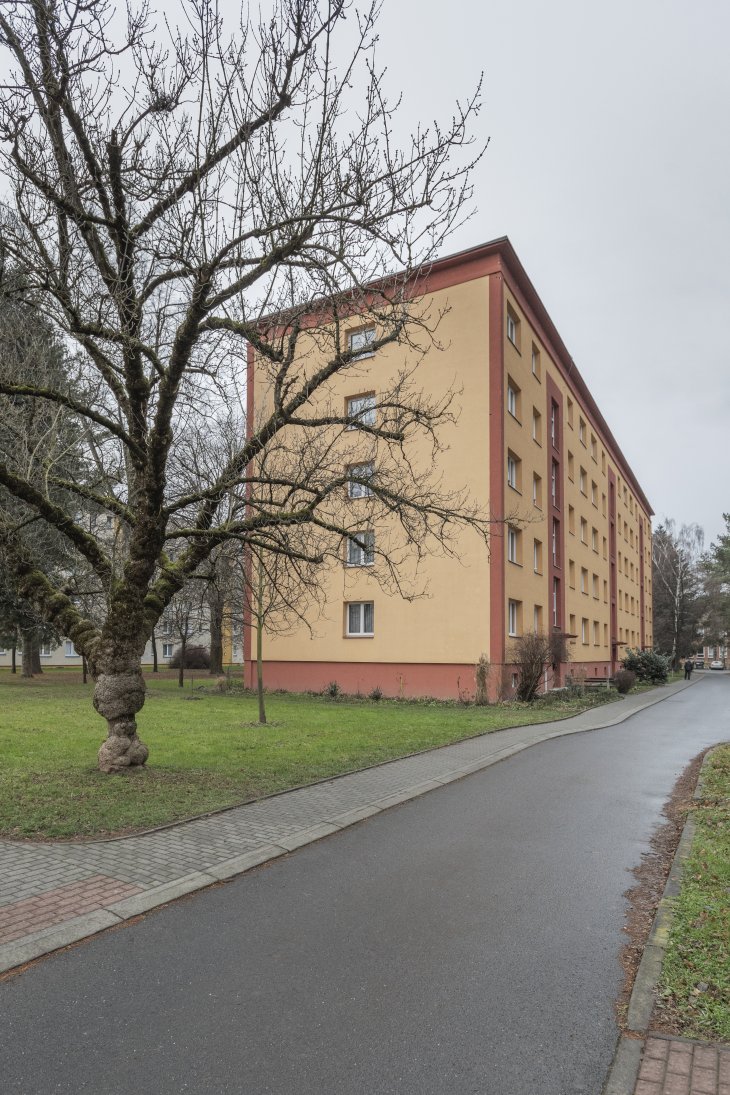 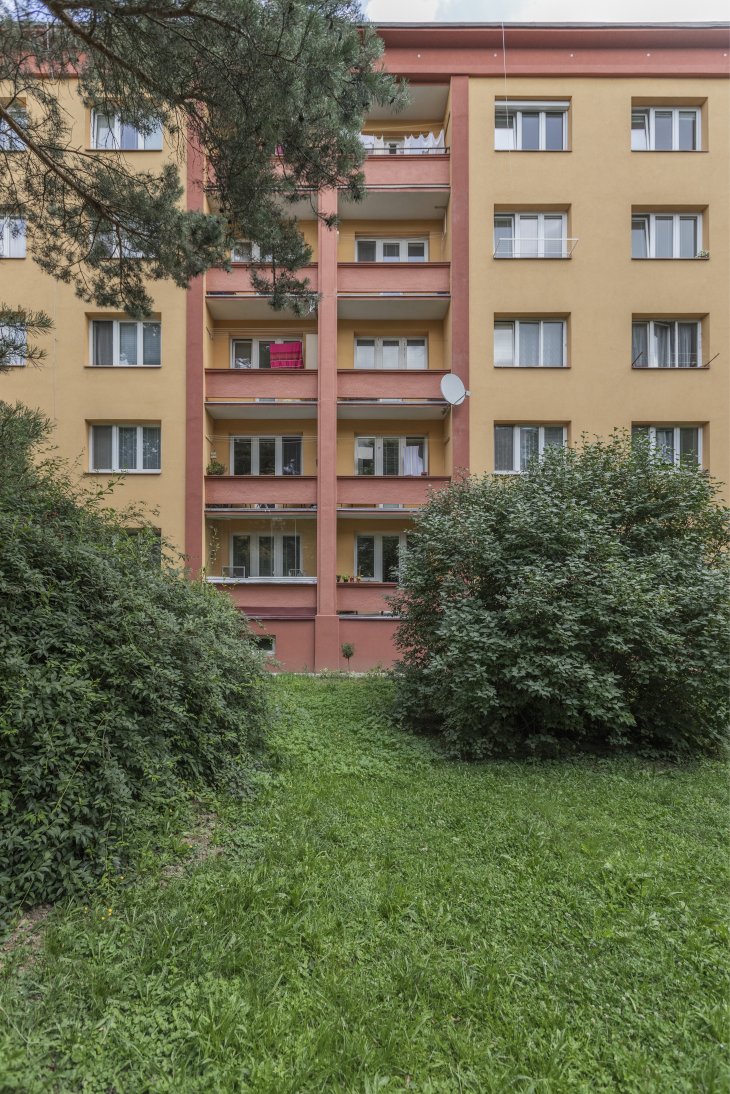 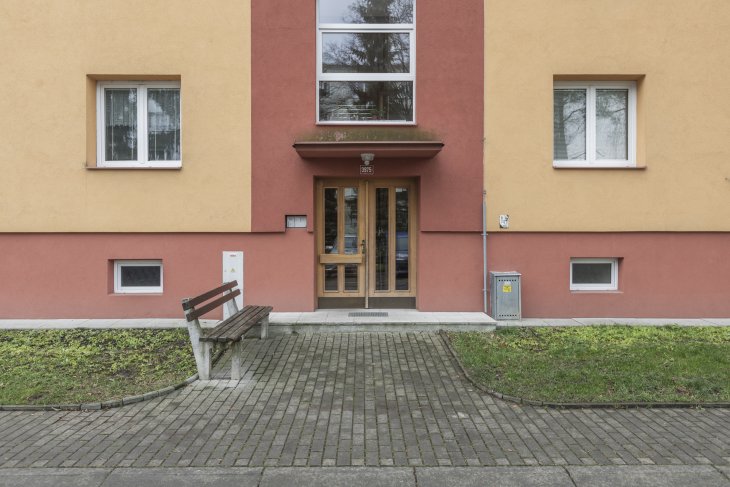 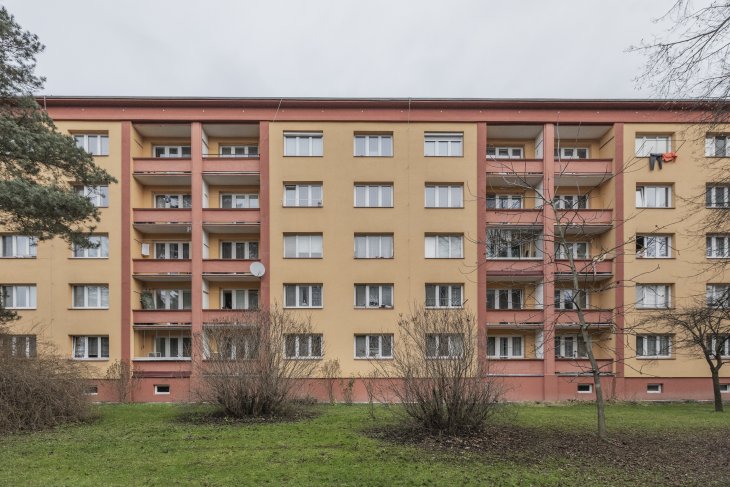 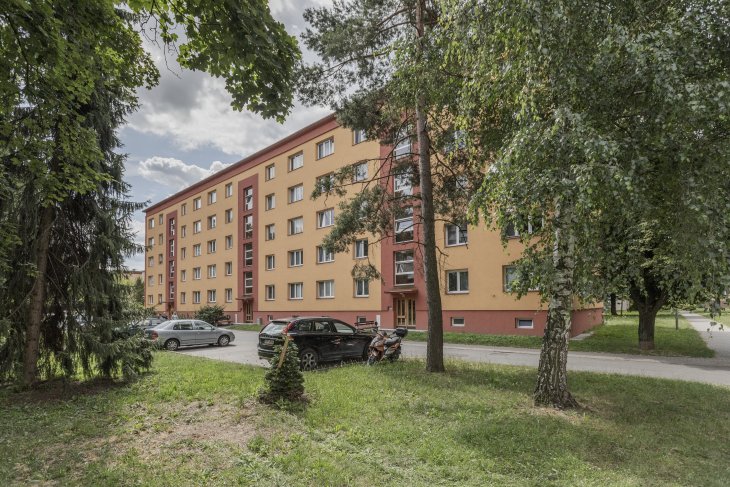