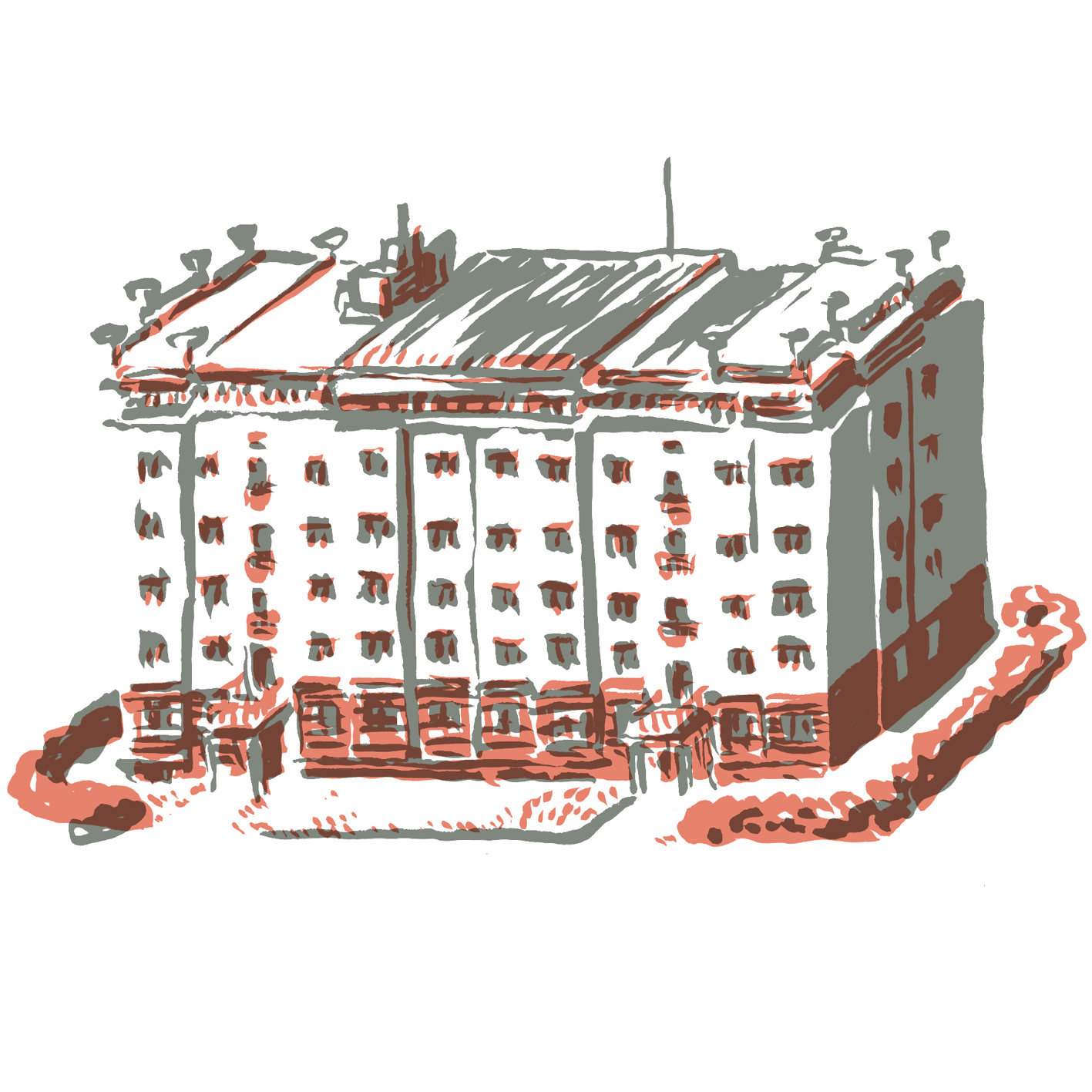 The first prefabricated house made of structural prefabricated panels in the former Czechoslovakia was built in Zlín (then Gottwaldov) at the turn of 1953 and 1954 and was given the designation G40 (G according to the place of origin, ie Gottwaldov, and number 40 according to the number of apartments). The architects Bohumír Kula and Hynek Adamec were experienced innovators in the field of apartment building construction, and they had previously carried out a number of experimental buildings, first for the Baťa company and later within the Institute of Prefabricated Constructions of the nationalised Stavosvit company.

In the pre-war and war period, their experiments were relatively unique, but after 1948, the already nationalised former Construction Department of the Baťa company was not the only place where new types of residential construction were born. The socialist state realised that it was necessary to build hundreds of thousands of new dwellings, especially in rapidly developing industrial regions, and they also realised that it was not possible to satisfy this demand for dwellings with conventional brick construction.

In parallel with the Zlín engineers, many others had also been developing experimental types of housing, but it was Kula and Adamec who, thanks to their previous experience, managed to design a type of house that became a symbol of post-war housing construction - a "panelák".

The construction of a prototype of the G40 prefabricated house began on Nábřeží pionýrů (now Benešovo nábřeží) on a vacant plot of land between the railway line and the Dřevnice river in December 1953. After the site equipment was secured, the engineering networks laid a pit, dug for the basement of a house 46 m long and 14.4 m wide.

The basement was poured as a monolith into the wooden formwork, but the ground floor was already assembled from panels carried by trucks from the factory in Malenovice. Gradually, a total of 1523 prefabricated parts weighing 2400 kg were transported over a distance of 8 km. The prefabricated products were moved from the cars to a storage site, and the gantry cranes then lifted them and installed them at their precise places. At that time, the cranes were still constructed individually as welded structures, which were also drawn and assembled by employees of the Institute of Prefabricated Buildings.

The workers gradually secured the panels in given order, connecting them to each other by welding metal nooses, and subsequently filling the vertical chinks with mortar. These were then covered by vertical profiled columns, which are still one of the typical features of G40 house facades. After 10 weeks of work, the assembly of the flat roof completed the rough construction in February 1954, and the finishing works lasted until May of the same year.

Each G40 house is a solitary building, unlike many later prefabricated houses, which could be assembled in any length. This is not possible with the G40, as the kitchen windows of the four apartments on each floor face north and south, being placed on the shorter sides of perimeter walls. The layout of the house is therefore only two-entrance, while both halves of the house are symmetrical along the central axis, so on all floors we find the same set of apartments.

This Zlín prototype is undoubtedly the most ornate house - it was completed before the critical appraisal of socialist realism, so the authors did not hesitate to use the legacy of classical architecture - the ground floor was distinguished from the higher ones by horizontal lines and separated by a cornice. These elements gave the impression of a kind of plinth of the house. Horizontal joints are covered with concrete parts shaped into pilasters.

Above the distinctive main ledge, we find decorative elements in a regular grid in the shape of flat goblets evoking the Renaissance fondness for decorating the gable with pinnacle-like ornamentation. Unique and no longer repeated elements on other G40 type houses are also the entrance porticos, whose flat roofs are used as balconies for the apartments on the second floor. Above the entrances we find mosaics - one depicts linden branches, the other recalls the year of construction, ie 1953.

Tenants could choose from 32 two-room and 8 three-room apartments with an area between 53 and 68 m2. The apartment was equipped with a bathroom with bathtub and sink, as well as a flush toilet. The kitchen, with a fitted gas stove, a pantry, a working table and two hanging cabinets, completely fulfilled the ideas of the time about a comfortable and technically satisfactory working environment for a housewife.

Soon after the completion of the Zlín prototype, comparisons with other residential houses appeared in the professional press, both with houses of an experimental nature and with the then common brick types. The G40 exhibited many favourable parameters, such as the reduced weight of the structure, and fewer hours of on-site work compared to conventional masonry types, but the results were not convincing enough for the G40 to dominate building production.

Such success was achieved by the people of Zlín only a few years later, when, apparently under pressure from the resolution of the Central Committee of the Communist Party on the construction of 1,200,000 flats by 1970, panel construction of type G was preferred to other types of structures and mainly in the form of the G57 type dominated throughout the 1960s in all newly built housing estates.

After the prototype on Nábřeží pionýrů, the G40 type was tested in series at the Herálecká housing estate in Prague in 1954–1955 and then built en masse throughout the country. However, Zlín's first "panelák" surpassed its subsequent copies in many successful details, because it managed to emerge before Khrushchev's critique of socialist realism. The younger G40 houses built after 1955 already lack columns to highlight the entrance, painted facades, decorative railings and decorative elements of the ledge.

By 1958, eleven of these houses were built in Zlín, and another four in nearby Otrokovice. In Hulín we would find two buildings of the G32 type, reduced by one floor compared to the G40.

The house on today's Benešovo nábřeží was insulated and renovated in the 1990s. Although the original grid of panels was hidden under the insulation, it is a relatively successful renovation trying to preserve the original color and appearance of the facades. 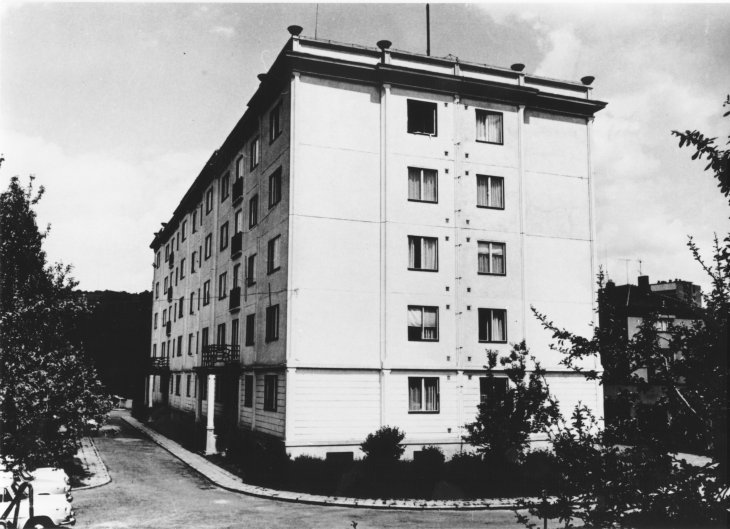 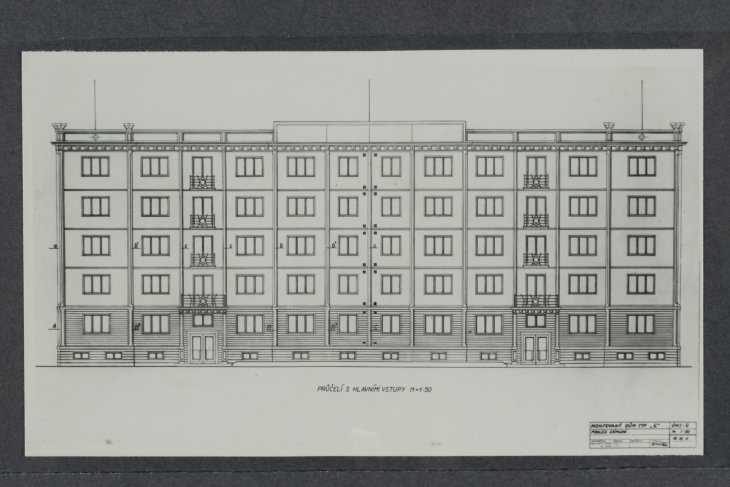 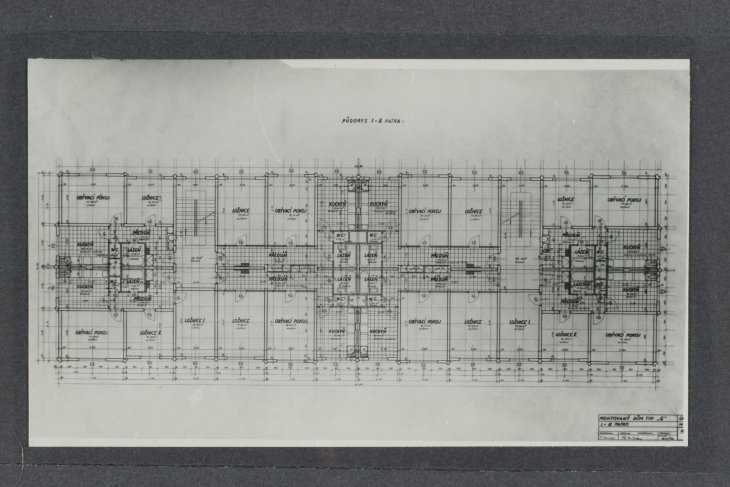 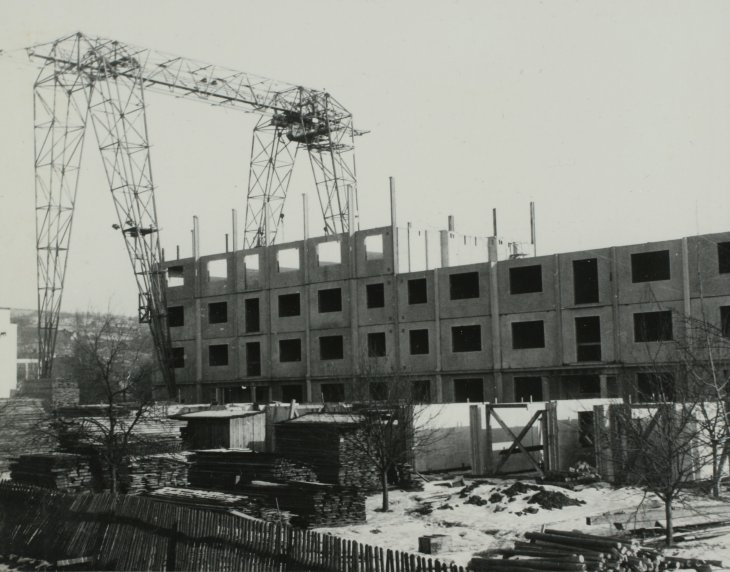 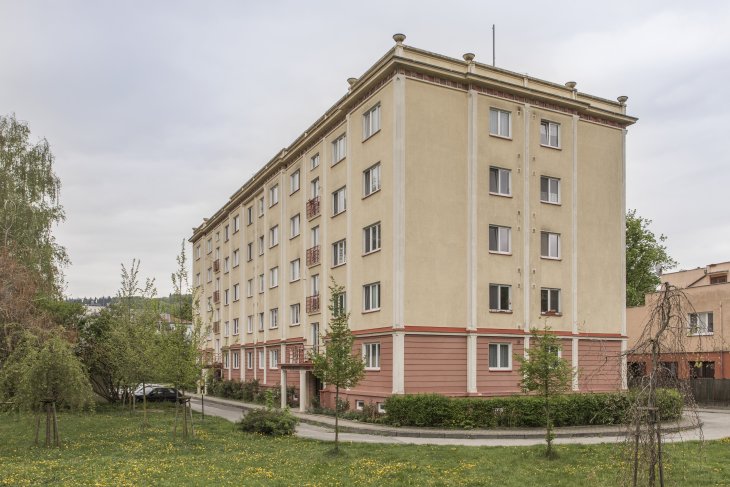 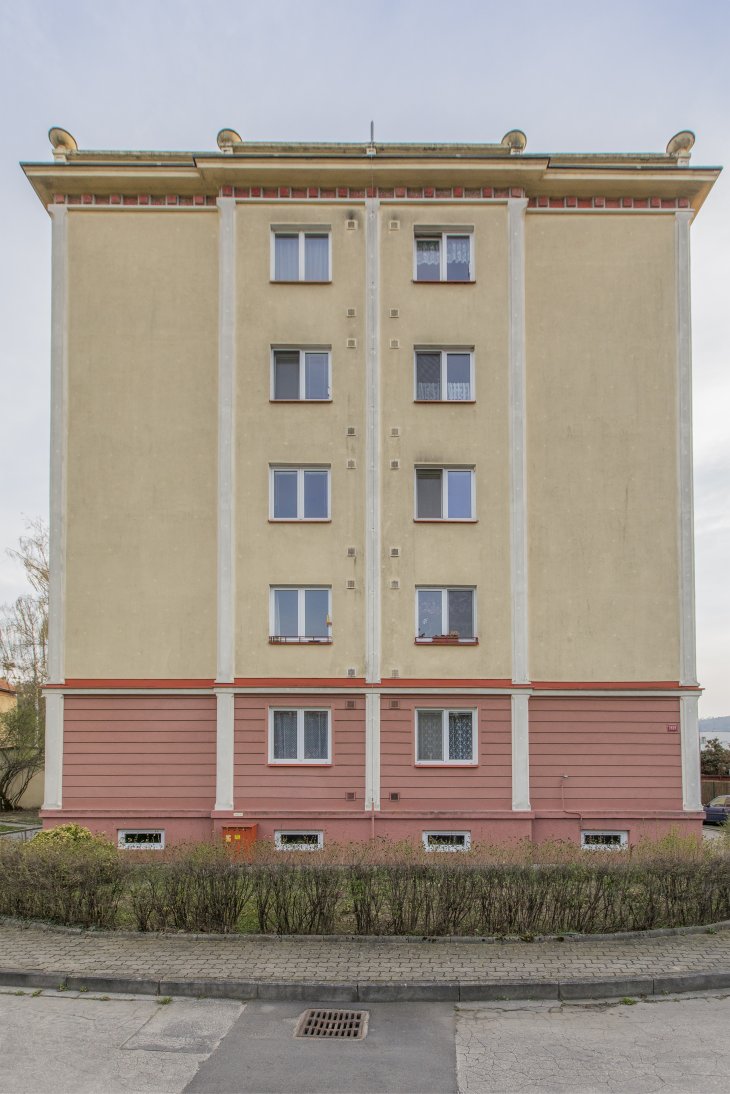 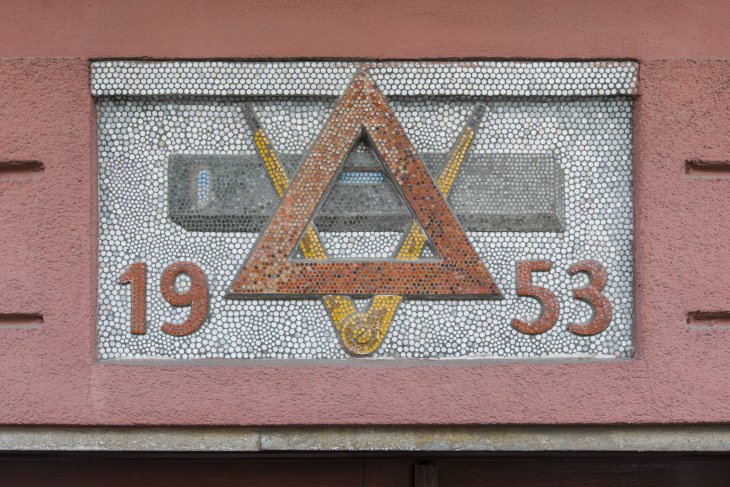 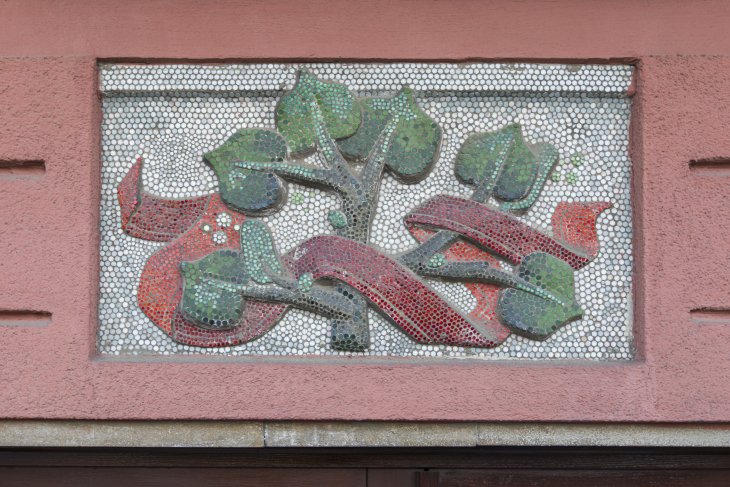 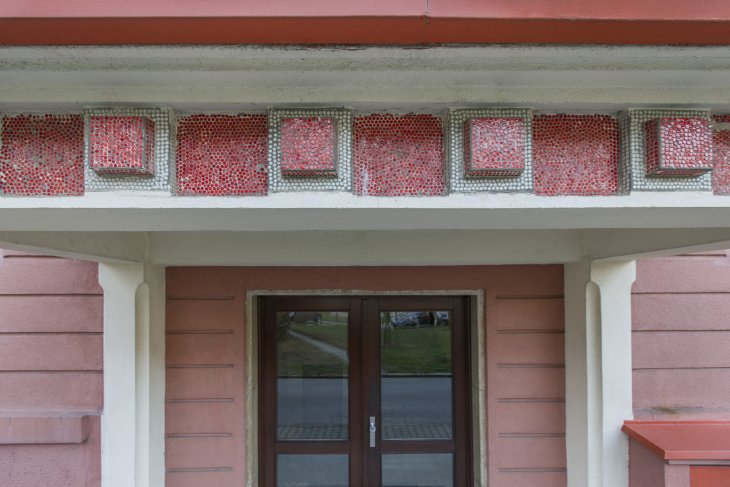 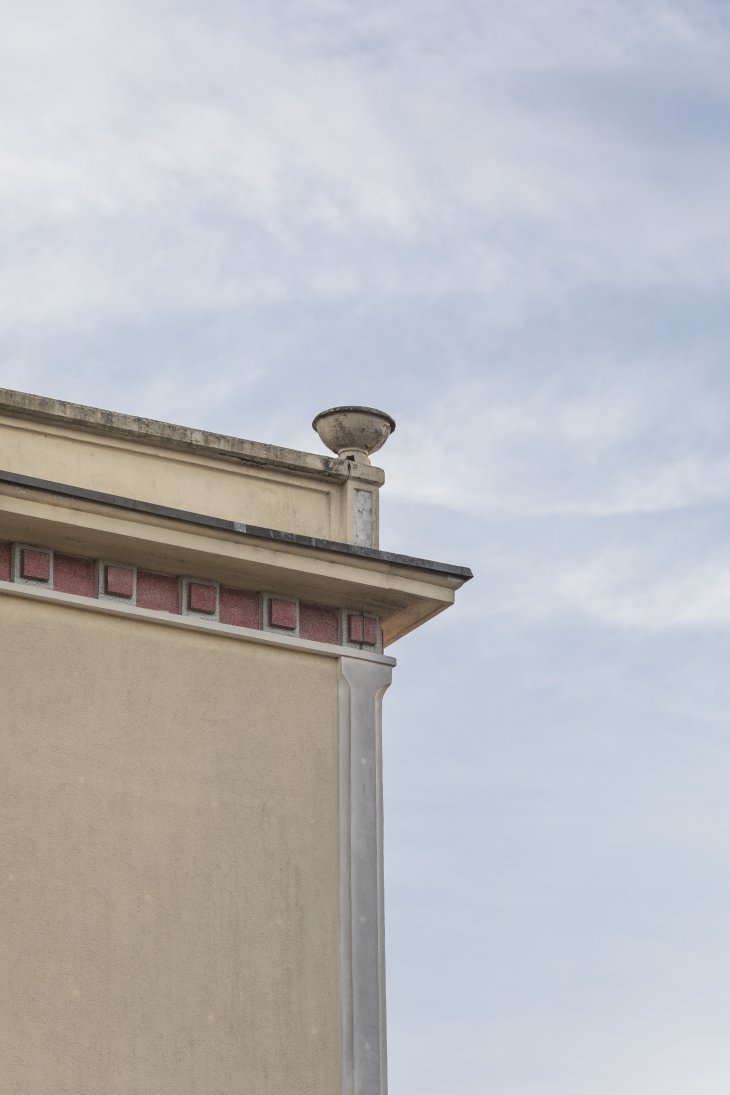