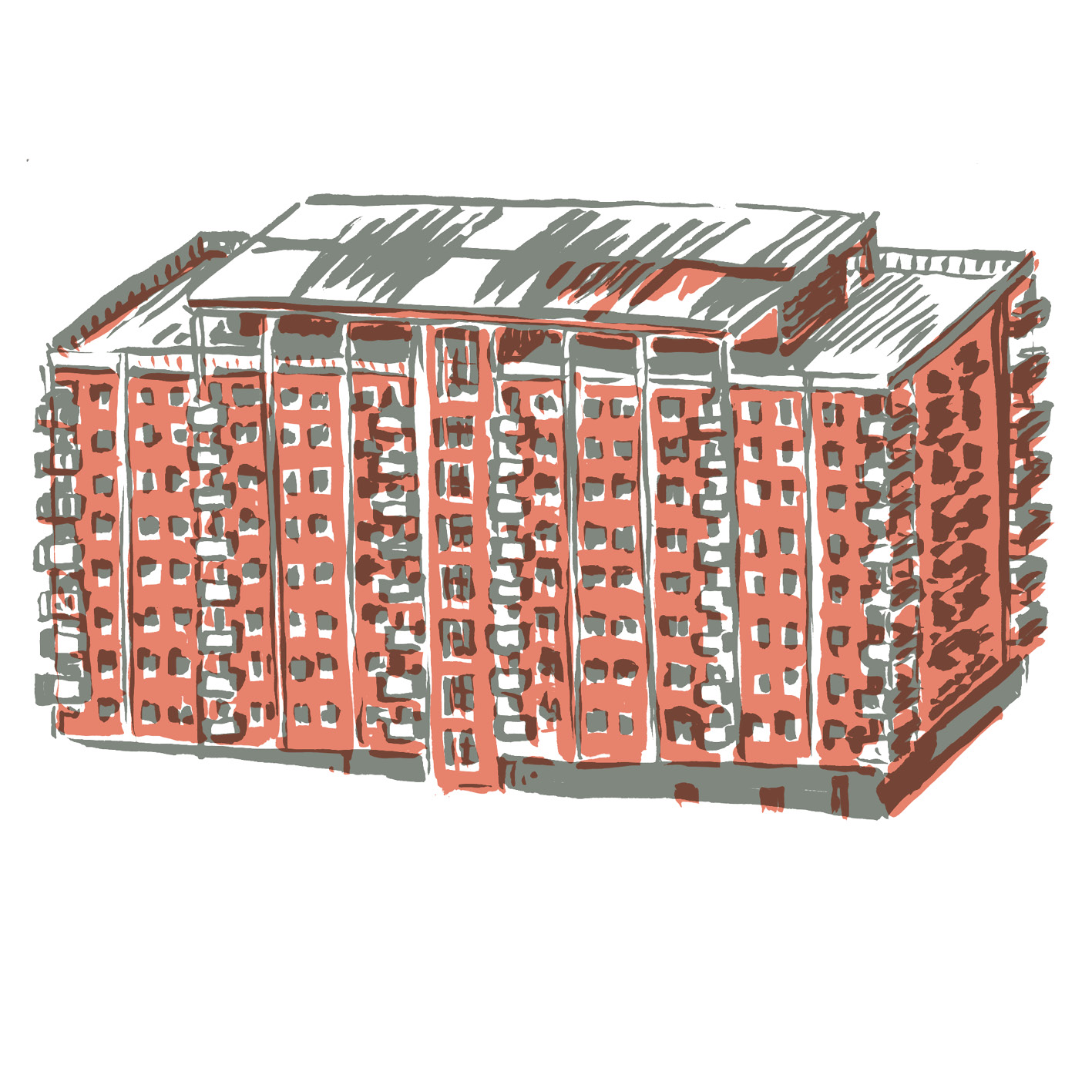 In the 1930s, Miroslav Drofa, as an architect employed in the Construction Department of the Baťa company, had long been involved in the design of standard variants of family houses, which the company offered to married employees. After experiments with prefabricated panel houses during the war period, shortly after its end in 1946 he returned to the previously popular fourplexes, now adapted for the Podvesná residential area. However, one of his most important and interesting realisations are the multi-storey houses referred to as Apartment corridor houses, or the Morýs houses. This locally used name refers to Vilém Morýs, the first post-war mayor of Zlín, who tragically died in a car accident in 1948.

The houses are situated as a new visual hallmark of the eastern part of the city together with five eight-storey tower houses along the Tomáš Baťa thoroughfare (then Stalin's main road). The area was delineated by the city's master plan from 1946–1947, which was designed by a team of architects led by Jiří Voženílek. The multi-storey houses perfectly represent the period just after 1945, in which the forms of accommodation in the industrial environment of Zlín gradually expanded. This largely natural development was supported by the events of the war - the destruction of the housing by bombing, a sharp reduction in construction and the change in the political climate after the end of the world war. In an effort to economise the undeveloped urban space and the financial demands of the implementation, the transition was made from family houses in garden districts to purely urban high-rise buildings, which were no longer reserved only for the mass accommodation of the youngest workers.

Architect Miroslav Drofa, like some other authors of other post-war residential districts in Czechoslovakia (Labská Kotlina in Hradec Králové, Bělský les in Ostrava, Prague Solidarity), used functionalist expressive elements, construction principles, and linear organisation of buildings to create a contemporary housing of excellent quality. At the same time, thanks to his study trip to Sweden, he was influenced by contemporary Scandinavian architecture, which combined avant-garde forms with traditional details and benefited from the harmonious relationships between materials such as wood and brick and the complementary natural framework.

Unlike the nearby tower houses, which are characterised by load-bearing brick structures, both identical apartment houses are supported by a reinforced concrete skeleton with round columns left visible on the face brick facades. In addition, the columns rise monumentally throughout the height of the building. In the corner sections, they impressively intersect the balconies, thus supporting, together with the strips of stair windows, the significant verticality of the houses. During this period, the use of prefabricated concrete railings of balconies is typical in Zlín, which creates generous loggias running over the corner of the end apartments. These elements contrast nicely with the smoothness of the facades. The mass of the blocks was somewhat diminished by open roof terraces freely accessible to residents for relaxation.

Drofa designed the apartment houses in standard layout with a relatively narrow middle corridor and apartments on both sides, facing east and west. Sixty two-room flats for families with a smaller child, thirty three-room units for large families and seven small flats for childless couples formed a generous home for every resident. The apartments were furnished with modern built-in furniture in dressing rooms, halls, and kitchens. However, the elements of collective and community services were what made them deviate from the typology of multi-storey rental housing. The residents and partly also the public were served by the premises on the ground floor of both buildings, where, for example, a kindergarten, a nursery, shared laundries, a dining room, and a restaurant were available. Miroslav Drofa started the line here, which culminated in the Collective House by architect Jiří Voženílek

Miroslav Drofa's original design from 1947 is clearly recognizable in the current state of the apartment houses - their architectural form has been preserved. To this day, the contrast of a large area of ​​face brick masonry with the light coloured elements of the supporting reinforced concrete structure and window lintels shines from the distance. The houses did not undergo insulation of the exterior facades, but still were not completely protected from a number of modern interventions. Over the decades, the function and layout of the ground floors with additional, originally collective services has changed several times. They currently have fewer services. The recreational terrace with common rooms was already filled with additional flats in the 1960s. A large part of the original wooden casement windows were replaced, and the concrete railings of the balconies and roof terraces were replaced by metal ones. Nevertheless, the houses still have a number of original elements, especially in the interiors - stair railings, chrome-plated mailboxes combined with wood or travertine as well as wooden floors or built-in cream-coloured furniture inside some apartments. 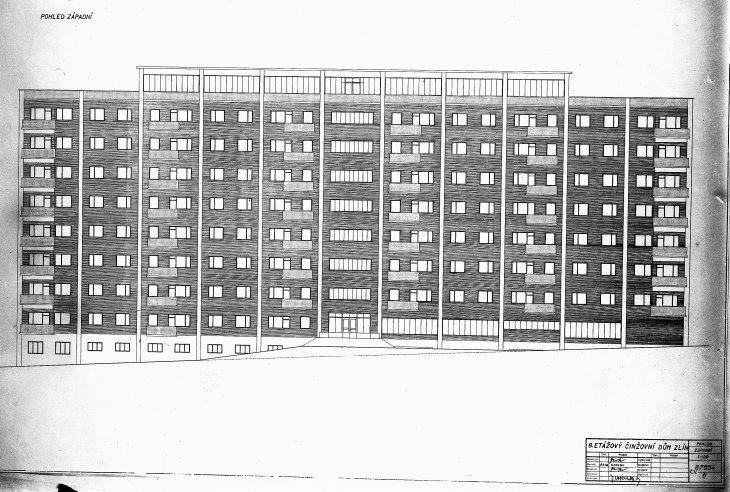 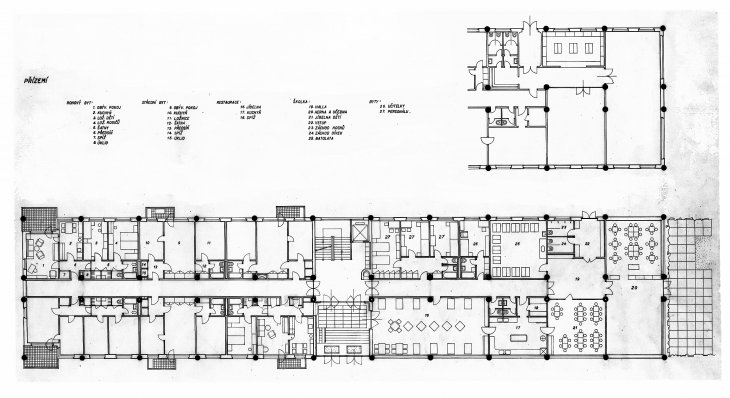 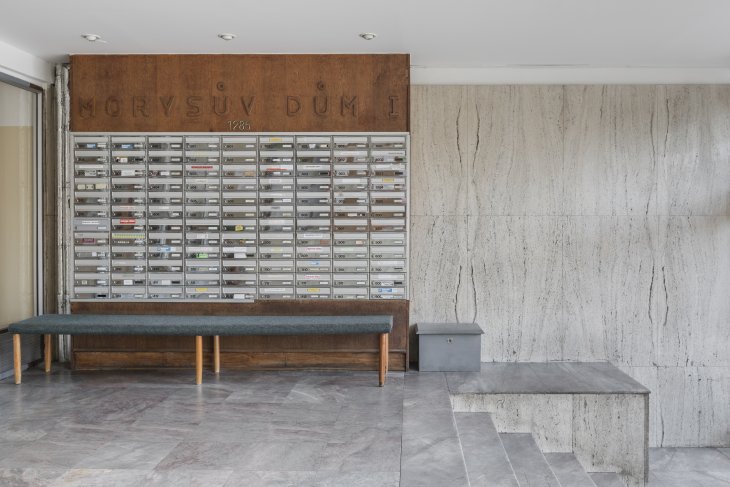 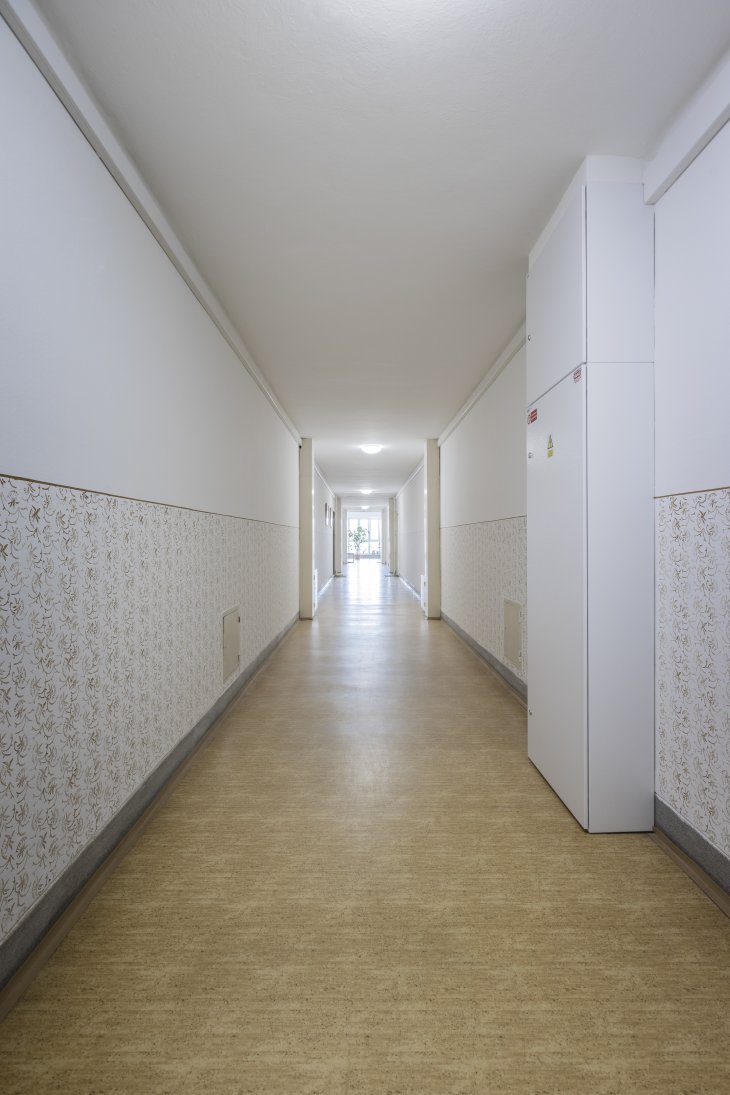 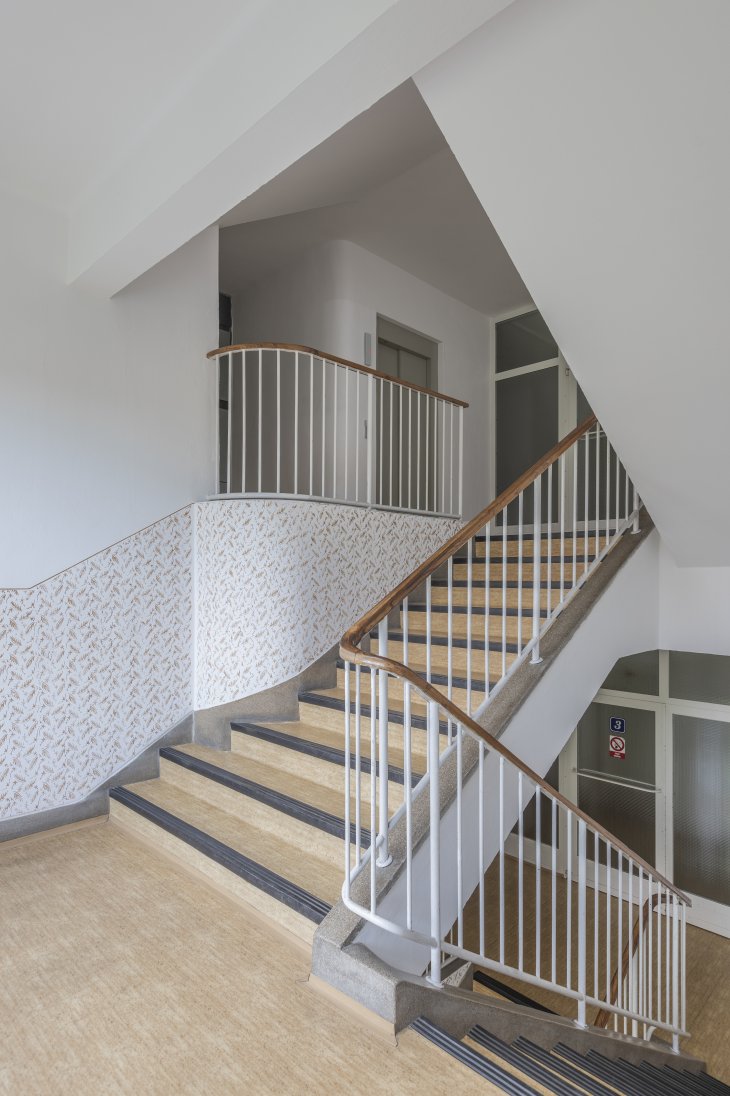 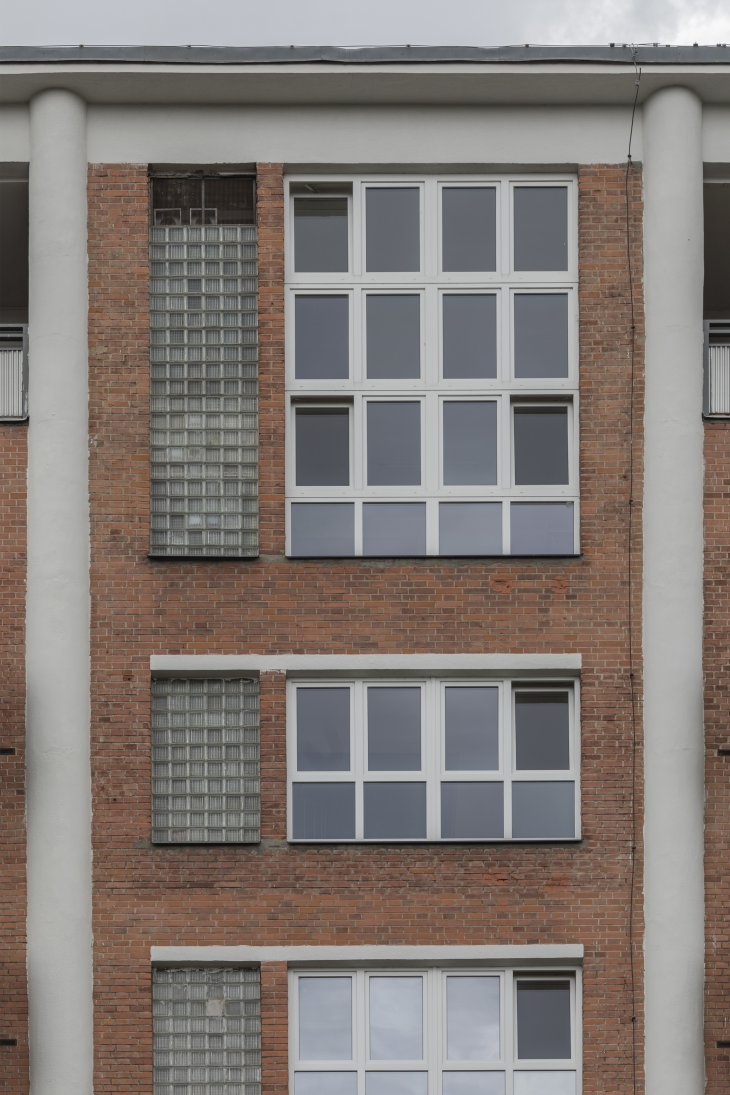 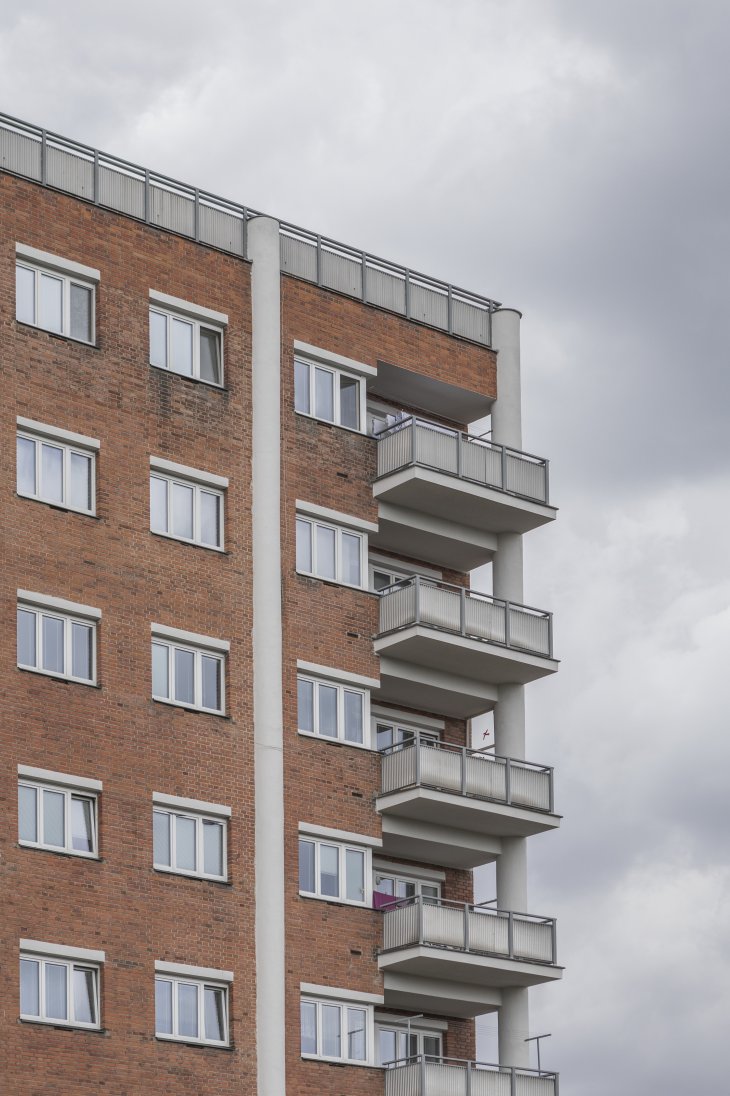 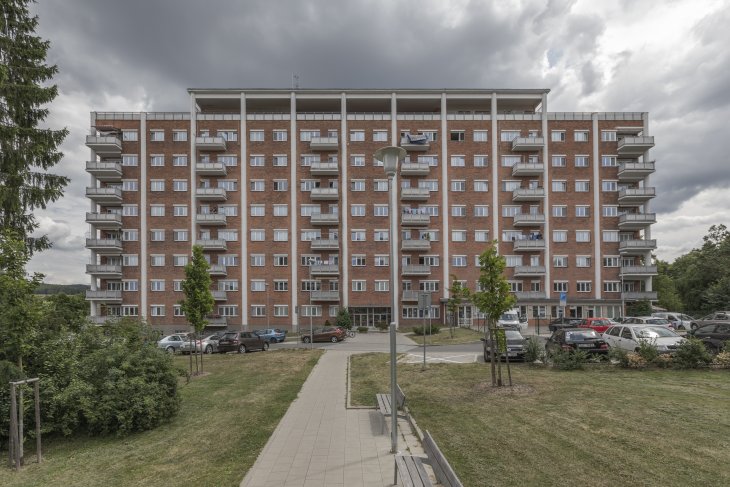 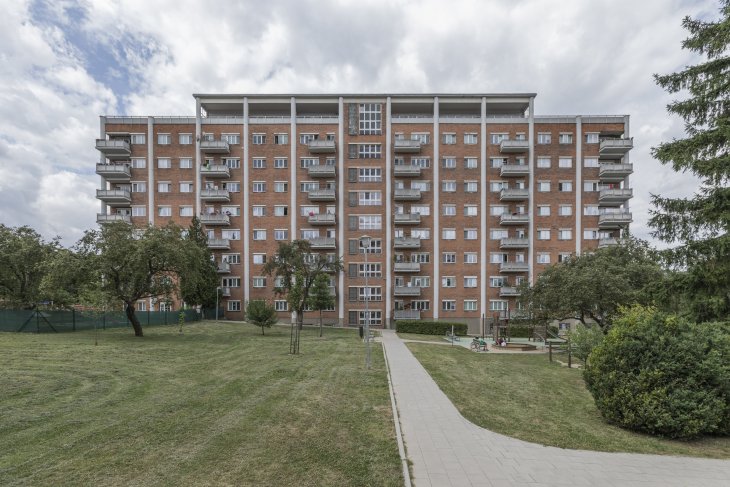 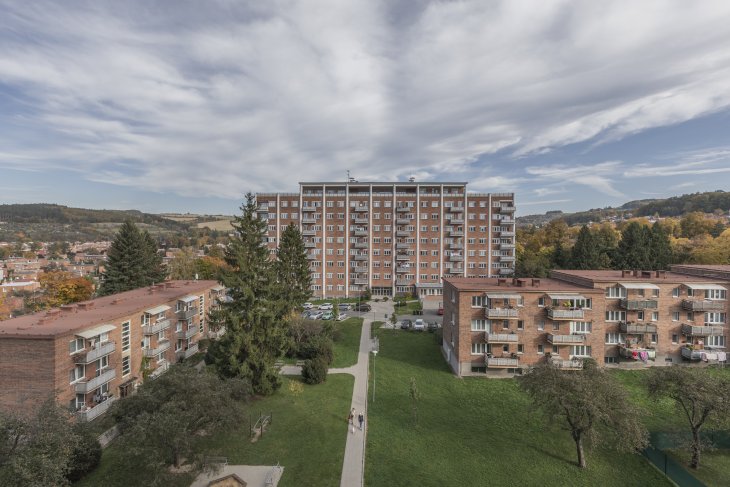