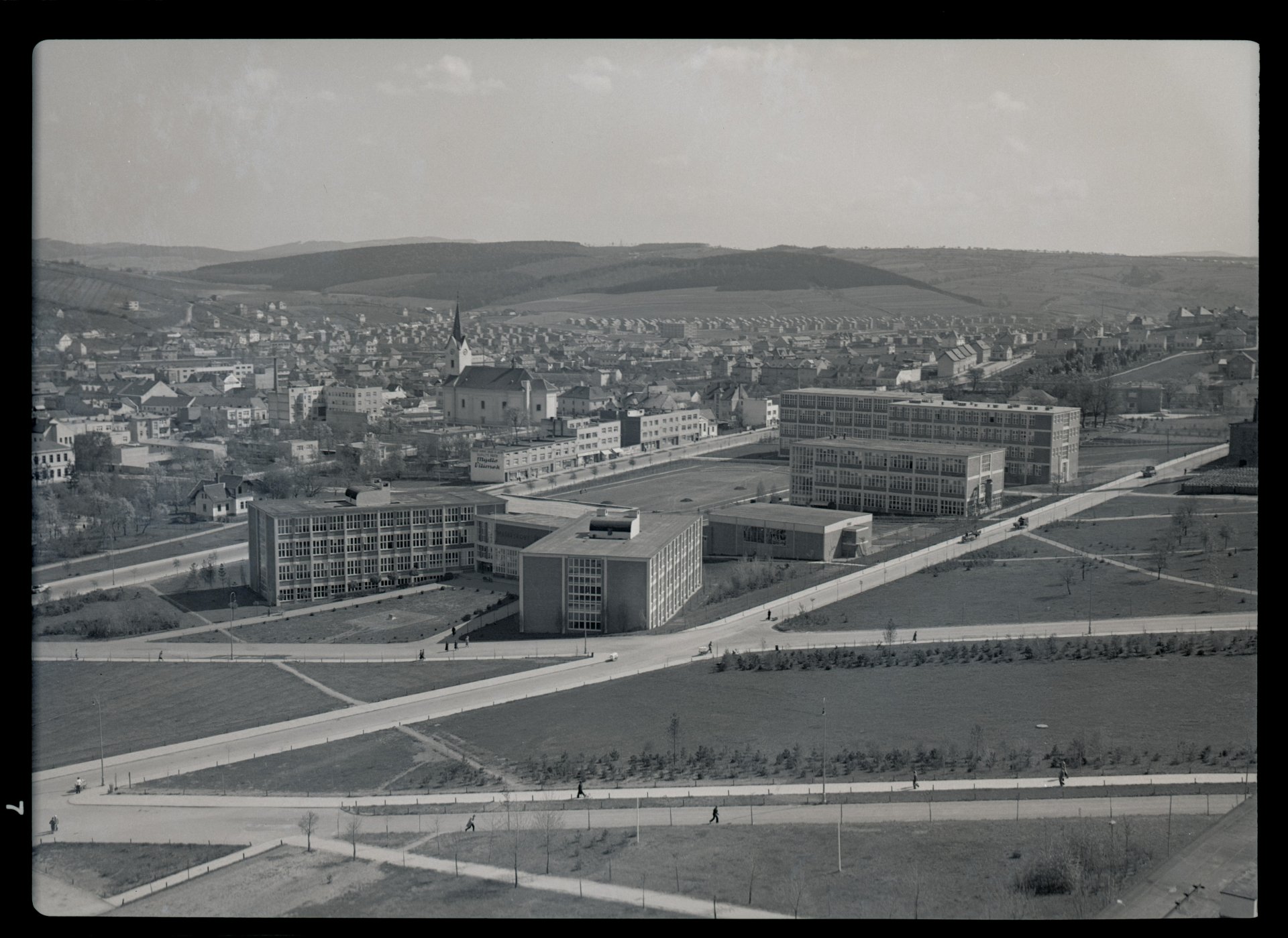 The complex of Masaryk's School buildings, now no longer existing, were designed by architect FrantišekLýdieGahura. Apart from the usual school children, apprentices from the Baťa Company studied there in the evenings and on Saturdays. As the numbers of youth employed increased in the 1930s, the school's capacity was at the edge of sustainability.
After moving part of the teaching of young men to factory buildings No. 2 and 3, mostly young women went to Masaryk's schools. Girls aged 14 to 18 years went through a more universal education than boys, because the company did not expect them to have a long career. In the company they performed only specialised tasks resembling housework. They found employment in the manufacture of leather and rubber footwear (sewing, textile processing), in the production of stockings and tricot goods, in the manufacture of gas masks (relief work, cutting work), etc. Those with good results could start training for lower and middle administration (typists, secretaries, payroll accountants, telephonists). Their teaching was further complemented by courses in homework, family education, housing culture and aesthetics, which were to become invaluable in the next phase of their lives.
The focus of their education corresponded with the Baťa social norms applied to the position of women in the company production process, and the social sphere it was based on generally shared bourgeois ideas of an ideal family. Young, underage girls were employed in group factories and educated in three-year apprenticeships. Practically orientated education serving the immediate needs of the group was preferred, or education that fully corresponded to the Baťa demandsof the social role of women after they ceased working for the company (training for various household work, family economics, health and parental education, aesthetics).
Since it was anticipated that after the wedding, women would stay in the household, where they would support their busy husbands and become educators of the next generation of the company's employees, they did not take vocational subjects. Such an investment was considered to be wasteful in terms of time and money. Given the perception of gender roles, married women rarely received job opportunities within the company. It was thought that they would leave the company during pregnancy at the very latest.
These gender ideas correspond to the surviving statistics. For example, in 1940, women under 18 represented 29.6% of the female workforce in shoe workshops and an unbelievable 48.3% in rubber processing. The category of 18-21 years made up another 38.9%, or 32.6% of all female forces. On the contrary, the representation of women over 31 years was negligible, representing 6.3% in shoe workshops and only 1.4% in rubber workshops. (Source: Moravian Provincial Archives in Brno, State District Archives in Zlín, coll. Baťa a. s.,Zlín, sign. I / 3, cart. 52, inv. no. 186.)
The daily assessment of young men and young women also regarded their appearance. In order to strengthen the identity of boarding school inmates, a uniform was introduced: there were several variations of girls' uniforms (most often a dark blue costume with skirt and white blouse), men wore a blue suit with a blue cap with a flap. Each year could be differentiated according to the insignia on the sleeves.
Uniform was popular among Baťa youth. As MadlaVaculíková recalled her adolescence at the Baťa School, “some of the girls went to Baťa because of the costumes. Because they were different. And when they showed up at home in the village, they reaped admiration. Baťa had credit. There was a desire to belong to an exclusive group of people… ” (Madla VACULÍKOVÁ, Jájsemoves (I am an Oat): an interview with PavelKosatík, Prague 2002, p. 22)
Originally, the students of the boarding schools wore uniforms only on festive occasions; After 1938, however, the wearing of the uniform became - at least in the case of young men - part of the mandatory everyday out-of-factory accessories. By placing one's hand on the cap flap, a military salute was introduced.
Following the introduction of ration books for clothes in the war economy, the mandatory wearing of uniforms had to be abandoned. The component of young people who could not identify themselves with Baťa's values welcomed it. "But you know, because I was in opposition, I didn't buy the uniform," MadlaVaculíkova said. “They could not force me to wear the costume. There wasn’t enough fabric even for cloth shoes.” (Madla VACULÍKOVÁ, I Am an Oat: an interview with PavelKosatík, Prague 2002, p. 21, 22). The identifying feature then became the badge that Baťa's students had to wear visibly on the flaps of civilian clothes. Perfect grooming was a matter of course. Every morning, the tutors checked whether their students had aligned seams on their stockings or creases on their trousers, and that their shoes were polished. 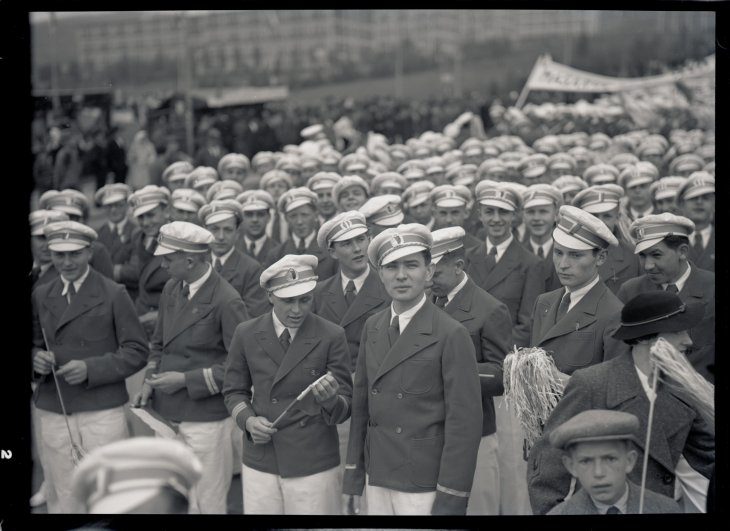 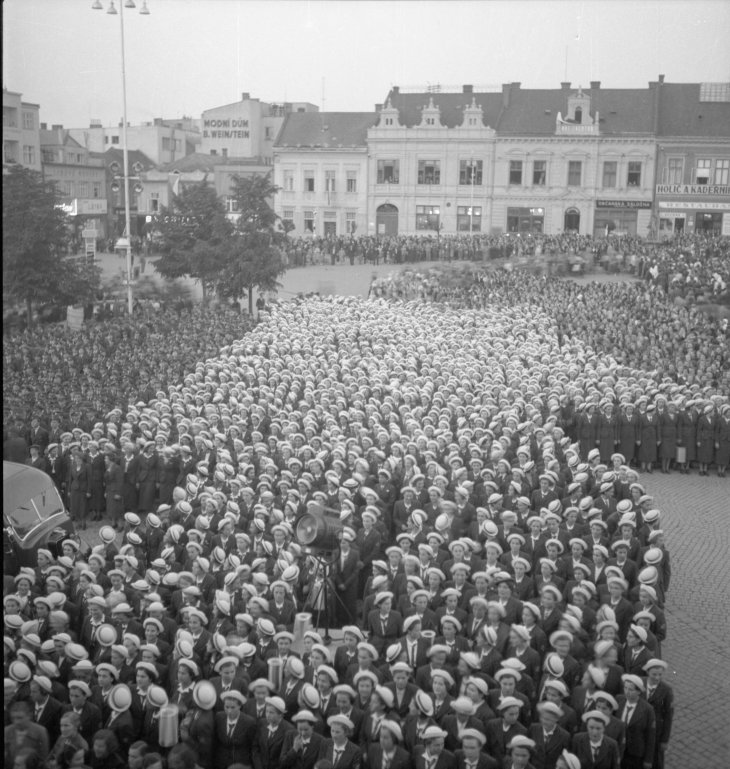 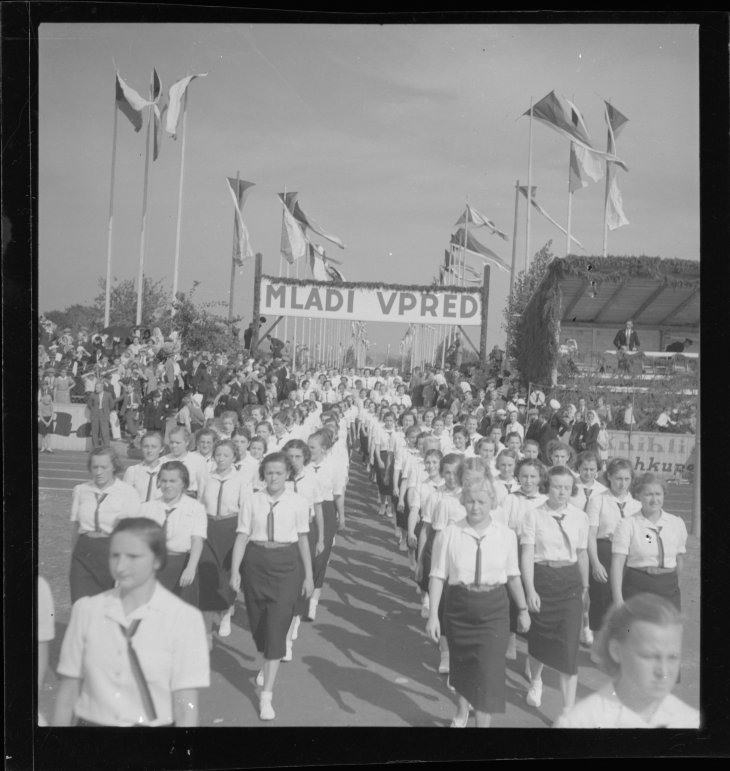 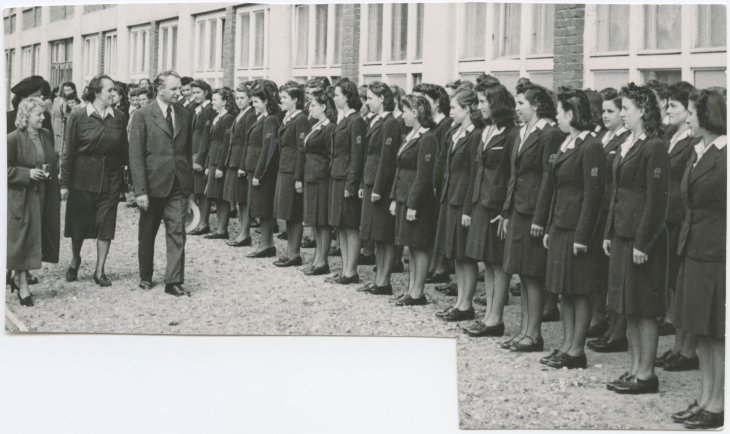 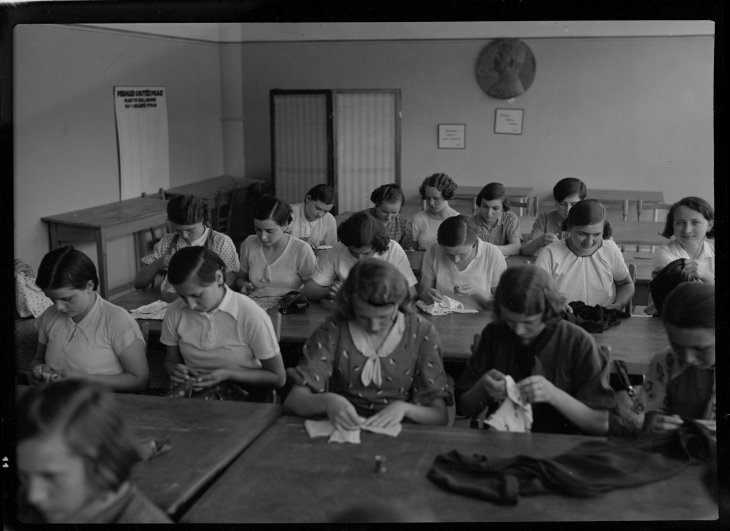