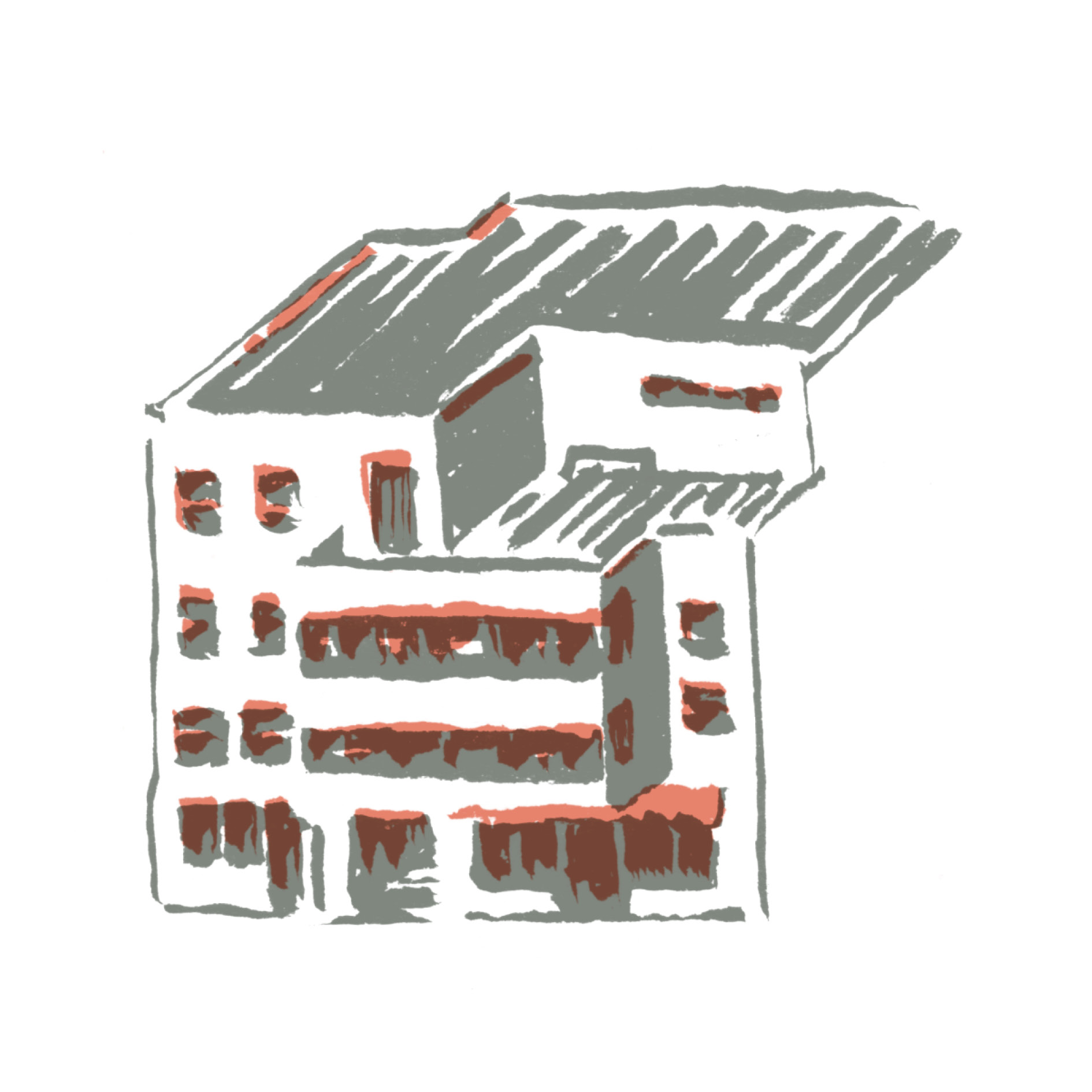 The establishment of a butcher's concession for the inhabitant of house number 9 Karel Mikšík dates back to 1899. The butcher's companion Eduard Červinka, whose name is now automatically connected to the building on the edge of the western front of náměstí Míru, continued this activity. On a historic plot in the city centre, there was originally a simple one-storey house with a shingle roof, where two families lived. In 1921, Červinka received permission to set up a meat processing workshop with an electric motor drive. A year later he added a shop window to the house and in 1927 he expanded the retail space with another room. A record of the poor condition of the building is also preserved from the same year, with a recommendation that it be either demolished or completely rebuilt in the foreseeable future. Therefore, in June 1931, the prosperous entrepreneur Červinka submitted plans for the construction of a new commercial and residential building designed by the Brno architect Bohumír Čermák in a progressive functionalist style. The construction company of Josef Jarcovjak was behind the implementation.
Nothing is known about the reasons that led the entrepreneur Červinka to appoint an architect from Brno. At the beginning of the 1930s, Bohumír Čermák was already an experienced architect with his own design office, in which, among other things, he also dealt with interiors and art objects. Cooperation with Brno architects was not frequent in Zlín, but we can also find other examples of it, such as the house of Bernard Weinstein on Dlouhá Street, the author of which is the Jewish architect Max Tintner.
The commercial and apartment building of the Meat Manufacturer Eduard Červinka was designed as a three-storey building with an attic. The irregular shape of the plot, which was to serve a dual purpose, also determined the appearance of the house with a wing receding into the courtyard. The building has a basement underneath a part of the house, where there are four rooms with central heating and a room for fuel storage. On the ground floor there are two business units, which are separated by a passage to the yard. The main commercial space of the meat processing workshop and butchery has a generous floor to ceiling height of 3.55 m. In the interior, which was also designed by architect Bohumír Čermák, in addition to the sales counter, there was also a section with tables, and a dining department. This retail part was followed by a wing with an office, a refrigerator, and a kitchen with a pantry and a corridor leading to the courtyard. From the office, a spiral staircase leads to the hall on the first floor. In addition to the commercial space, the second room next to the passage to the courtyard also has a storage space and a toilet.
On the first floor there was the apartment of the Červinka's family, consisting of a living hall, a bedroom, two rooms, and a bathroom. From the hall, there was also access to the terrace, where a garden was designed above the courtyard wing of the house. There were also two offices and a waiting room with a toilet on this floor. On the second floor we would find two apartments - a separate two-room apartment with a kitchen, bathroom and a small balcony facing the courtyard, and a three-room apartment with a hall and a small room for a maid. The attic of the house consists of facilities for one apartment with a kitchen and two separate rooms with a shared bathroom in the hallway. A laundry room and a drying room were also available on this top floor.
The facade of the house clearly reflects the style of the functionalist era and represents one of the most significant characteristics of Červinka's house. A bay window of iron construction with sash windows, which is lined with wood fibre cement boards, spans the first two floors. This creates an open balcony with a railing in the attic. The dwelling spaces above the commercial parterre is treated with a regular grid of sliding windows of American type. In Čermák's design, there were several advertising neons on the facade, which were to glow above the main entrance to the store and on the edge of the facade.
During the second half of the 20th century, the owner changed the space and the building began to be managed by the Pramen national enterprise. Gradually, the housing units were replaced by the background for shops, and the former workshop for smoking meat was used for the production of dumplings. Although the retail space still fulfils its original function, the rest of the house is transformed by numerous interventions. Even so, we can still find there a large number of preserved details such as the original balconies, stone tiles, and the division of the windows. The biggest disruption of the overall look today is the installation of advertising banners in the bay windows. This visual smog spoils the original generous style of the house, which was built during the heyday of Zlín by an architect outside of the Baťa company Construction Department. 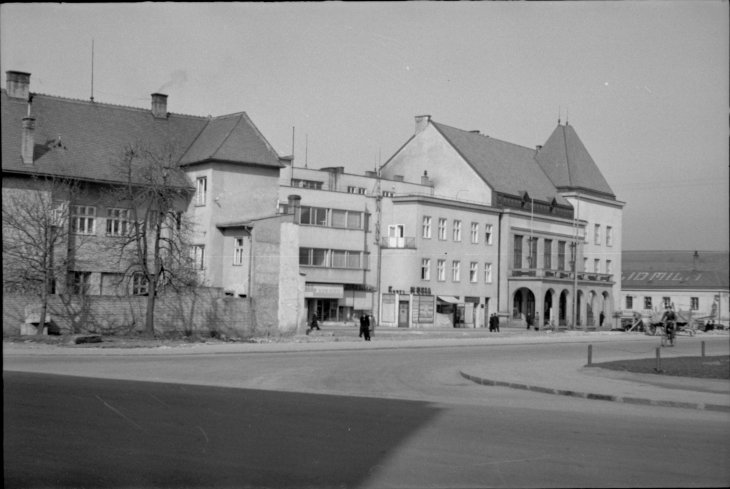 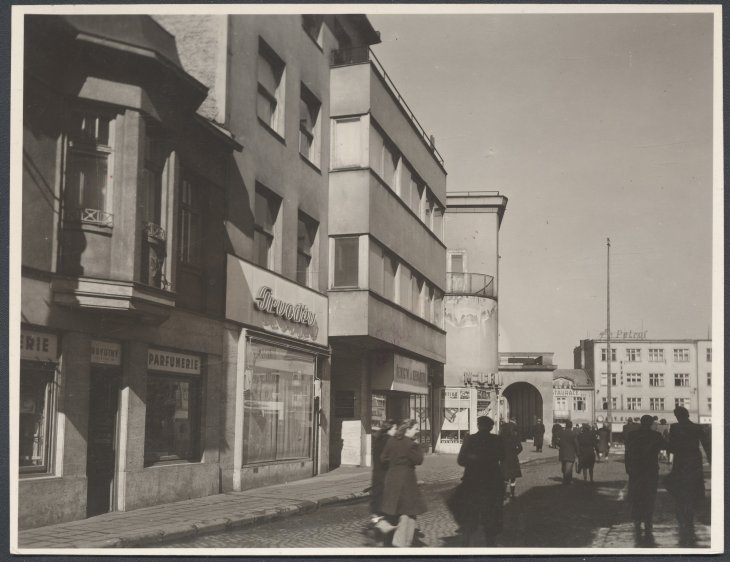 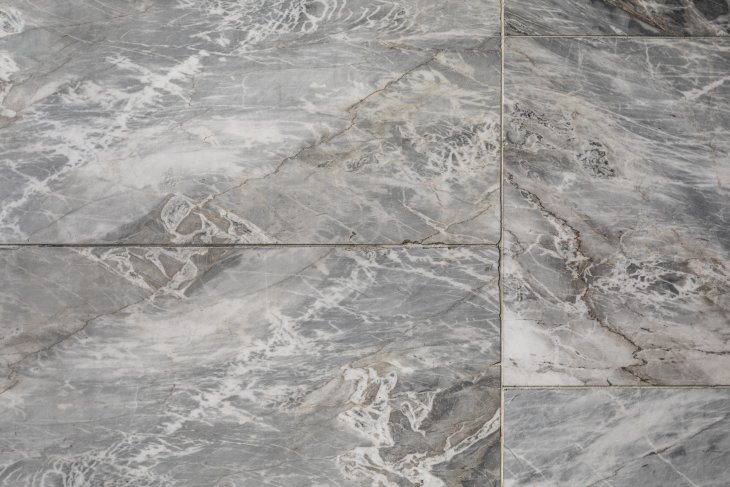 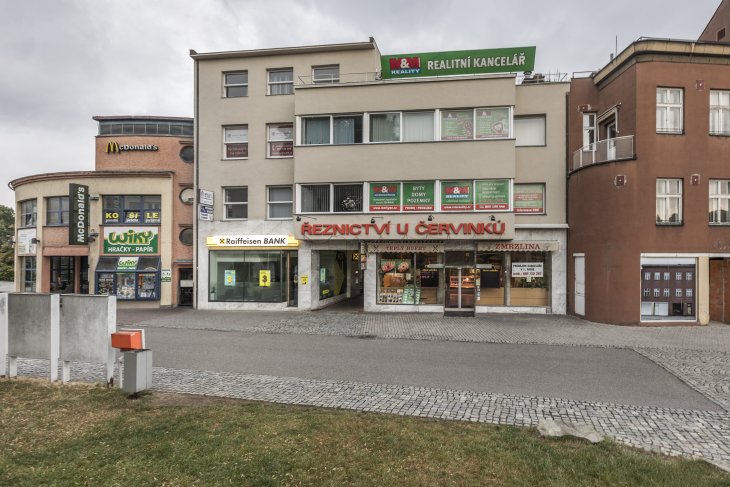 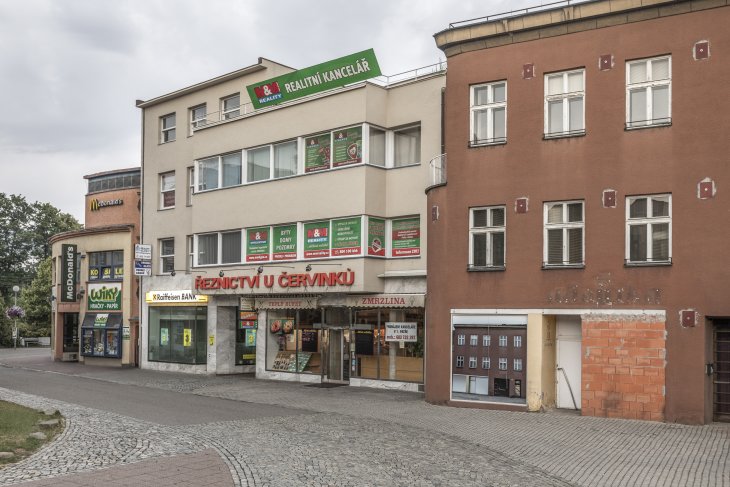