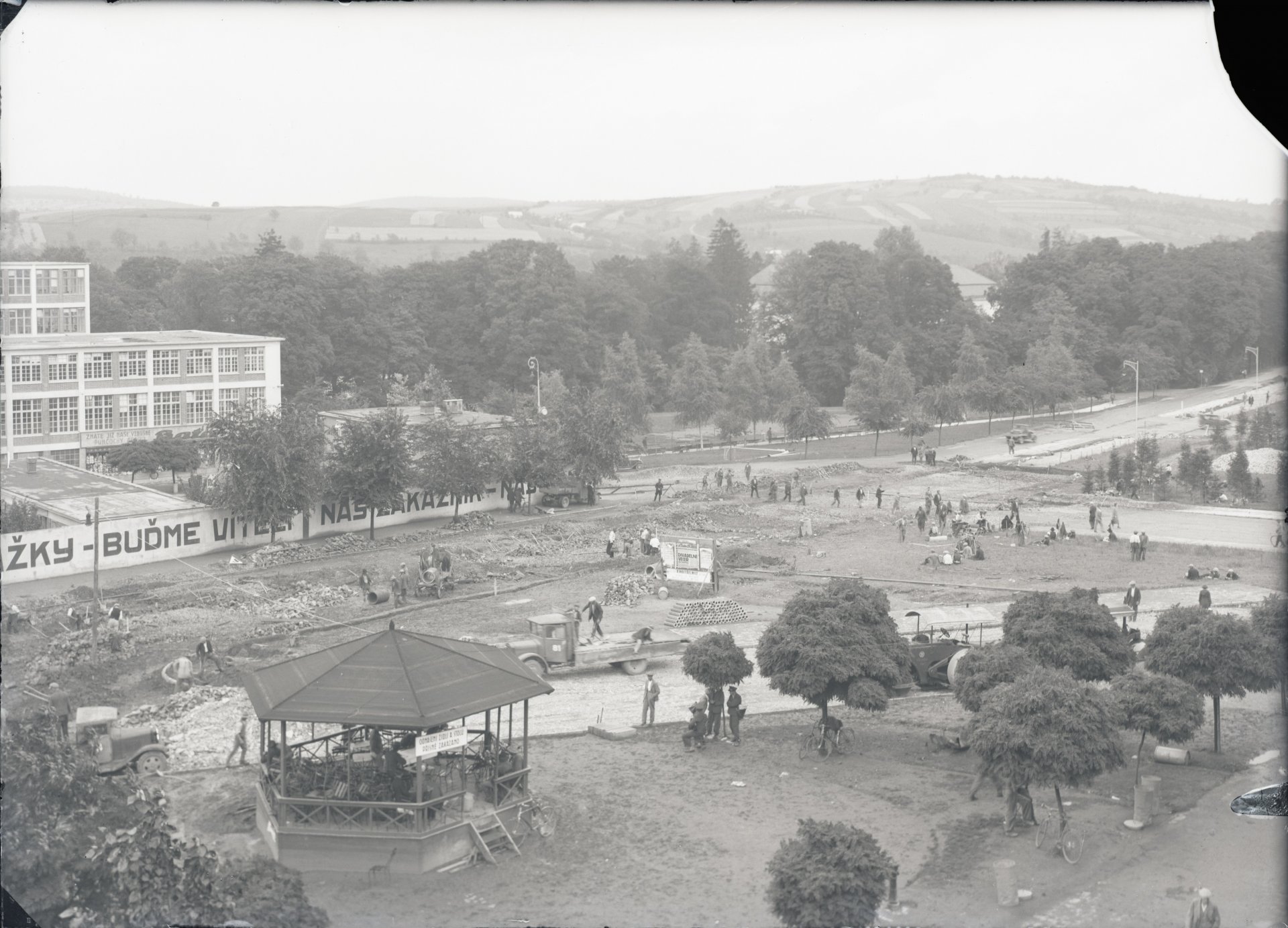 Náměstí Práce (Labour Square) - On the way to the workplace

The perception of young women and young men was influenced by the clash of the upcoming patterns of modern industrial society with the traditional agricultural background of the Podřevnicko region and the gradual, albeit revolutionary transformation of the small town into a regional centre and one of the country's most important economic hubs. It influenced their understanding of progress as something predetermined, superhuman, as a planned process leading from a backward past through a temporary and imperfect presence to the brilliant tomorrow of the future. The modern man believed in smooth and undisturbed technological, economic and social progress, and the enormous flood of symbols of perpetual process of building an industrial city only confirmed this attitude.
Even at the beginning of the 1920s, the area of the later Labour Square was just an ordinary cultivated field. The first apprentices walked from the newly constructed dormitories to the factory site, literally through a construction site, the edges of which were lined with fields, forests, and brickwork with aluminium, an industrial spur and dwellings similar to the rural rather than urban character of the built environment. In the following decade, the square underwent a major transformation. Gradually, the company realised commercial buildings – the Market Hall, the Department Store, The Communal House Hotel, a cinema, a boarding school (later the Social-Health Institute), a petrol station, and large-capacity garages. Their construction was a response to the insufficient civic amenities of the city.
The above-mentioned constructions consisted of the 6.15 × 6.15 m system used by the company and which was originally intended for the manufacturing sector (more information about the construction system can be found in the tour about the factory site). The structure of the factory building is manifest here in various types. The original economic pragmatism had become a corporate marketing brand, an advertising tool that determined the architectural design of other objects. Zlín architects succeeded in giving the newly built commercial zone a distinctive expression by emphasising or suppressing certain elements, and by the placement and orientation of the buildings.
The steps of young women and men led into the area of today's Labour Square several times a day. In the morning they went through it on the way to the factory. After the noon “autocall”, they flocked across the square for lunch, to relax, and some even managed to take in a short movie at the cinema. In the evening, they walked through the square on their route between the canteens, boarding schools, and school classrooms, usually several times.
The layout of commercial buildings, at least initially, corresponded to the older spatial arrangement of parallel access roads (to Malenovice and Březnice). Later they were treated more autonomously, their structures were supposed to close the southern front of the intended Labour Square. At the time of its formation, the inner space of the square served the current needs of the company - besides temporary stall sales, dozens of regular buses transporting employees from shifts were parked there.
Specific use was granted in the 1920s and 1930s to a triangular space enclosed by Malenovská Street (today's TomášBaťa Avenue), the southern front of the newly built Market Hall and the eastern front of the arcade of brick kiosks adjacent to the Market Hall. The zone thus defined became the first employee rest area. As the photographs of the period illustrate, impressive contrasts emerged in the square shortly after opening: unusual functionalist architecture, a modern industrial infrastructure, precisely structured meal and rest times contrasted with the woollen scarves of young female workers from nearby villages, roofed pergolas surrounded by unclipped lawns and densely planted trees, and richly decorated handrail benches a throwback to pre-Baťa patterns and models.
The design of the square was also defined by architectural modifications from the mid-1930s (the last architectural intervention in the space for many years to come) executed with regard to the contemporary needs of the adjacent factory. The open areas with low-cut lawns corresponded to the demands of organising the grand May Day celebrations, in which tens of thousands of employees and spectators demonstrated the power of factory management in the city. The dynamic composition in the otherwise horizontally arranged space of the square was maintained by a massive water fountain. Its vertical volume was accentuated by a standing elongated glass advertising post topped by a clock.
On weekdays in good weather, the square served as an area for recovery, where employees at lunch break could recharge their batteries for the next part of the shift.Baťa youth behaved spontaneously when using rest areas. Period photographs depict dense groupings of young men lying on relatively small lawns. However, a similar idyllic setting was bound only to more favourable weather in the warmer part of the year. 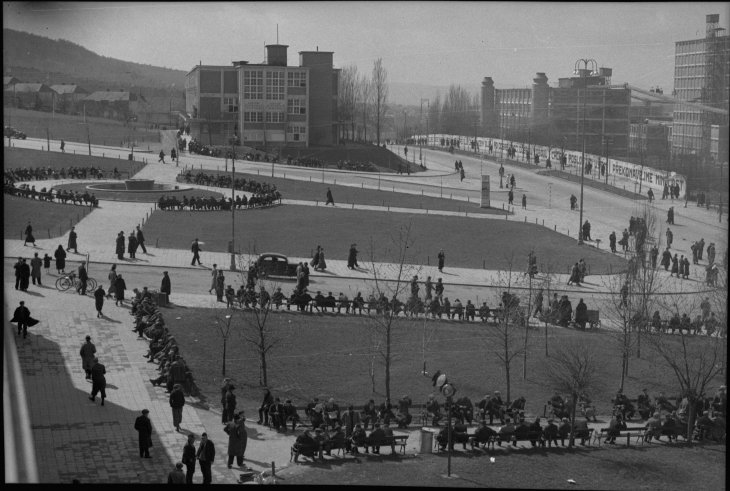 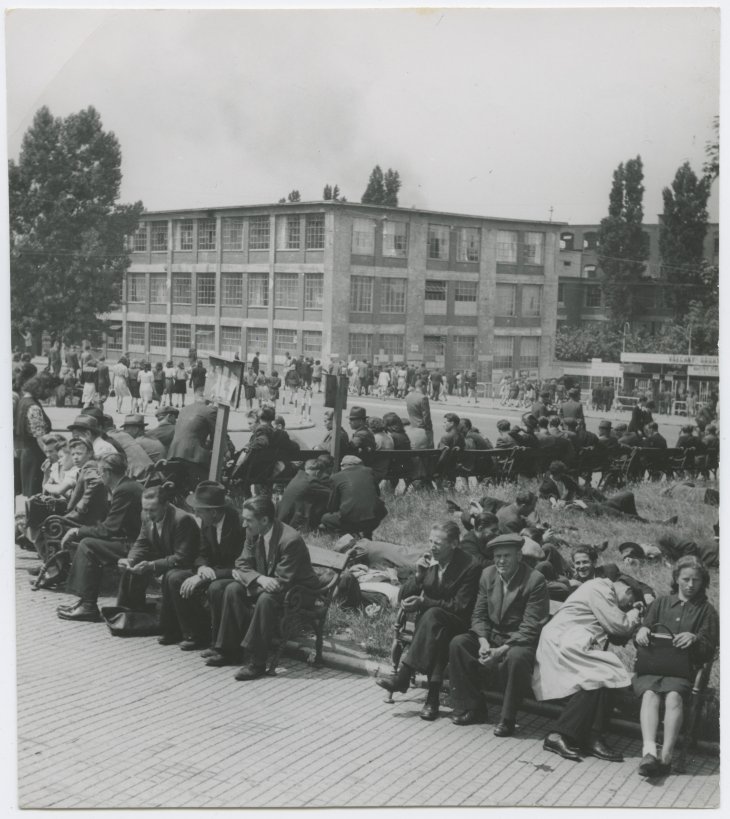 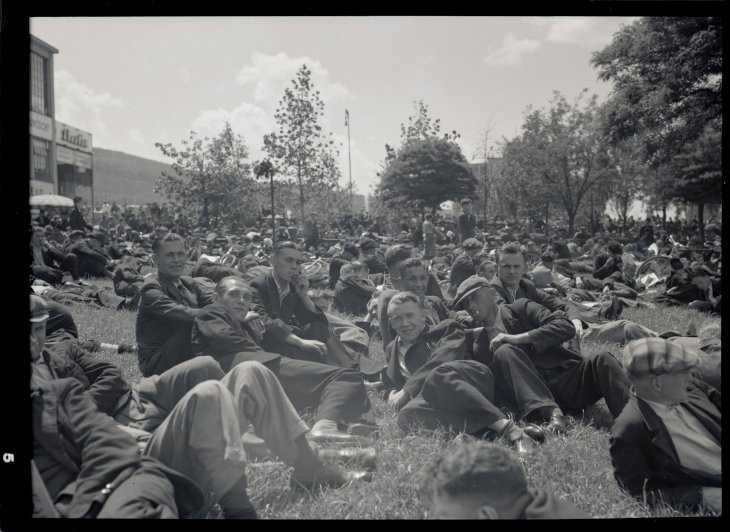 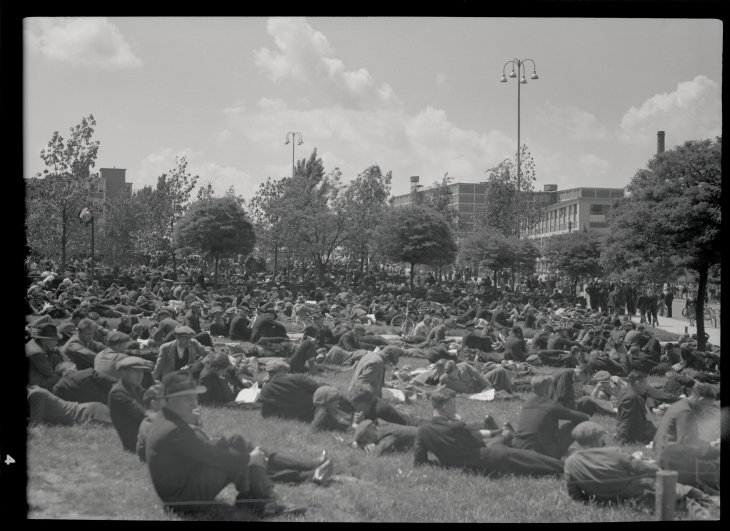 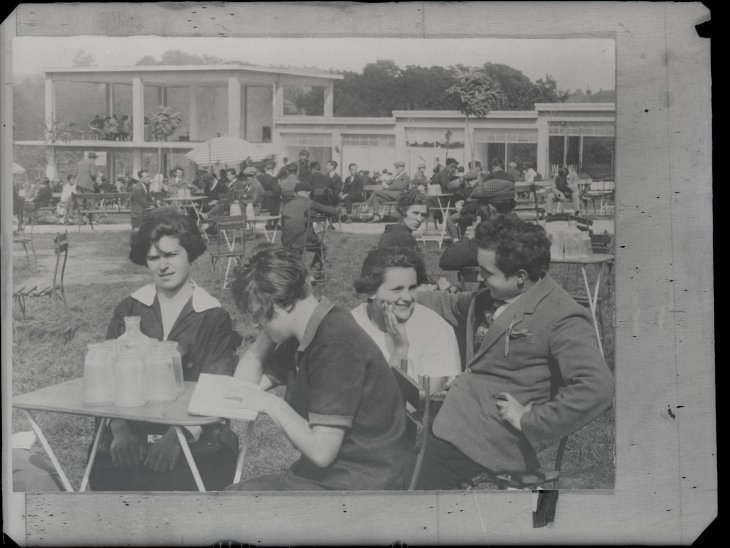 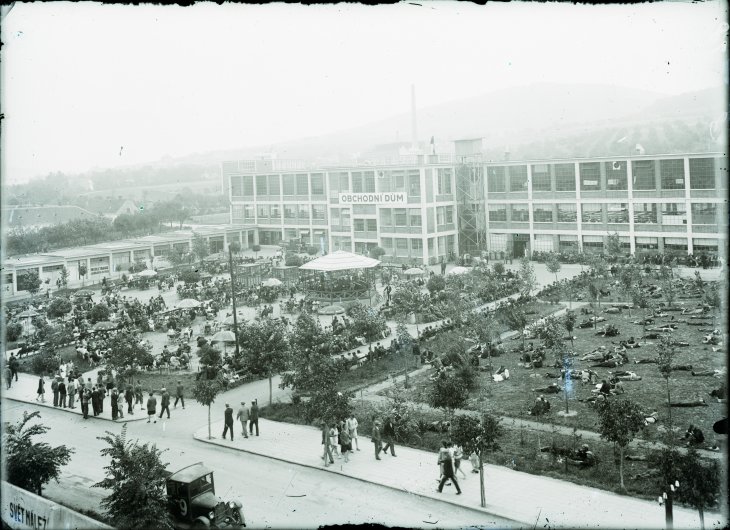 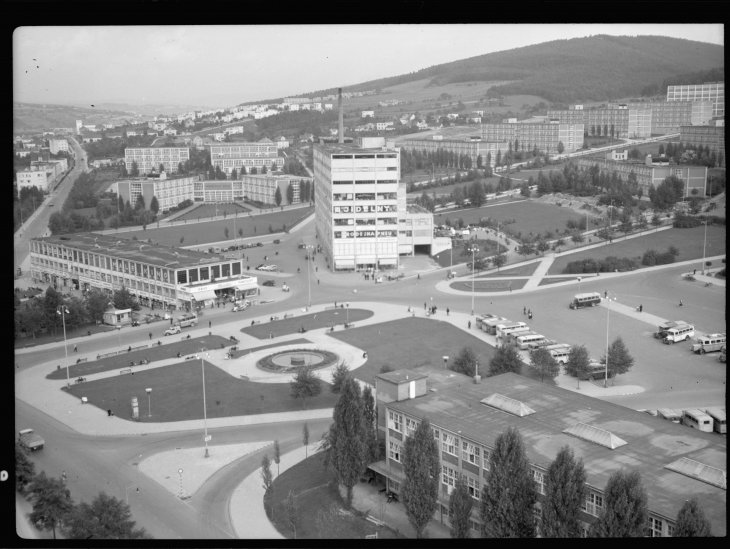 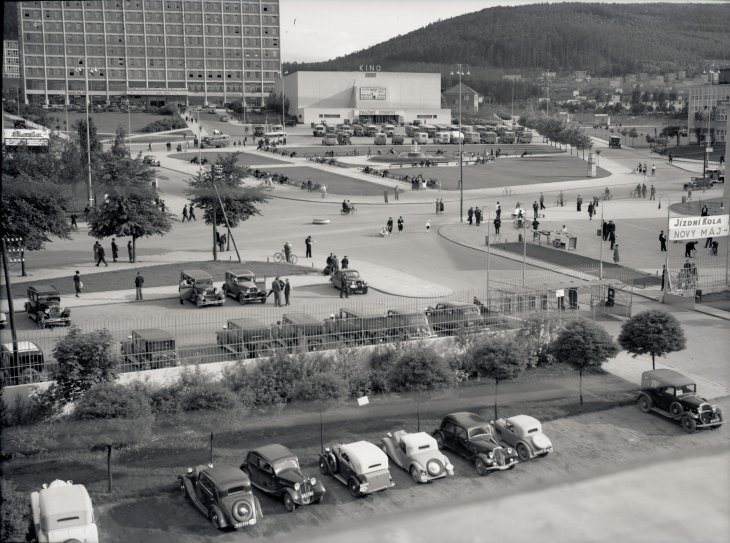 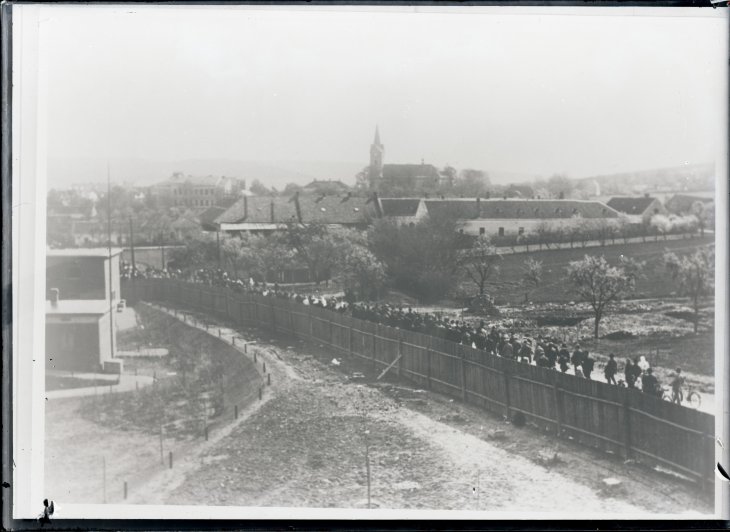