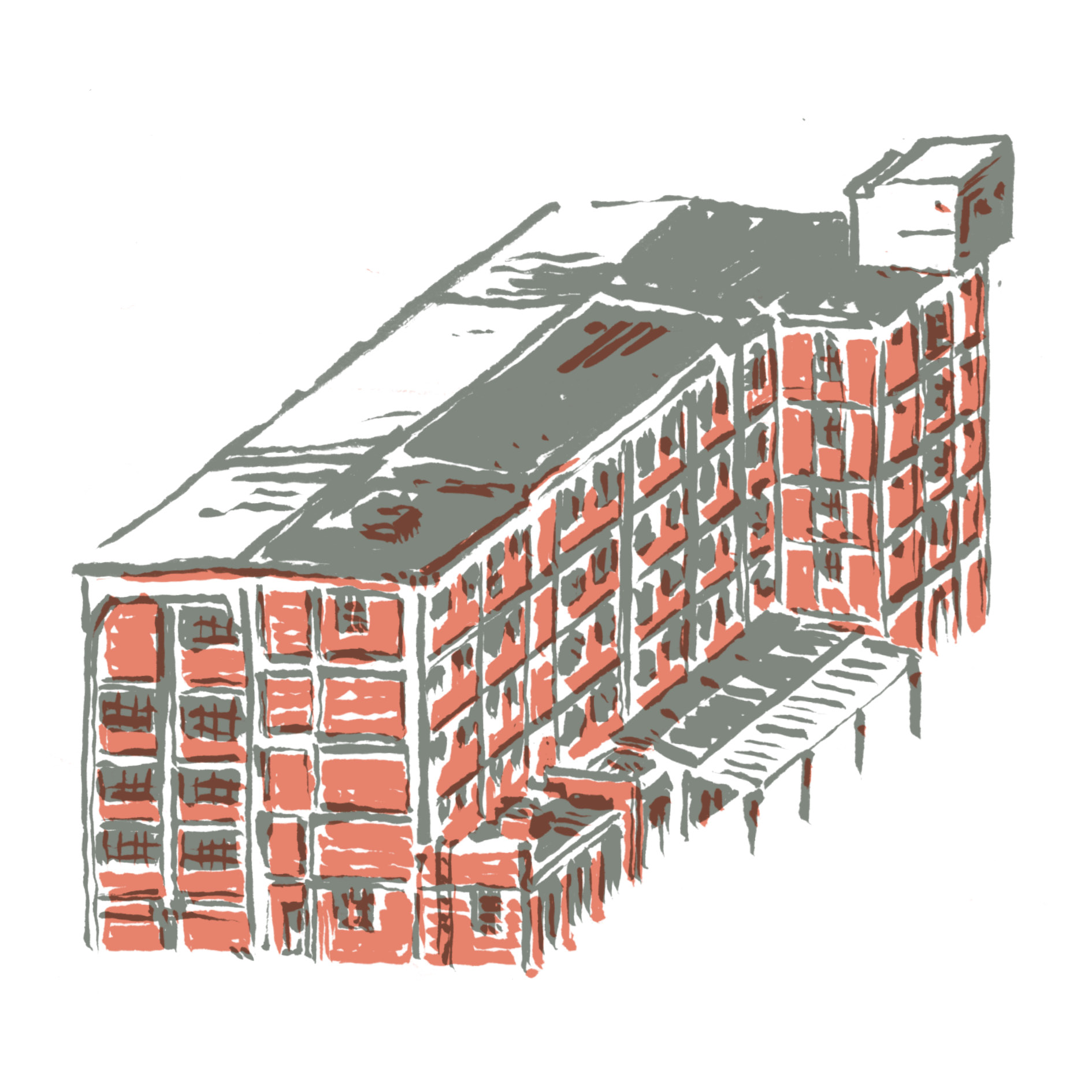 Building No. 45 is a standard five-storey building built for the needs of the rapidly developing Baťa company. It is situated in the middle of the factory premises laid out according to a master-plan by František Lýdie Gahura. The building is a prime example of how production facilities were treated in the 1930s and how their function changed over time.

Factory building No. 45 is larger than the standard dimensions: a floor plan of 80.5 × 20.24m compared to the usual 80 × 20m. It was completed in 1928 based on the design of Arnošt Sehnal. The construction department of the Baťa company managed to hand over the building for use within five months of the start of the excavation works. This rapid rate of construction corresponds to the advanced degree of standardisation and typification that prevailed in the plant. Due to a need for greater capacity, the five-storey variant of the factory building replaced the three-storey version during the 1920s. The layout is again a central corridor lined with production spaces on both sides.

The load bearing construction is a reinforced concrete frame. A novelty compared to three-storey buildings were the supporting columns of circular cross-section, the use of which, however, was not the rule. Building no. 45 contains both types of columns. In the main building there are columns with a square cross-section, while in the outbuildings there are columns with a round cross-section. The bases of pillars were usually connected to reinforced concrete frames. There are larger inter-window concrete pillars (extended from 30 cm to 45 cm) compared to three-storey buildings. Most of the side walls were filled with spacious windows in simple iron frames.

The ceiling of the fifth floor was also the roof, which used to be made with only a slight drainage slope, without thermal insulation. Only subsequently was it covered from the inside with mineral bonded wood woolboards. The roofing consisted of a simple tar-free roofing cardboard laid on a minimal layer of levelling slag concrete. The five-story buildings were heated by warm air distributed through concrete ducts located under the windows.

A total of five outbuildings were gradually added to the basic block of building No. 45. In addition to the standardised extension in the grid of the 6.15 × 6.15m module on the longer (northern) side of the building with the size of three module fields (3 × 1), two more one field extensions were added on both shorter sides. As with the three-storey buildings, a U shaped staircase and service areas for employees were located in the annexe - changing rooms, washrooms, toilets, and an electrical substation. Depending on their role in the production process, the buildings were often supplemented by open outdoor steel stairs, freight elevators and ramps.

As with other factory buildings, economic considerations and the financial constraints of the builder, the Baťa company, were also an important factor in the construction of building no 45. To reduce costs, clay, gravel and sand from the Dřevnice and Morava rivers were often used, instead of quality materials. Consequently, many of the factory buildings soon suffered from structural and construction defects. They could not withstand heavy loads, and it became necessary to change their purpose. In 1942 an in-depth inspection revealed the poor technical condition of building no. 45. The building was to serve only for another six to eight years, after which it was to be demolished and its place filled by a new building. Until then, the existing building was to be utilised for anything other than production purposes.

In May 1942, the ground floor housed a rolling mill, carton production, and an electrical substation. On the first floor was the handling of textiles, a preparation room, and the production of wooden soles and heels. On the second and third floors, there were shoe workshops, a production of wooden shoes, an office, and a substation. On the top floor, women's shoes were made and moulds were stored. In 1956, the building burned down, so a year later the fifth floor was partially dismantled.

Currently, building No. 45 is privately owned and its commercial, warehouse, production, and office space is leased. It has undergone a partial reconstruction, which is most evident in the interior. The exterior of the building is neglected; the facades remain uninsulated, so the strong weathering of the perimeter masonry is clearly visible. The building is located in the heart of the factory premises near the Central Shoe Warehouse and retains its raw industrial character.

The space between buildings 44 and 45 is one of the few places where you can see how much greenery there was in the 1930s. Greenery was an important part of the area. However, this green area remains neglected and unmaintained. Even so, it is one of the most authentic places in the entire factory district. In the surrounding area we can find details such as rails, cable tracks, and the original numbers on the facades. 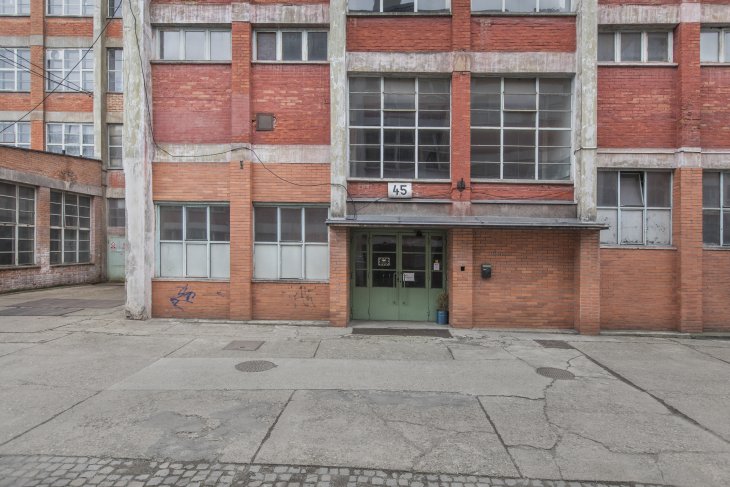 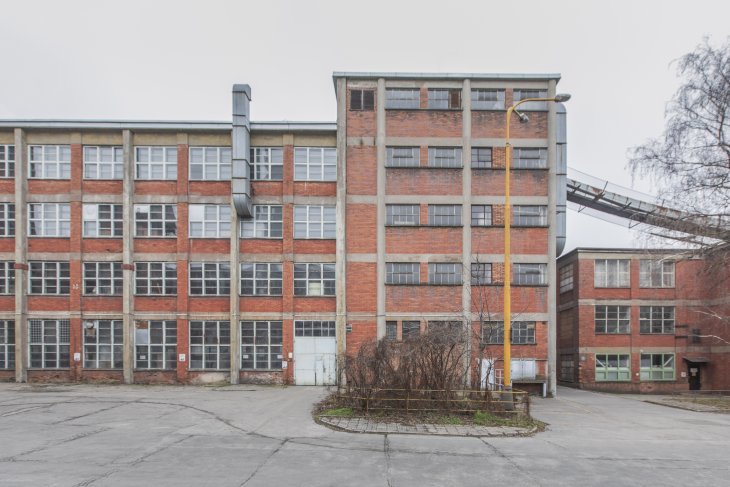 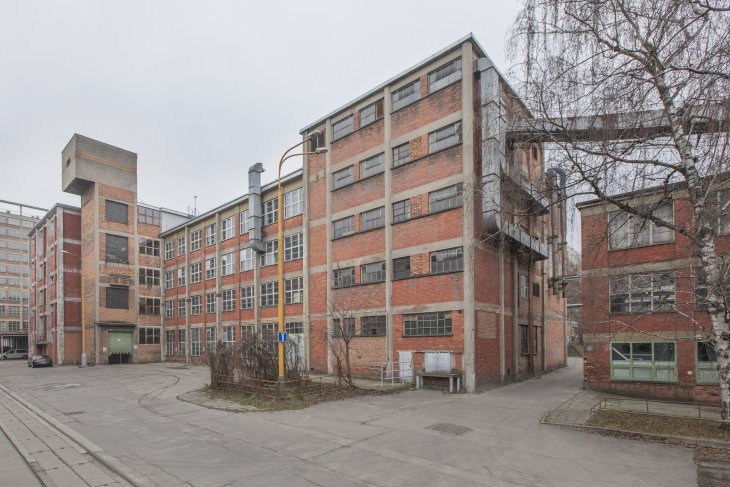 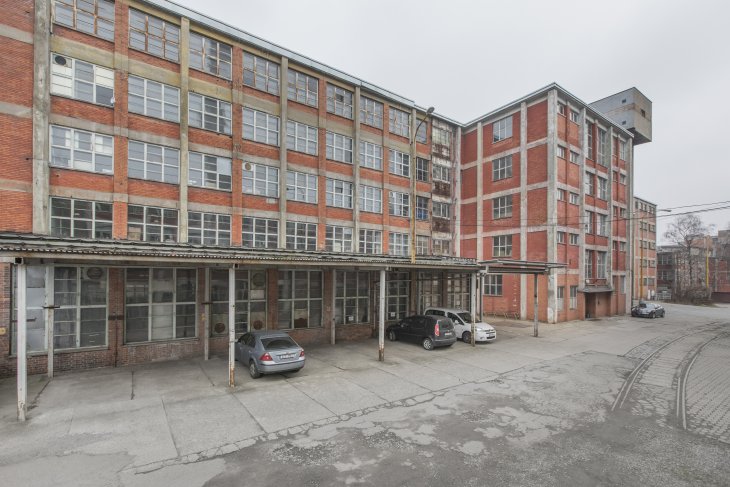