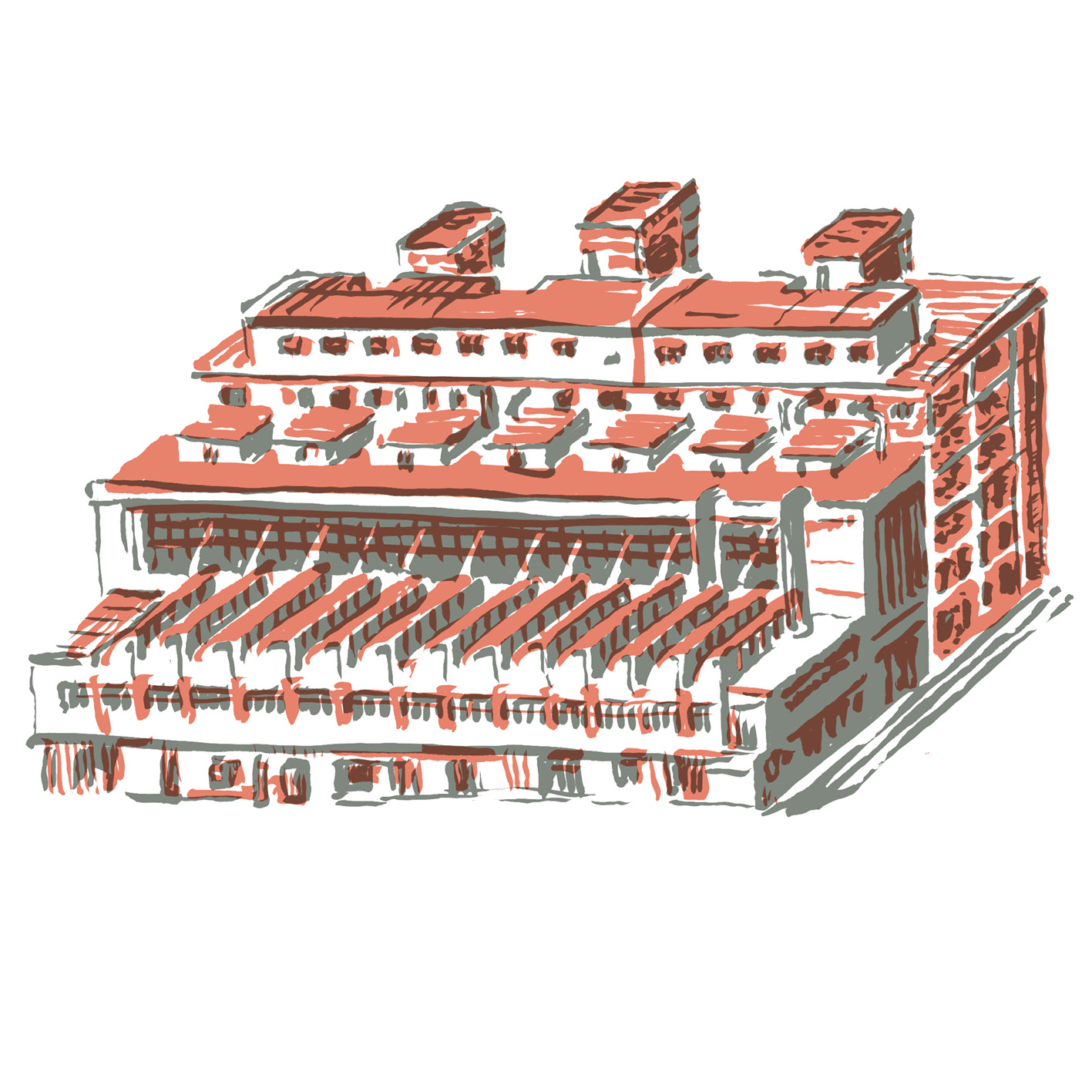 On the site of today's building no. n 43, there was originally a ten-storey industrial building from 1933, which served mainly as a warehouse. During the bombing at the end of the war, however, it was severely damaged and had to be pulled down. In the years 1948–1949, a central rolling mill for rubber compounds was built on the vacated plots. Its author was a former employee of the Baťa Construction Department, architect Jiří Voženílek, who also designed buildings No. 14 and 15, three rows down the road at the same time. The new building consisted of a six-storey raw material warehouse and an adjoining rolling mill hall. For administrative reasons and due to the change in technology, the construction was interrupted, the implementation in the first half of the 1950s was divided into stages and only finally completed in 1964. The rolling mill hall by Jiří Voženílek was characterised by a thin shell saw tooth roof with dimensions of 12 modules of 9m span in a transverse direction and 15 modules of 6.15 m span in the longitudinal direction.

On October 27, 1971, a fire broke out in the south-eastern part of the complex, which lasted for three days. The warehouse and rolling mill buildings were completely destroyed. As a result of significant damage, which was estimated at 53 million crowns, a new building was designed in the years 1972–1975 by architect J. Jenerál and ing. F. Šula from Centroprojekt Gottwaldov. Construction costs climbed to 158.28 million crowns. The national company Svit Gottwaldov (before 1948 the Baťa company) was one of the largest shoe companies in Czechoslovakia in the 1970s, and the immediate resumption of operation of the rolling mill was crucial for further production. In order to resolve the situation quickly, a commission of the Ministry of Industry was set up, which, together with Svit's management, proposed the construction of a rubber rolling mill on the site of the destroyed building.

The rolling mill complex from the 1970s was organically integrated into the master-plan of the factory district. The main five-storey part, which ensured the operation of the rolling mill, extends over a floor plan of 92 × 19 m and has a height of 26 m. It is a standard layout building (corridor and production spaces on both sides) with a load-bearing structure consisting of a steel frame. The perimeter walls are made of face bricks and continuous steel windows. The building is connected along its entire length through a 3.15 m wide bay to another building - a steel hall. Cloakrooms and auxiliary rolling mill operations were installed here. The associated compressor room with a floor plan of 31 × 25 m took on a form of a hall with one storey extensions. The central rolling mill was one of the most up-to-date equipped operations in Czechoslovakia and its renovation took place in an unusually short time. The building still serves production, along with office space and smaller operations. The building still has an industrial character; it is uninsulated. Later a connecting neck with building no. 32 was added.

The second stage of construction of new facilities, connected with the operation of the central rolling mill, continued in the western part of the complex. During the 1970s and 1980s, another 19 production buildings were built here, the most important of which were the five-storey chemical and grinding warehouse and the rubber waste regeneration hall (buildings no. 113, 123 and 114). The traditional face brick masonry was again used for the new buildings, so the overall architectural character of the factory complex remained consistent. 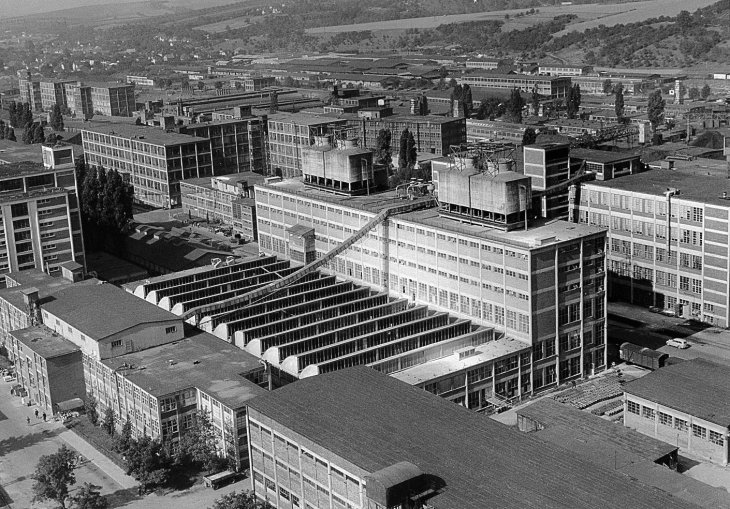 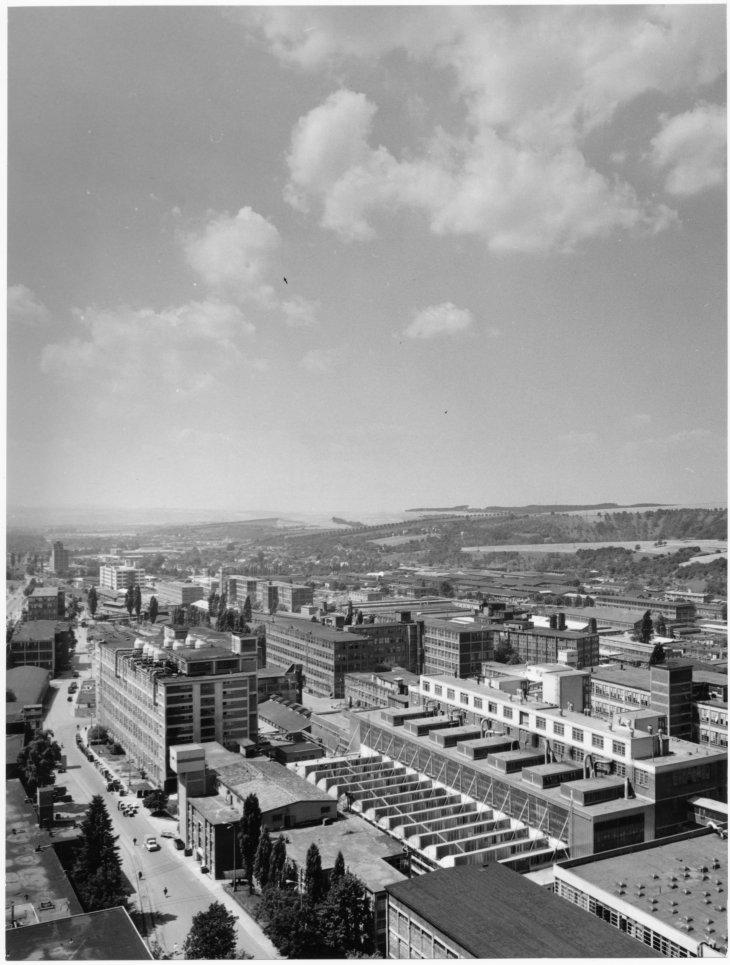 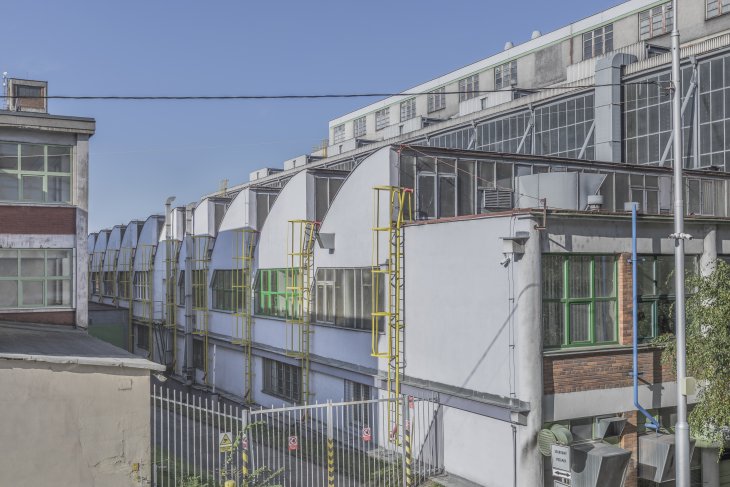 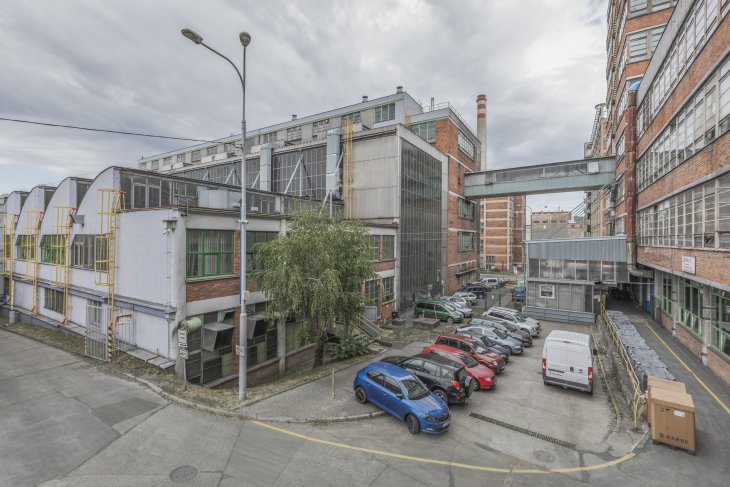