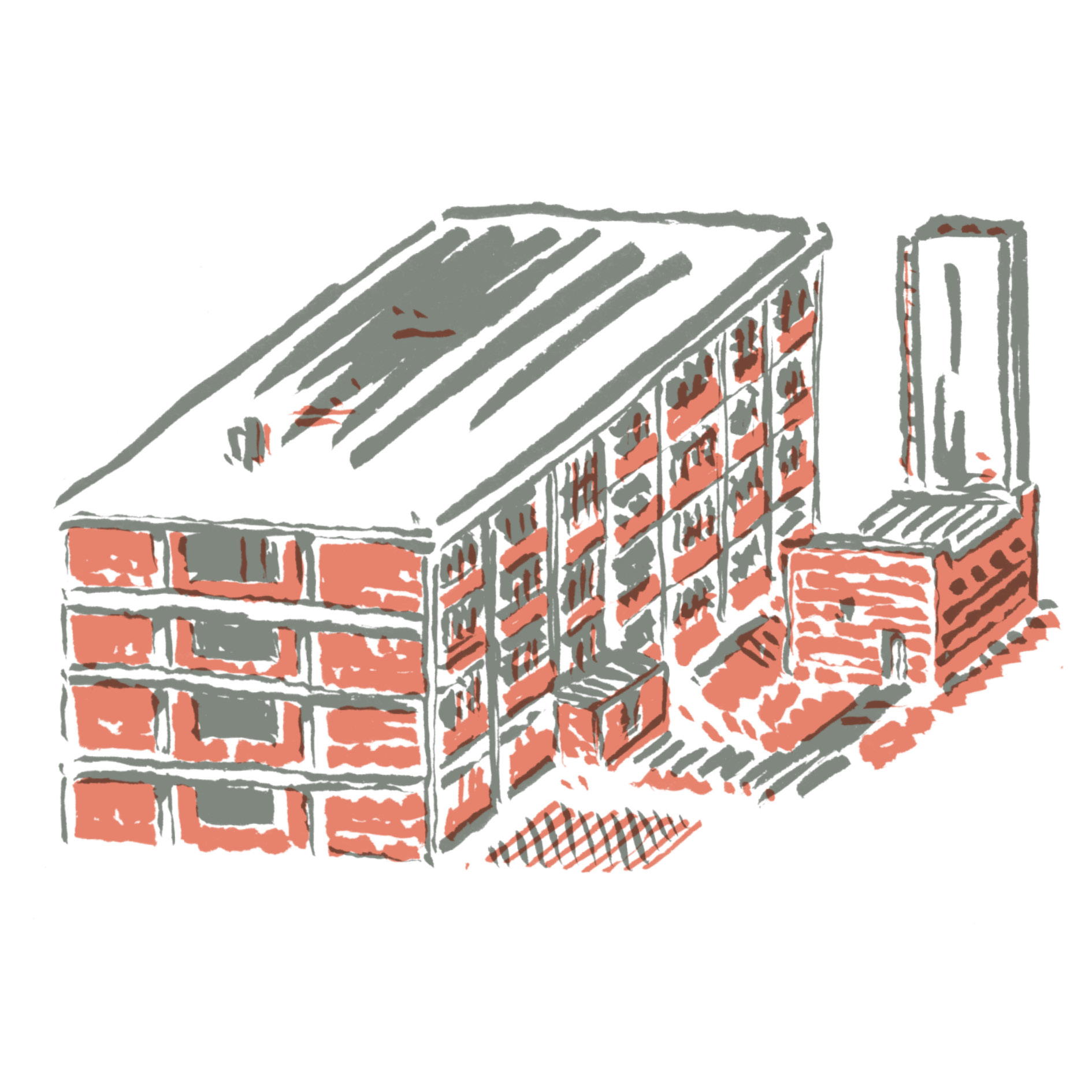 The four-storey school building is located on Mostní Street, in the very centre of the residential development of family houses intended for the employees of the Baťa shoe company. The Letná district, placed according to the master plan of Jan Kotěra and František Lýdie Gahura, south of the factory complex, was the first comprehensive example of the company's accommodation strategies in the interwar period. The company offered its employees housing in generously designed neighbourhoods of a garden character with separate houses in various options, from the initial and smallest fourplexes, through the most common duplexes for two families to comfortable single-family houses for higher-ranking employees.
These employee residential zones were complemented by basic educational institutions, small commercial buildings and leisure facilities. The municipal school in Mostní, approved and opened in 1932, when Letná was already largely populated, is a prime example of this approach.
The school is one of the few completed projects of architect Miroslav Lorenc from the period when he worked in the Baťa company Construction Department from June 1930 to September 1931, before leaving and setting up his own private office due to disputes with management over the large cinema project and its financing.
As before with the school district near náměstí Práce, where Lorenc designed the trade school, the school in Letná is based on the typology of the company's factory hall. The longitudinal building, oriented north-south, uses a standard Baťa reinforced concrete skeleton with a module 6.15 × 6.15 m. The unplastered round columns give rhythm to the facade filled with face bricks and casement windows with wooden frames filling the entire span of the fields. The school, standing exactly between two rows of four-storey houses, is accessed from separate road branching from Mostní street, which leads to the main entrance on the east side of the building.
As was customary with the Baťa buildings, the school is designed as a three-story building with a central corridor and individual classrooms along both sides. A concrete staircase with artificial stone surface is to the west of the building, as is manifested on the façade by a large strip window. On the ground floor, which reacts to the sloping terrain, there were in addition to the entrance foyer, the janitor's apartment and the changing rooms with showers and the washroom, as well as a spacious gym. The next two floors with 3 classrooms on each side of the corridor were reserved exclusively for study. In addition to the classrooms and sanitary facilities, there was also a headmaster's office and a teacher room on the 2nd floor. The top floor offered a large puppet show, workshop and other classrooms. Through the glazed entrances it was possible to go directly to the open large rest terrace which was created by cutting the last floor short by two sections. It was designed especially for children with lung problems that were most at risk from tuberculosis. In addition to the current requirements for hygiene and lightness of school facilities, the overall concept of the school also reflected the modern approach to education, which was especially in demand in the environment of a dynamic corporate city. The classrooms were heated by radiators and were equipped with washbasins and built-in wardrobes, the corridors had waste chutes, drinking water fountains on each floor and showcases with educational aids so that students could absorb valuable information outside the classroom.
To this day, the building is used for education - it provides facilities for a primary school dedicated to pupils with special educational needs and for other private schools. Despite additional minor building modifications, its original material, layout and construction solution is still very clearly visible. However, the original windows and entrance door were replaced with lower quality modern plastic ones. The most significant deviation from the original design is the superstructure. The terrace on the upper floor is no more, which represents a significant loss both for the overall architectural expression and for the offer of recreational activities for local pupils. Lorenc's school was later supplemented on the east side by a low single-storey perpendicular wing with a slightly sloping gable roof, connecting to the building by the former main entrance. It today serves as a school canteen.
KE
More photos 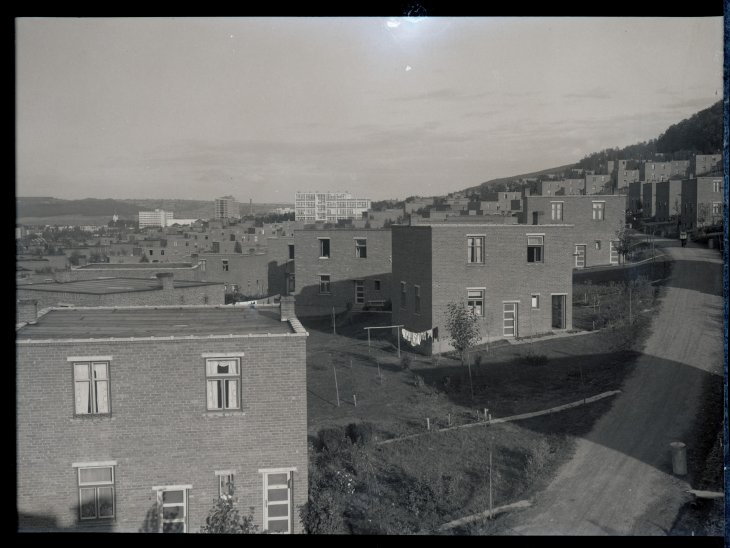 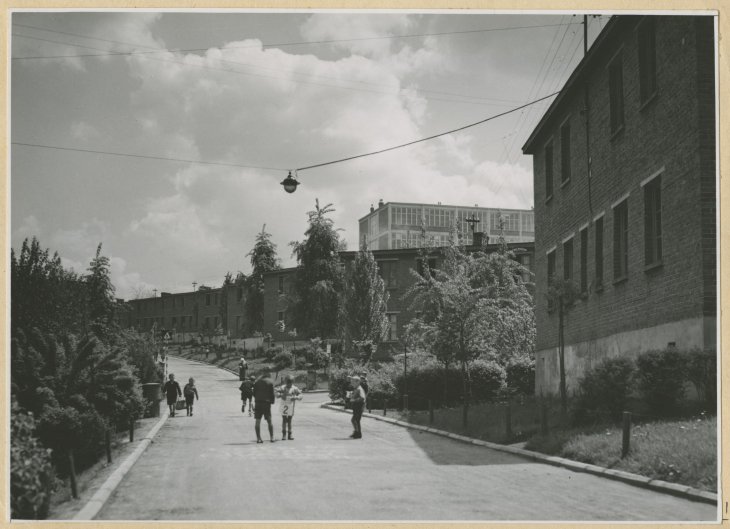 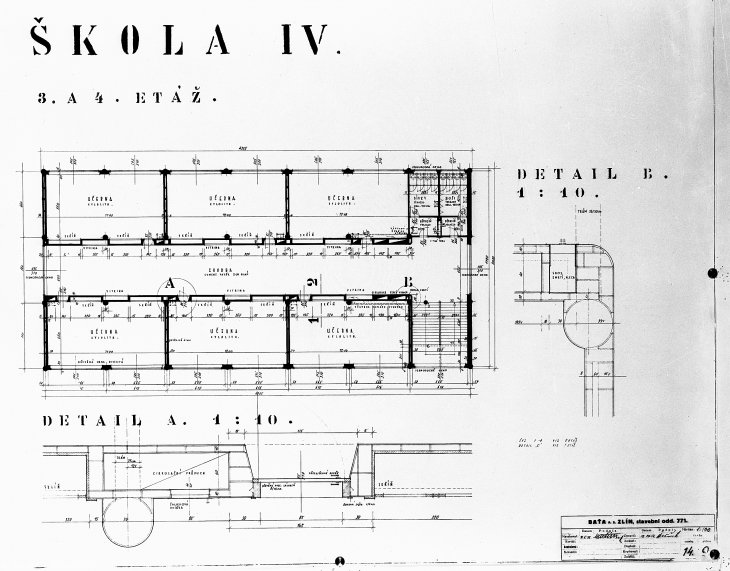 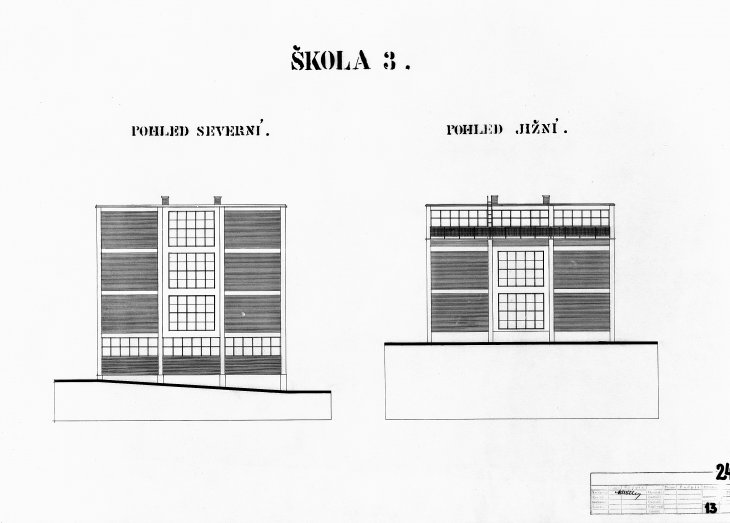 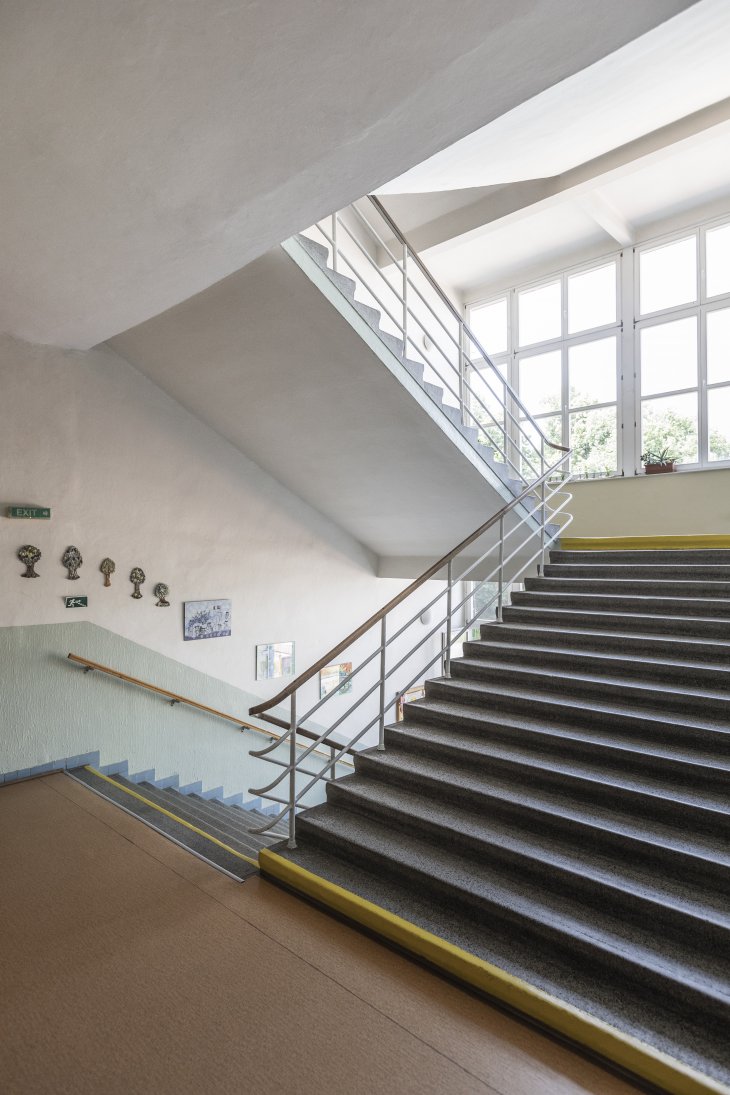 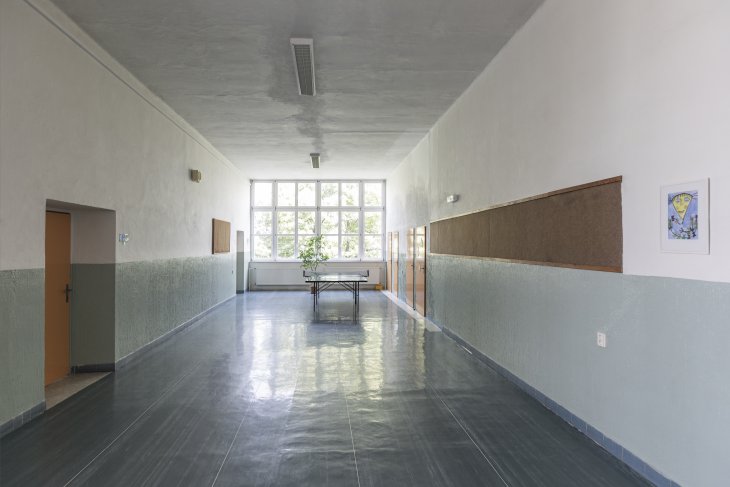 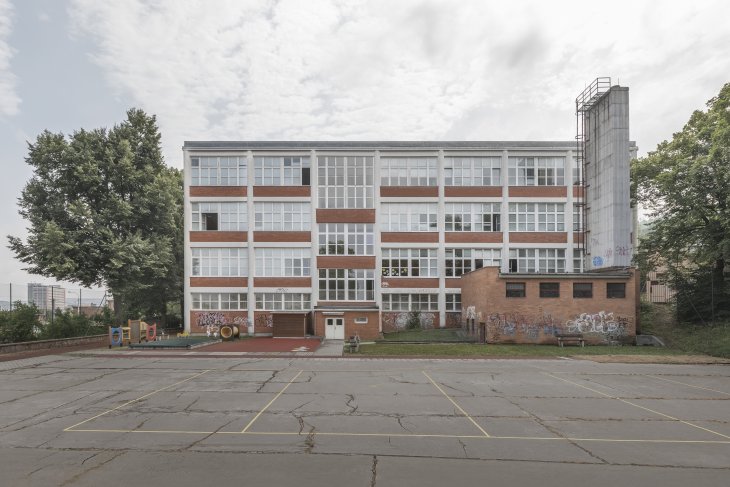 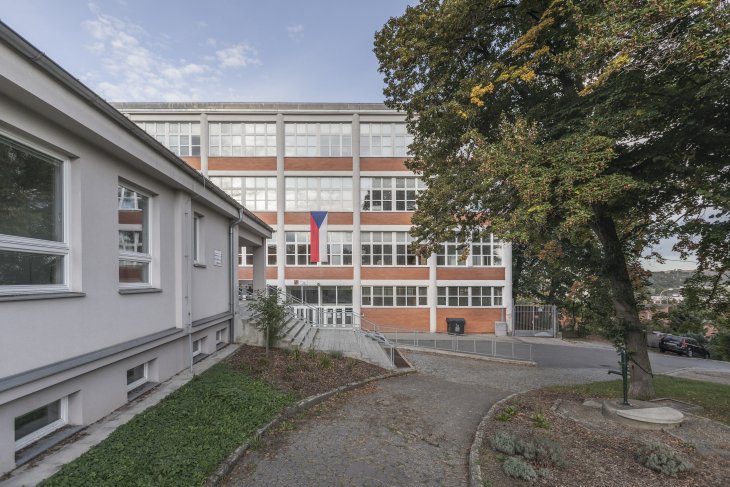 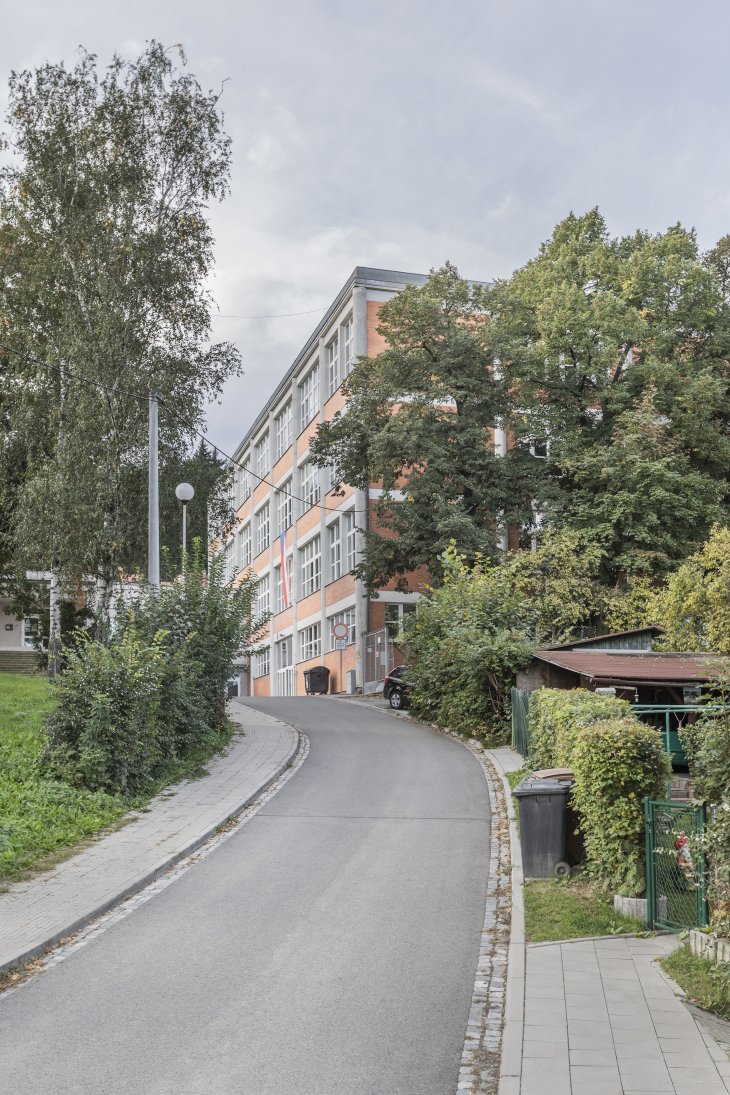