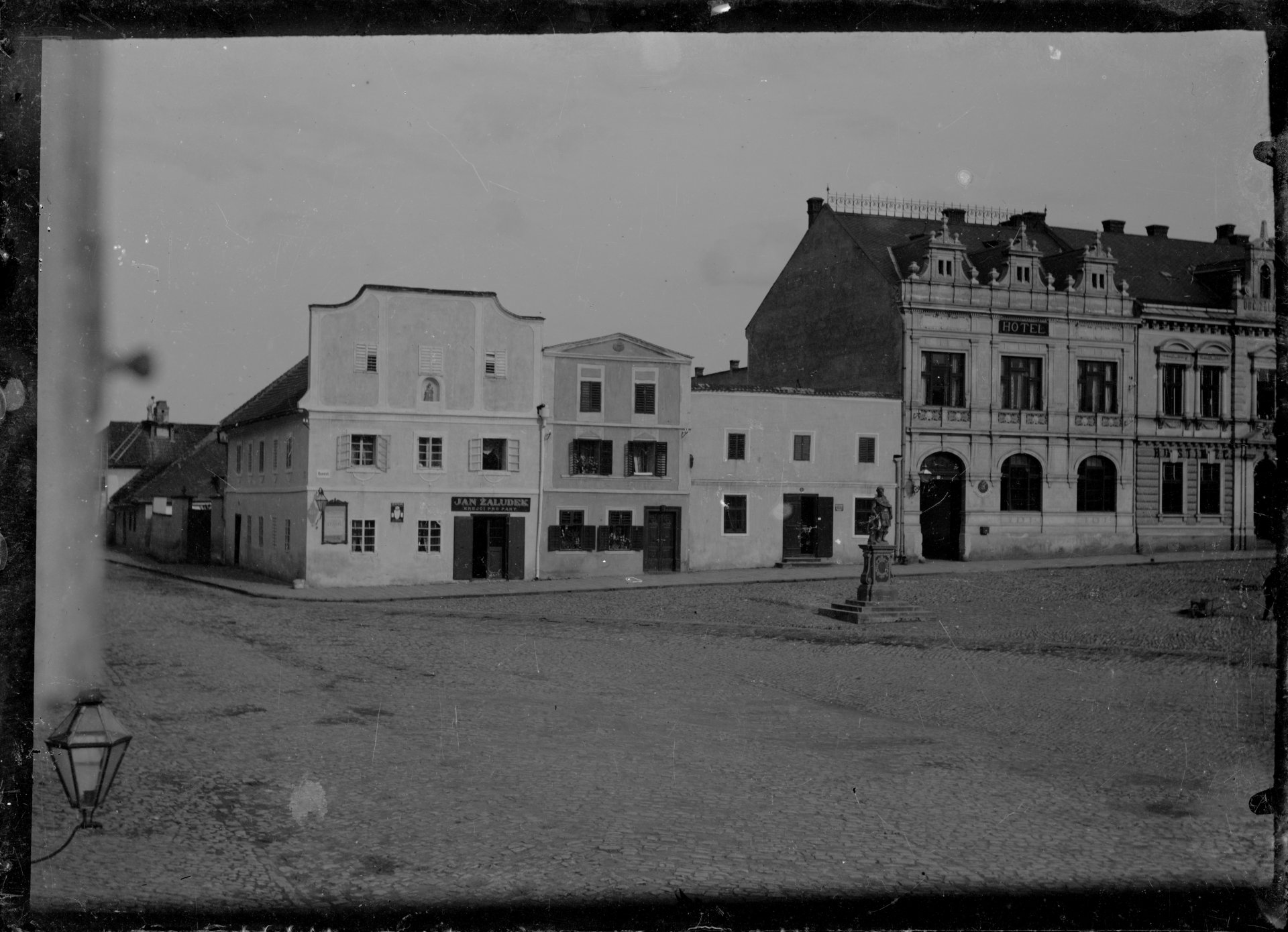 The business complex in the historical centre of the city is the most prominent modern intervention in the development of náměstí Míru, which barely evolved during the second half of the 20th century. A three-storey building situated on the eastern front of the square connects long-unused spaces and dilapidated buildings. The large plot of land consisted of two corner and four vacant plots. The name of the complex – Zlaté jablko (Golden Apple) refers to the old Zlín legend, the city named thus as a sign of its prosperity. The new shopping centre building had to comply with the conditions imposed by the city, namely the preservation of the original facade of the former Civic Savings Bank, which was designed by Dominik Fey in 1896. This neo-Renaissance façade became part of the architectural design of 2007. The design was done by architect Svatopluk Sládeček from the NEW WORK studio.
The current appearance of náměstí Míru (Peace Square) with Baroque statues of St. Donat and Florian is in many ways reminiscent of the old pre-Baťa town of Zlín, where diminutive two- or three-storey buildings appeared on historical plots of land. At the beginning of the last century, such family houses stood on the site of today's commercial complex. In the interwar period, architects independent of the Baťa company carried out their projects on Masarykovo náměstí (Masaryk Square), as it was called back then.
One of the most outstanding authors working outside the established Baťa Construction Department was Miroslav Lorenc, who designed dozens of buildings for wealthy citizens and entrepreneurs in Zlín. On the streets of Rašínova and Dlouhá there are several designs by Lorenc, which changed the entrance to the square in the 1930s. Lorenc's buildings are characterized by glass windows on the ground floor and ceramic tiles (otherwise virtually unused in Zlín). These include the house of the baker Mizera and the house of A. Minařík (later Avion) ​​adjacent to the corner house of Eduard Pelčák. Lorenc, as well as Sládeček later, solves the task of creating a larger usable area on the first floor with cantilevered upper floors.
In the case of Zlaté jablko, the protruding floors contain the halls of the multiplex cinema, whose volumes show in the exterior of the building; Lorenc cantilevered the flats separated from the commercial passage.  The shopping centre building is also clad with ceramic tiles alternated with large transparent shop windows, which render the movement inside the house visible. Svatopluk Sládeček a native of Zlín, is familiar with the local architecture and history and sensitively uses this knowledge in the design.
The exterior of the shopping centre consists of three different facades with clearly separated volumes. This simple division is supported by the use of dark and light glass mosaic for the individual volumes of the house. It is not the intention that the new building should stand out. It complements the eastern front of náměstí Míru, which includes the neo-Renaissance facade of the Civic Savings Bank. The light façade of the historic building continues with a composition of cubic volumes designed to match the scale of the surrounding buildings.
The composition shows Sládeček's distinctive approach, where continuous façade areas are complemented by window openings, in a way that is indicative of the architects idiosyncratic style, which he calls “figurineative” architecture. The rectangular boxes, which allow various perspectives and disturb the large façade areas, are an artistic motif used in the whole shopping centre. Bernard Weinstein's house from 1935 is incorporated in the corner on Rašínova Street. The largest uninterrupted volume of the house is formed by the facade on Dlouhá Street, with a distinctive motif of a film strip referring to cinemas on the upper floors and to Zlín's film history.
The interior of the department store is formed by an arcade in an organic layout, which can be entered from six sides. The arcade is illuminated by daylight through a glass roof with louvres. The motif of rectangular cut-outs is repeated on the railings on the higher floors. The shopping centre is connected to the houses on the adjacent street. From the second floor you can enter through the glass tunnel to the Elkoma house on Rašínova Street. From the first underground floor it is possible to walk through the underpass leading to the parking house situated across the street.
In addition to Svatopluk Sládeček, two other architects contributed in giving the building its shape: Ivan Bergman, who designed part of the department store next to the former Civic Savings Bank, and another Zlín based architect Pavel Mudřík, who designed the glazed connecting bridge above Rašínova Street. 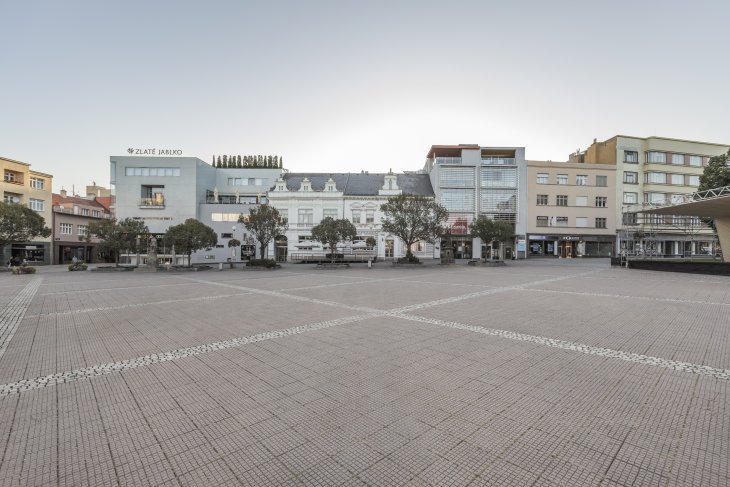 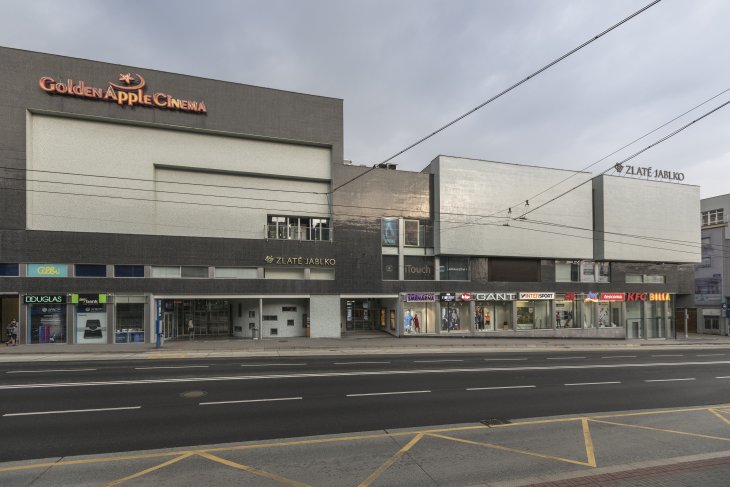 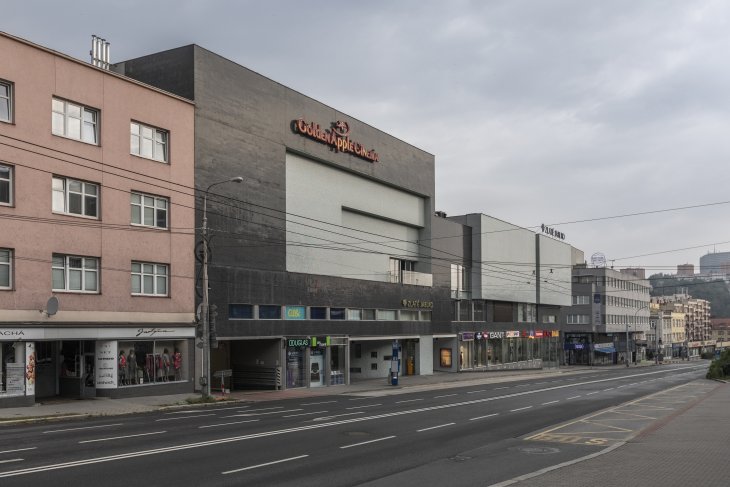 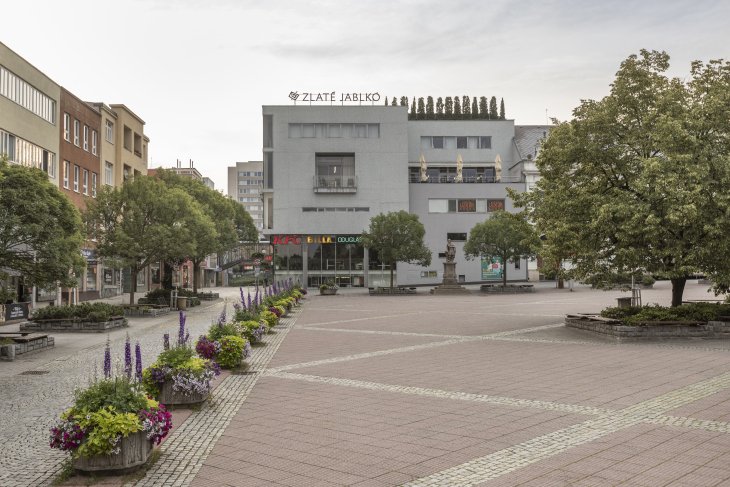