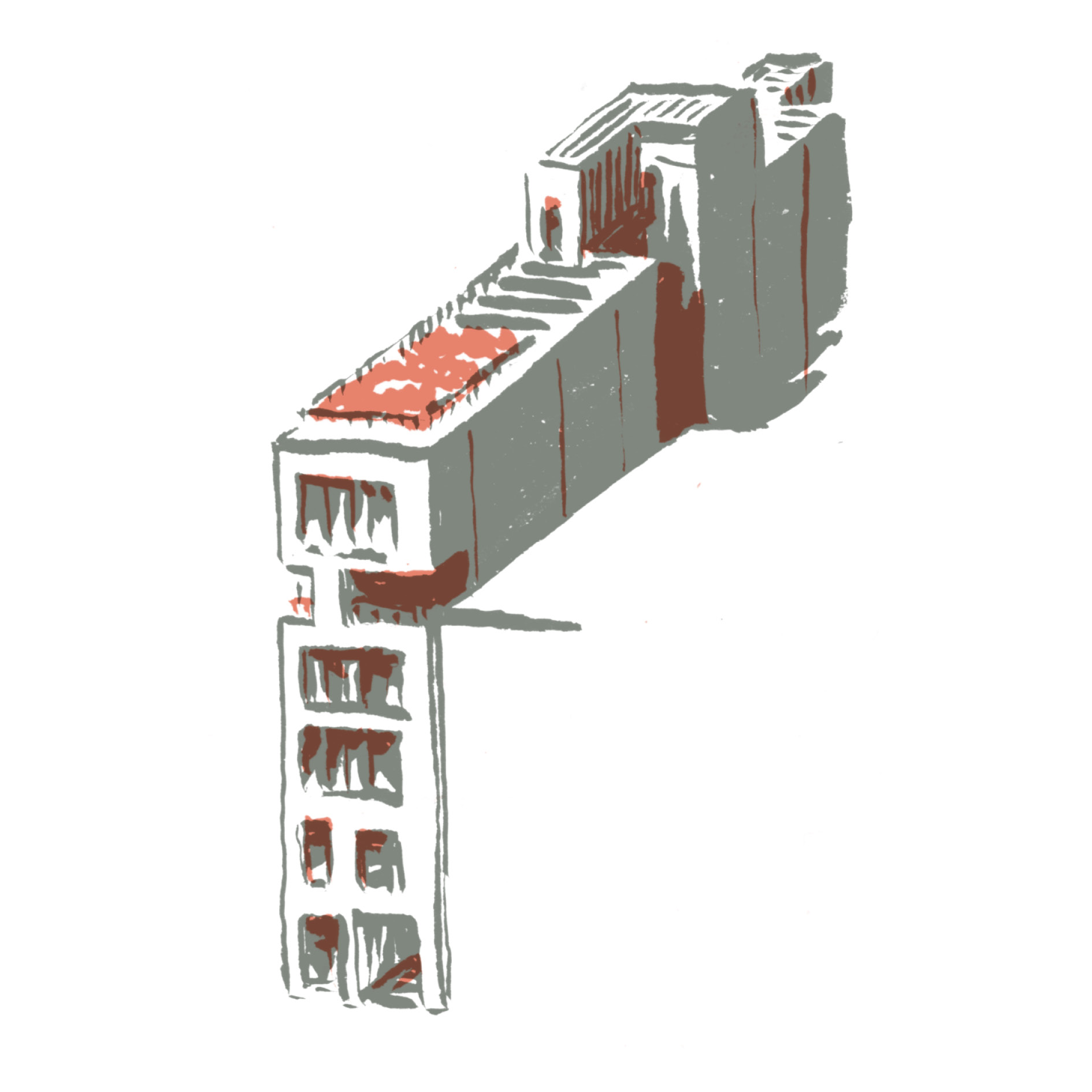 There used to be an Art Nouveau hotel where the multifunctional building stands, called the Hotel Balkan. House No. 61 was one of the main centres of cultural life in the 1920s and 1930s, a meeting place for both Czech patriots and students. According to the writer Antonín Bajaja, who is the grandson of Jan Knapek, the owner of the hotel Balkan, Leoš Janáček, Josef Váchal and Le Corbusier visited the hotel. The Baťa company also had its shop there.
By 1977, the already dilapidated building was pulled down and a new post office and telecommunications building extending to Bartošova Street filled the edge of the square. A gap remained between the old buildings and the post office building, for which architects Karel Havliš and Svatopluk Sládeček designed a new house several decades later, in 2002. A condition stipulated by the city councillors was that the passage be preserved. The second condition was that a 2 x 2m collector should be installed.
In designing the house, the authors had to deal with a complex plot of land 6.3m in width and 60m in length. The narrow plot was surrounded by buildings with large differences in height. The design responded by meeting the height of the telecommunications building, adding a loggia on the sixth floor. The plot also accommodated a new underground collector, to which the building foundations had to be adapted. This is one of the reasons the house construction is designed as a steel frame based on piles.
The multifunctional building is divided into two parts, which are operationally separated. The six-storey building with a roof extension and a paved roof terrace faces the square and contains a business parterre and offices. Generous flats of 180m2 and 200m2 were designed for the top two floors. The second part of the house houses two operations: a shop, and a café named the Balkan Express, which is a reminder of its glorious past. Each concern has its own staircase. The main staircase and elevator are contained in a tower facing Zarámí Street. The height difference between the two streets is offset by ramps, staircase, and elevator. The windows of the facade link it to the surrounding buildings, and its deliberate austerity reminds one of the commercial and residential houses designed by Miroslav Lorenc. Unusual for Zlín is the use of aluminium structured metal plates for the facade, which is combined with glass surfaces and glass blocks in the central part.
The building, one of the most striking modern additions to náměstí Míru, received from its authors the affectionate name “Emil the Robot” and belongs in a set of buildings that Svatopluk Sládeček calls “figurineative architecture”. The residential areas have now become offices, but the shopping arcade and café still serve their original purpose. The passage serves as a busy road connecting the main square with Zarámí Street.
LŠ
More photos 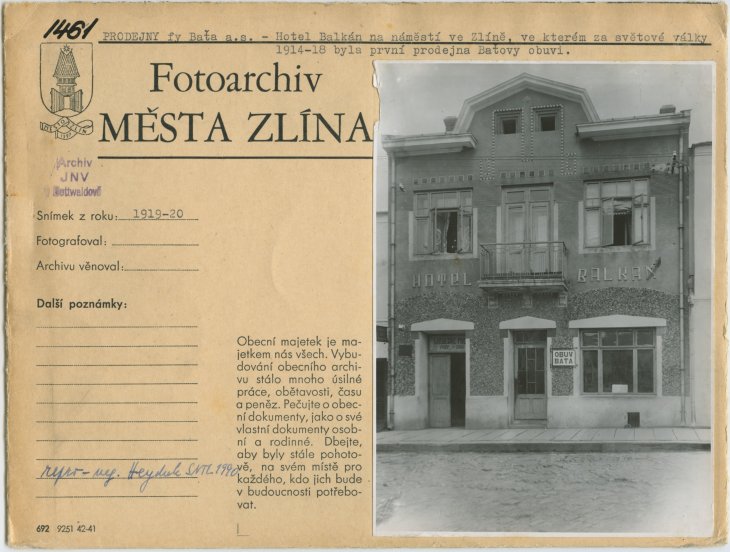 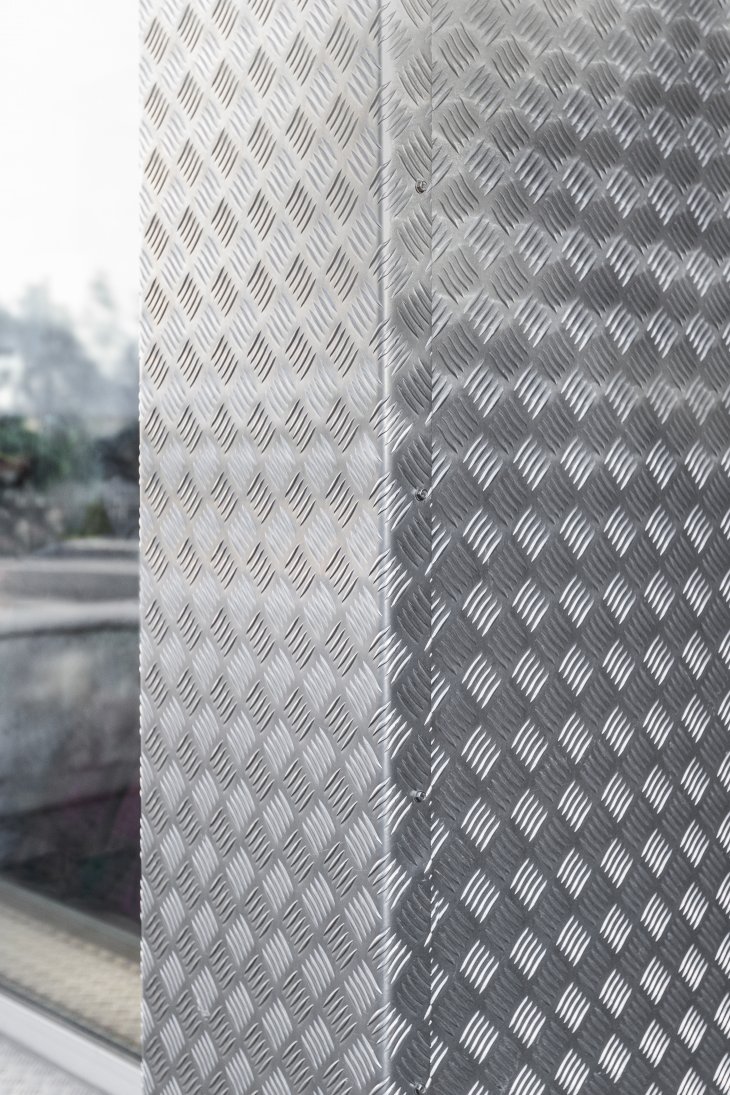 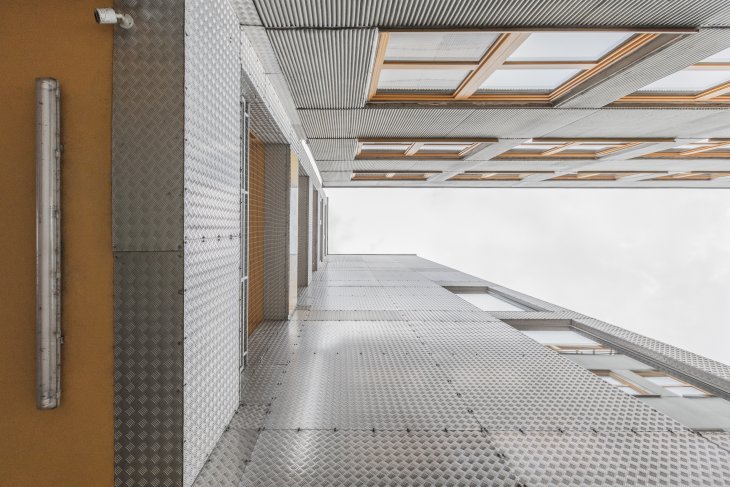 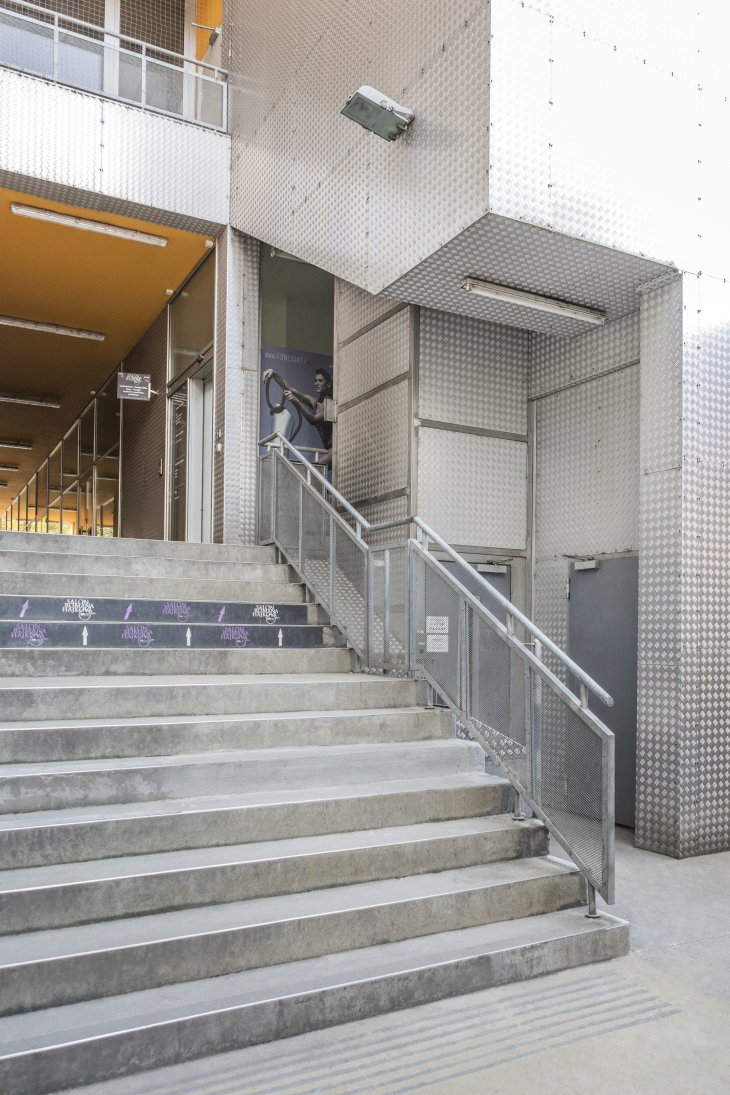 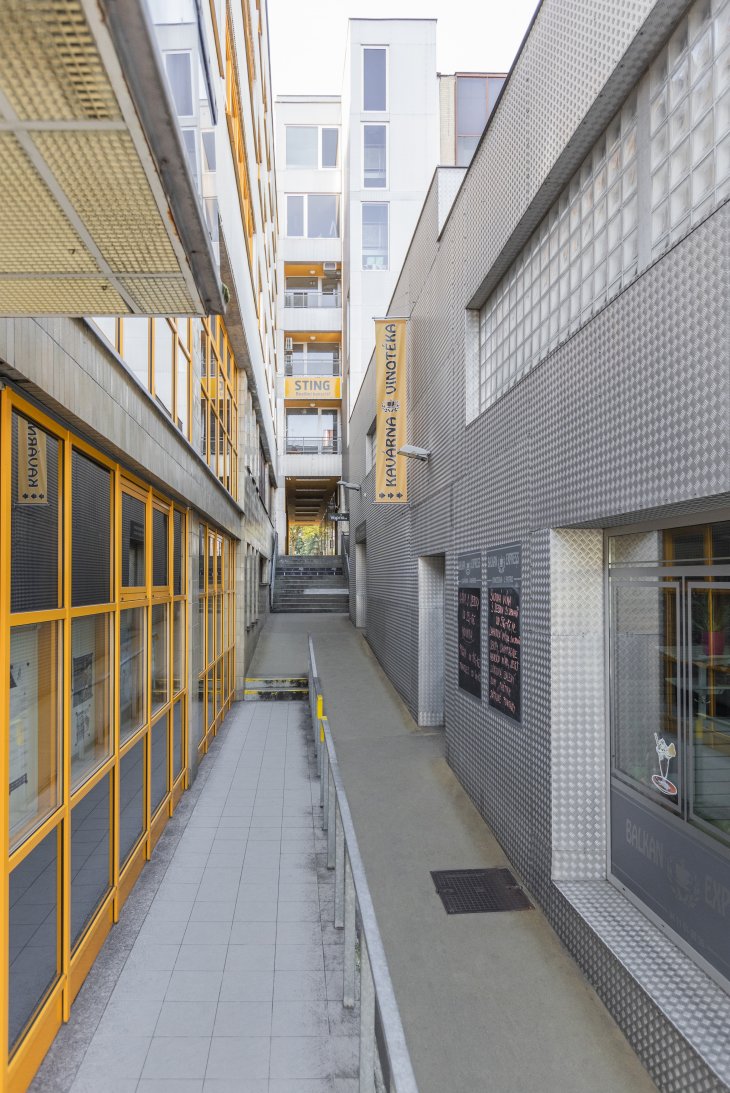 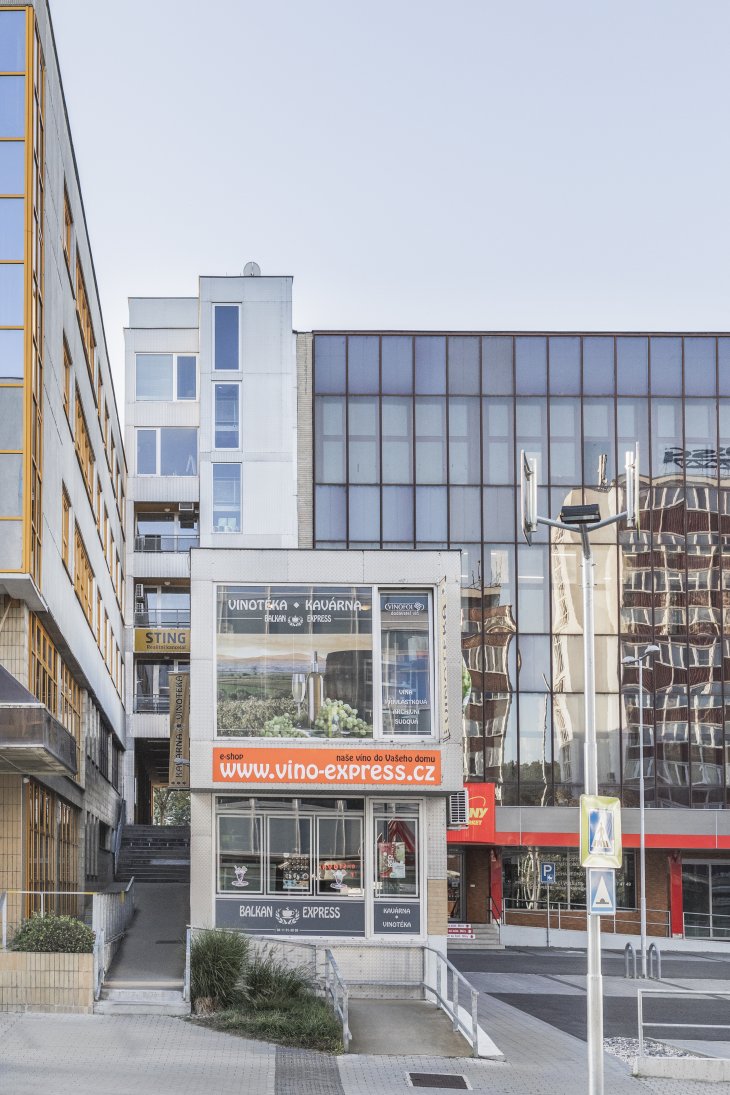 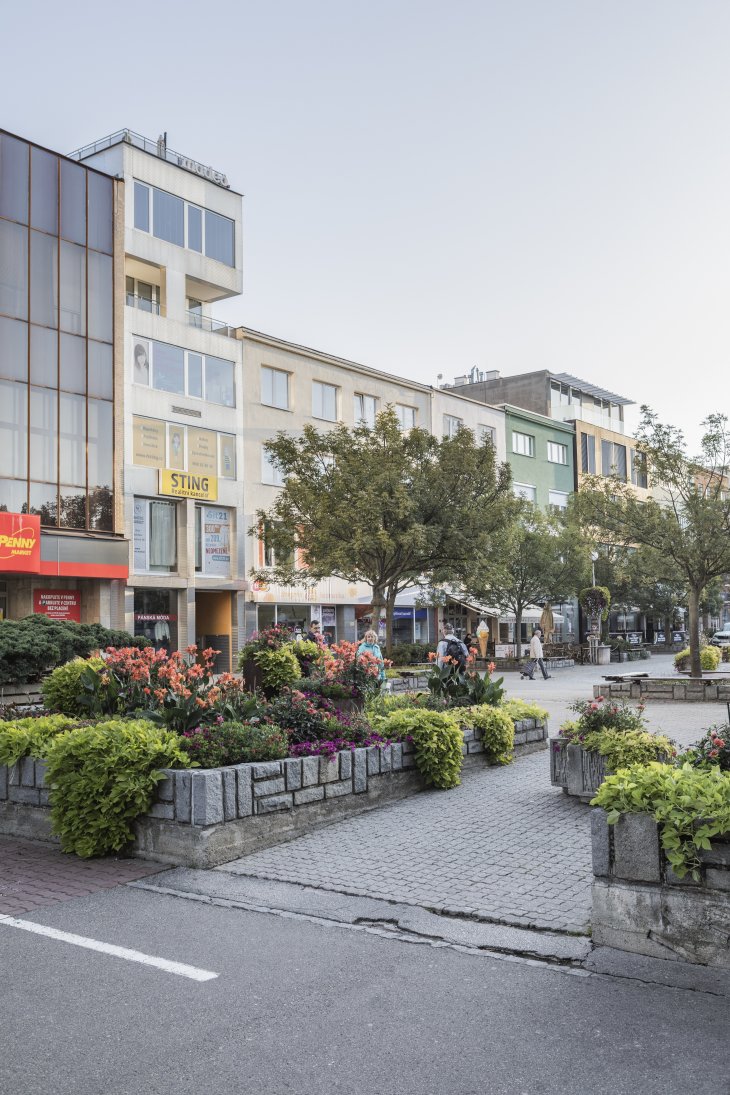