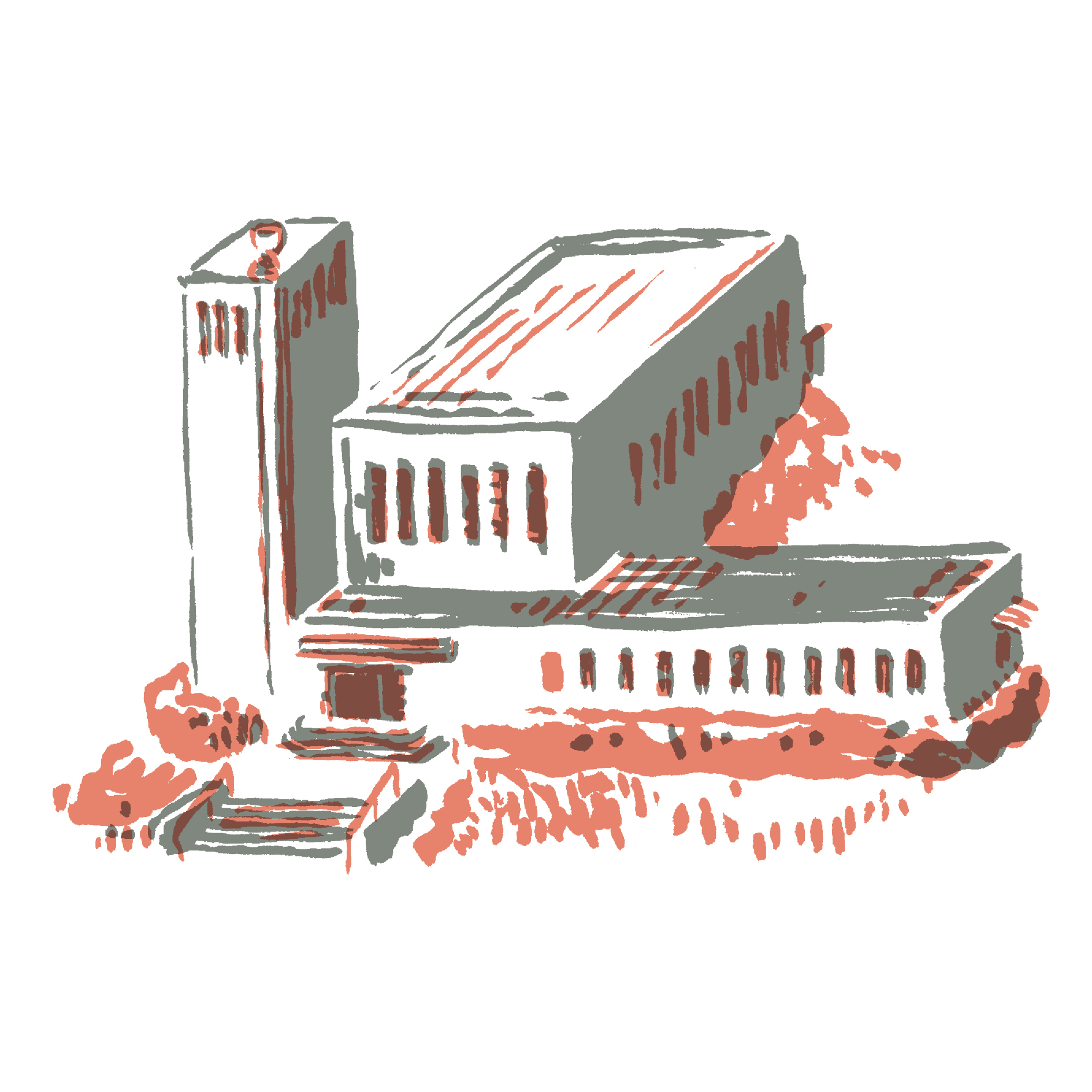 The formation of the Zlín Evangelical Church as an institution dates back to the 1920s and 1930s. The arrival of a large number of employees in the Baťa company from all corners of the country led to a sharp increase in the number of Protestants.
From the beginning of the 1930s, representatives of the Zlín Evangelical Church tried to obtain a suitable plot of land in the wider city centre for the construction of a place of worship. The service hall in a small house on Hluboká Street, operating since 1928, soon did not meet the needs of a growing community. Generous ideas about the creation of a large area with a church, houses for pastors, a churchman, and a larger building for youth meetings were embodied in several sketches by construction assistant Josef Zelinka in 1934. The implementation was hampered by high land prices, especially when most of the vacant building plots were immediately bought by the Baťa company for its own uses. The only viable way forward was to cooperate with the local government. The mayor Dominik Čipera supported the construction and probably thanks to his influence the Baťa company decided to sell a sloping triangular plot of land between Štefánikova and Kamenná streets (today Slovenská) for a good price. The Evangelical Church received a complete project free of charge in 1935, thanks to which the company was able to fundamentally influence the appearance of the future church, the ecclesiastical dominant of the functionalist city. This was matched by its location in the newly-formed eastern part of Zlín on the edge of the Díly district of Baťa's houses.
At the beginning of 1935, the city, or rather the Baťa company, commissioned the task of designing the church to the architect Vladimír Karfík, who had already realised, for example, the church for Petržalka in Bratislava (1930). Here, too, he used factory-standard construction modules and designed a simple triple nave basilica with a low tower above the entrance. Other projects for churches remained unrealised - Prštné, Otrokovice-Baťov. It was not until 1949 that a Roman Catholic church in Slovakia in Partyzánske was built, according to Karfík’s plans originally intended for Otrokovice.
In October 1936, the city issued a building permit for a church carried out by the builder (and member of the Evangelical Church) Josef Winkler. On Easter Monday, 1937, the grand opening of the new church took place.
Vladimír Karfík skilfully placed the building on a sloping plot, creating a visually attractive and dominant urban element within the surrounding buildings. The whole ensemble consists of three penetrating prisms/cubes, whose shape is defined by their function. The visually-prominent horizontal line consists of a smaller hall and the entrance area of ​​the church, running parallel to Štefánikova Street. The architect used the natural slope of the terrain for the main nave with an unusually-composed stepped arrangement of benches. The main hall is covered by an iron lattice structure. The dominant vertical feature is the bell tower topped by a chalice in a highlighted corner. The dynamic of the whole building is aided by vertical strips of window openings composed of square prefabricated fields. It is a motif used in both the minor and the main hall. Due to the high costs, the originally-proposed textured plaster was abandoned in favour of the cheaper smooth lime-cement plaster. The main hall, completely free of artistic decoration, is united by the use of dark wood for the pulpit, and simple benches. The lighting was provided by simple lights on the side walls. The cleanliness of the space was disturbed only by the use of large cast iron stoves in the corners of the hall for heating. The austerity of external shapes and internal equipment corresponds well with the theological emphasis of Protestantism.
The main entrance from Štefánikova Street leads to the vestibule, which is visually dominated by the space of the former cloakroom. From here, two symmetrically-placed staircases lead to the main hall, which unusually end in the central space of the temple, by the pulpit and the table of the Lord. The main hall has another entrance, from Slovenská Street. Here, at the entrance, the relatively robust cabinets with an organ for the choir, installed in the 1970s, stand out. This is the most spatially significant modification realised during the entire existence of the church, if we omit the replacement of the lime-cement facade with textured plaster, which, moreover, corresponded to the original intention of the author of the building.
The small hall, accessible from the lobby, serves various purposes. At present, it is the main space of worship of two other churches - the Church of the Brethren and the Czechoslovak Hussite Church. At the front of the hall there is an abstract wooden sculpture, while on the side wall there is a triptych by Lubomír Jarcovják. The main hall has undergone several artistic transformations. At present, the painting The Merciful Samaritan by Miroslav Hanák is installed here, and in accordance with the evangelical tradition, the graphic design of Pavel Falátek contains quotations from biblical texts. The former cloakroom space in the entrance hall is now used for the gallery (redesigned by Ivan Bergmann, 2007). Recently, there has been a sensitive renovation of the red floor typical of Baťa architecture, while the interior furniture (benches, torches, pulpit, doors, fittings) is original. In 2016, a bell from the workshop of Josef Tkadlec was installed in the bell tower.
The Evangelical Church, together with the more-recently built Social House - Díly (V. Karfík, 1936, today called Malá scéna) belong to the fundamental pre-war public buildings in this part of the city. With its balanced proportions and functionalist simplicity, it fits into the urban context of Baťa's Zlín, while the omission of the most typical visual element - face bricks – sets it apart. The quality of Vladimír Karfík's architectural design is evidenced by the authenticity with which the church has been preserved to this day.
DV
More photos 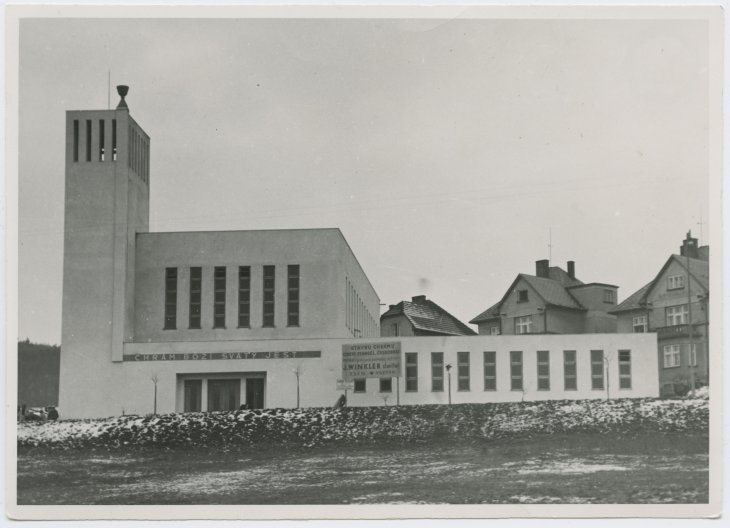 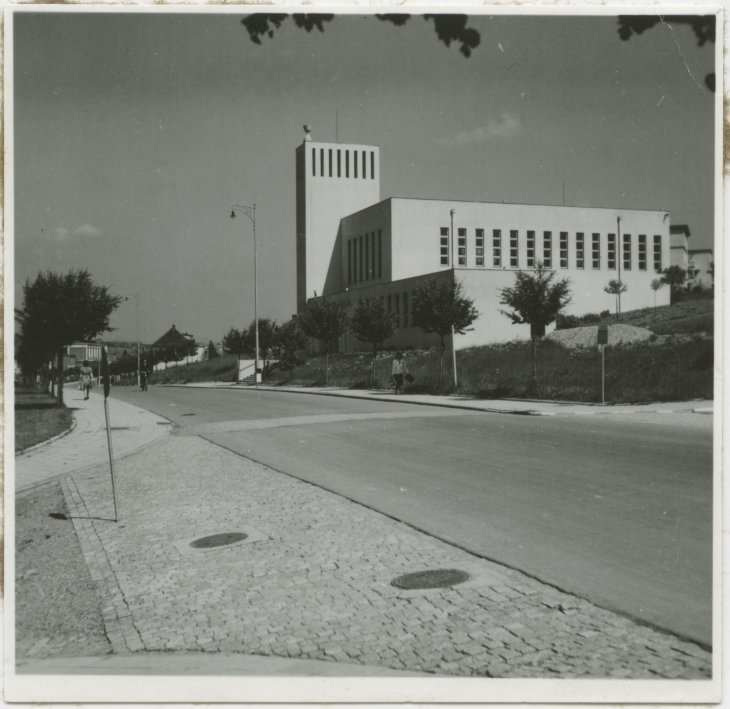 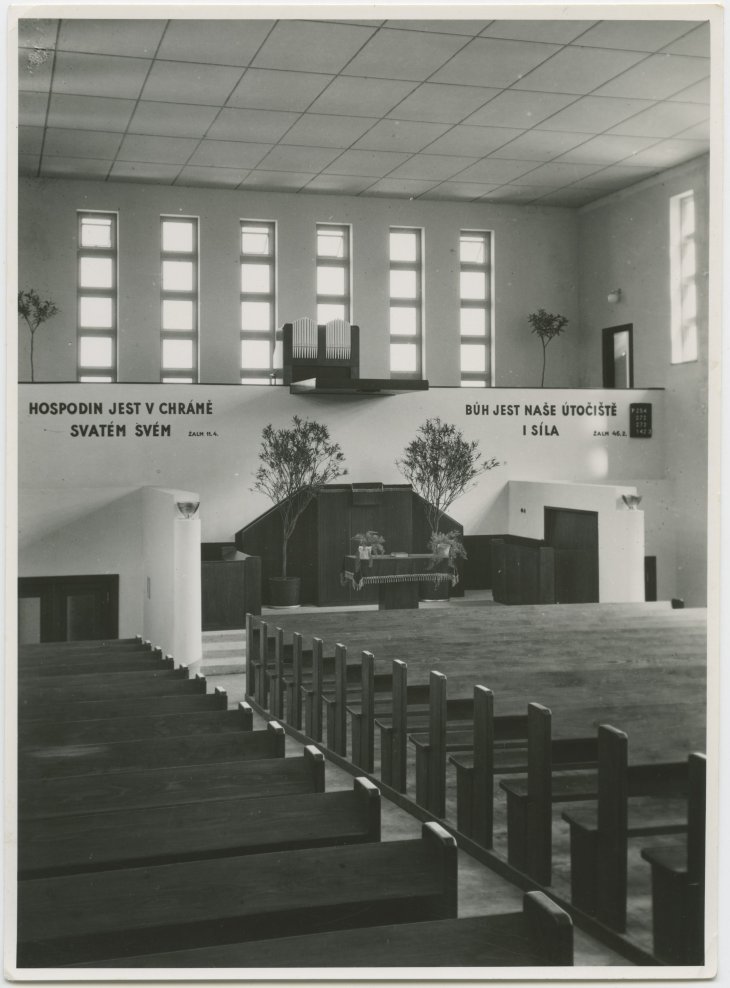 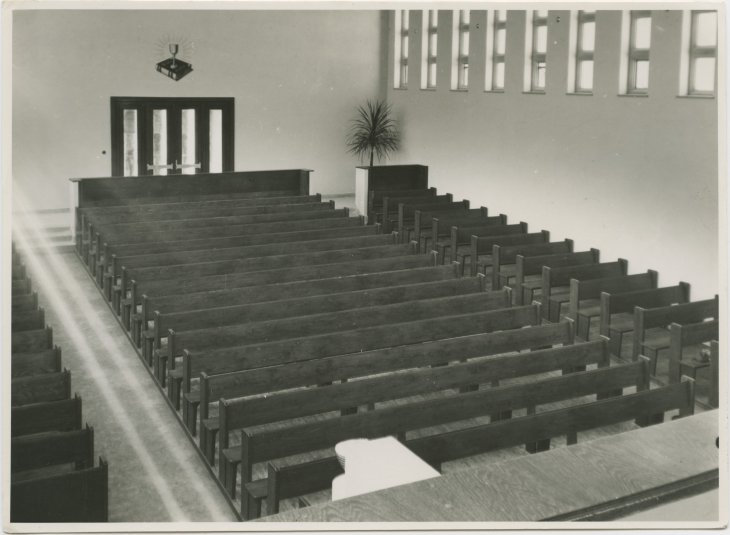 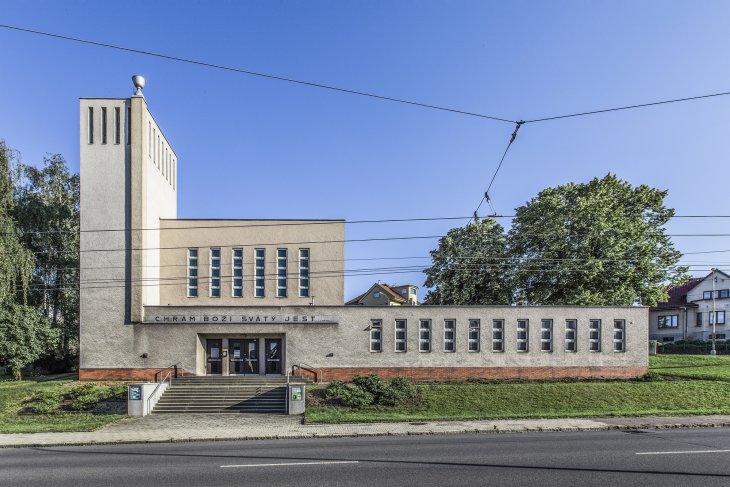 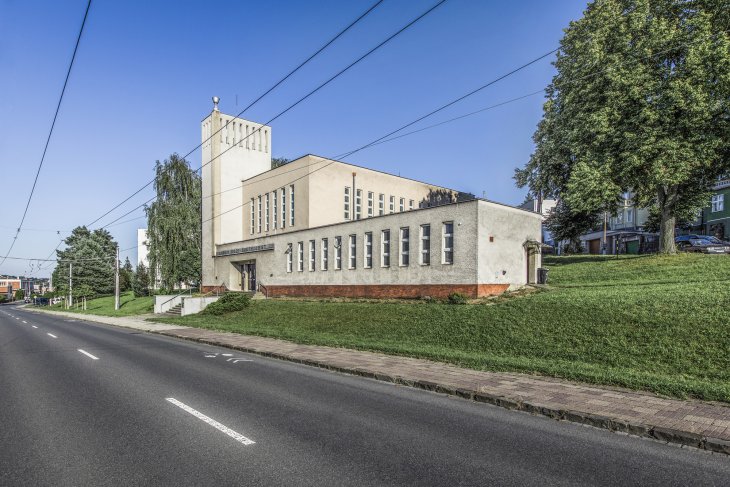 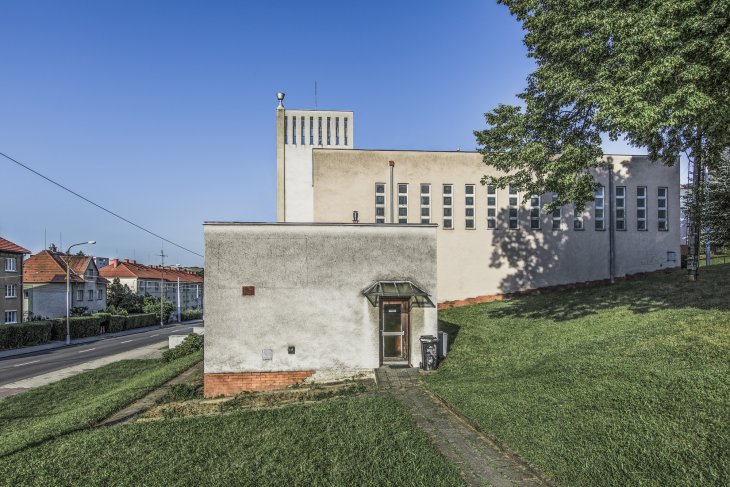 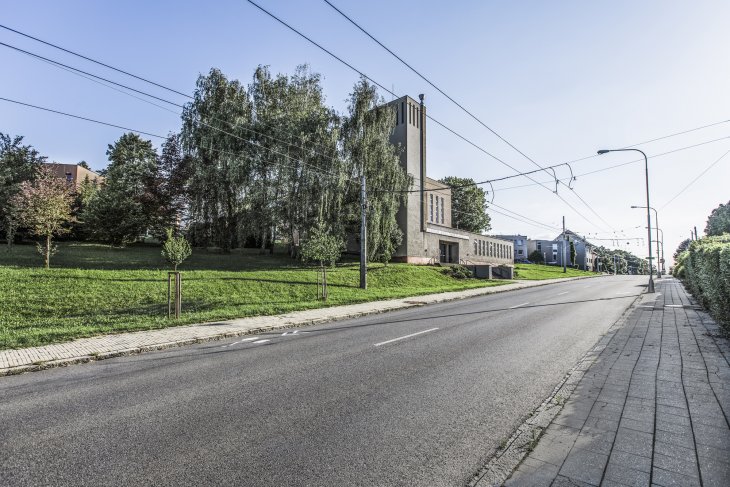 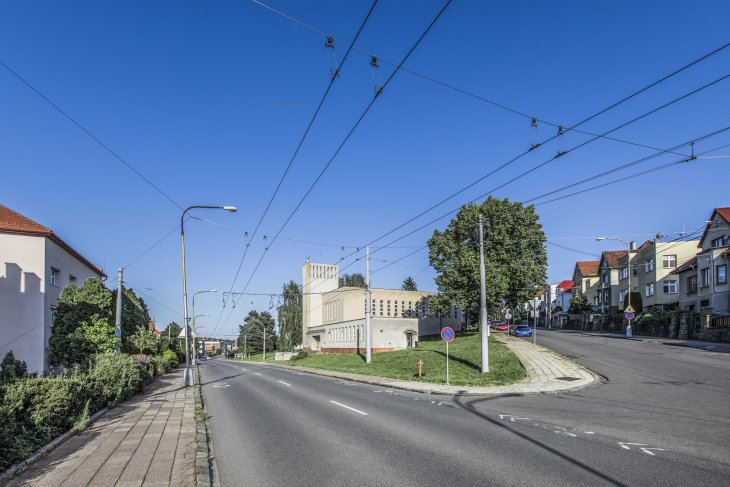 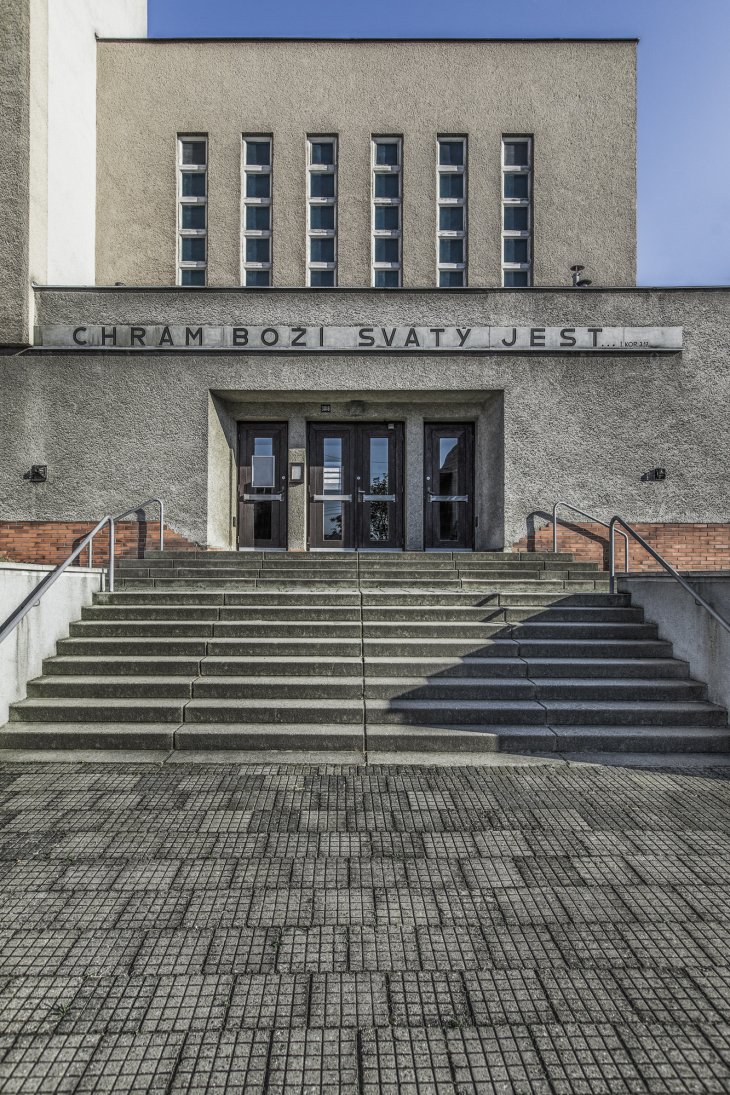 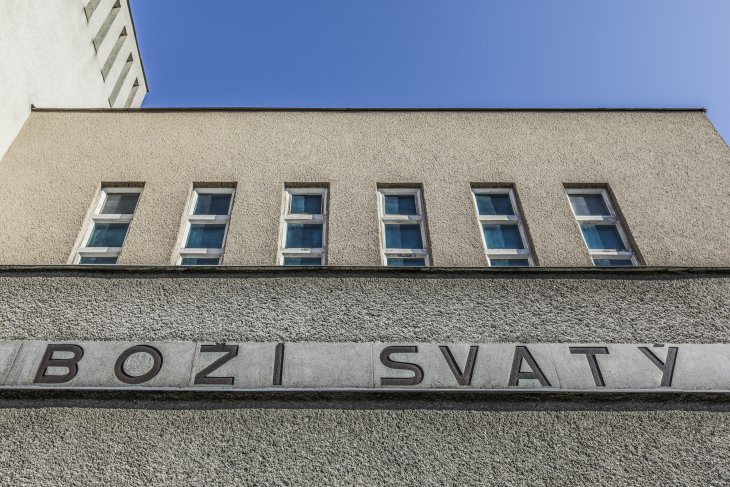 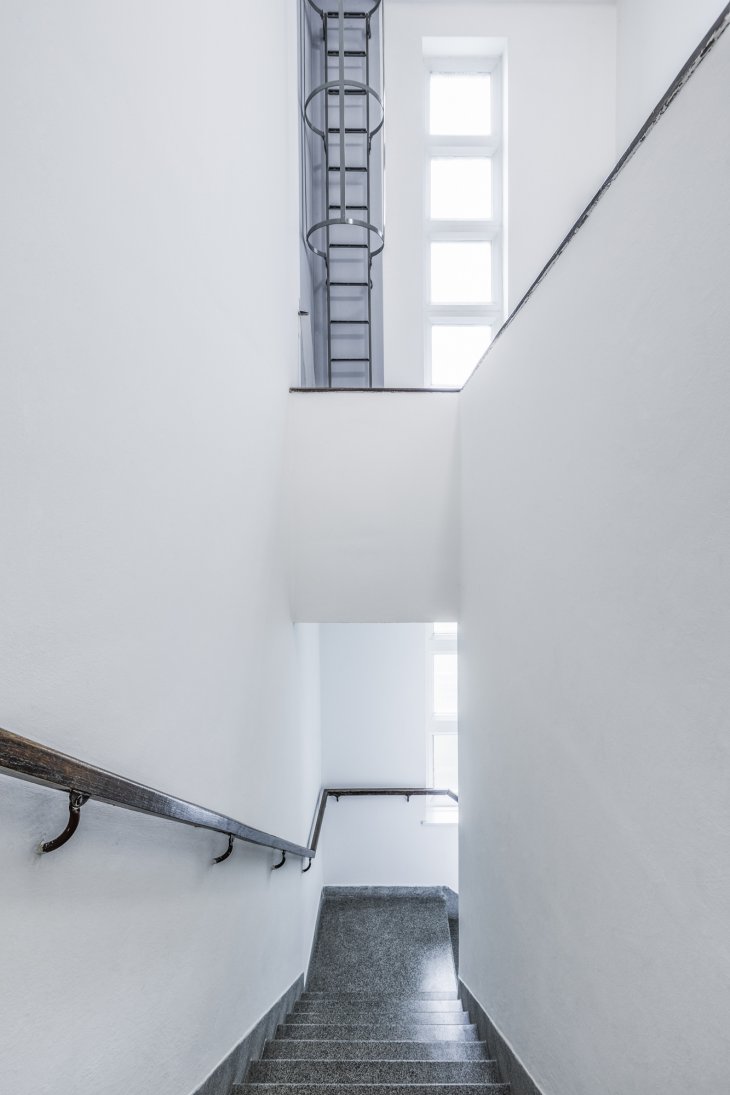 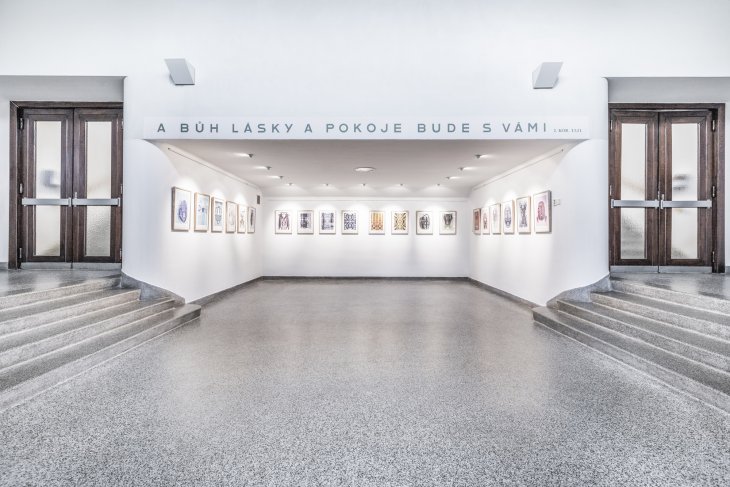 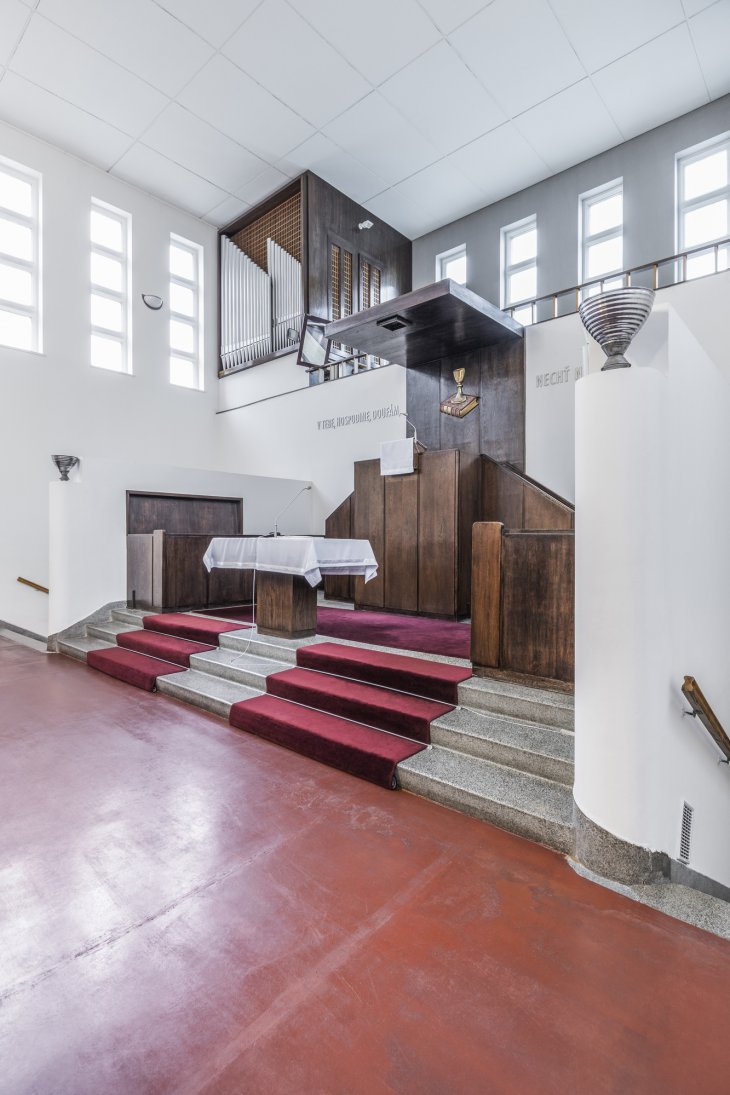 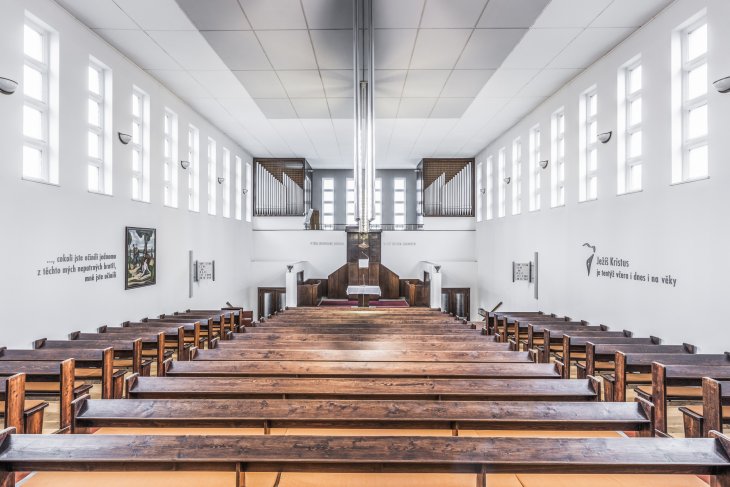